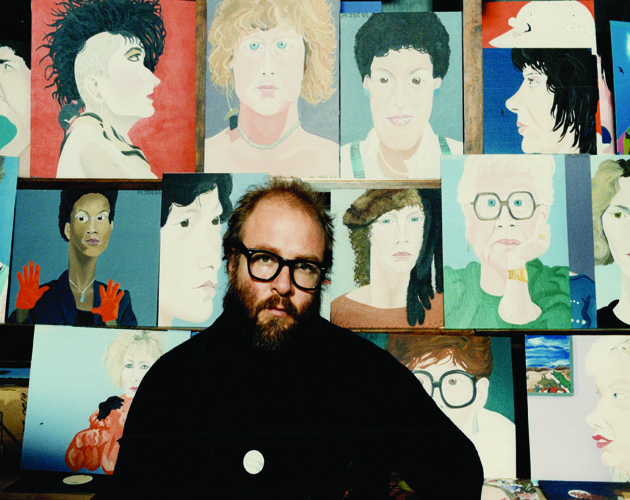 Capturing the core of who exactly Mendelson Joe is proves infinitely more challenging than I’d imagined and far more difficult than the artist himself makes it look when he paints portraits of the famous and infamous—at least in his eyes—from Margaret Atwood to Brian Mulroney.

The former gets Joe’s trademark head and shoulders treatment with pale skin and a gaze that seems to know that I never actually finished The Blind Assassin. The latter boasts a derrière where his face should be, part of a series of politicos who clearly haven’t earned Joe’s vote. It’s a unique interpretation but not out of character for this artist-activist-wandering troubadour. “The gift that I have is that I’m not daunted by trying things,” he says, before quipping, “but don’t ask me to fix your car.”

Joe’s work hangs in government and private collections and fills various tomes. Just this year, he released his latest book of portraits, aptly called Joe’s Neighbours (available in stores and online), featuring artists, aspiring politicians, physicians, a sex shop owner, a woman who gave him homemade pickles and others in his neighbourhood.

Did I mention his neighbourhood is a forest in the Almaguin Highlands, north of Muskoka, Ont.?

Or that Joe, who turns 72 in July, prefers sending postcards to email (he doesn’t own a computer)? That his “idea of great recreation is going for a walk…my idea of a good time is breakfast”? That I’m not sure how to address him—Mr. Joe? Mr. Mendelson? (For the record I went with, simply, Joe.)

“I have no idea how I got here, this way, other than I kept doing it,” he tells me. “The key to my trip is seize the opportunity…and go with it as far as it’ll go.”

Joe’s trip began in 1944 in Maple, Ont. As a teen, he hitchhiked across the country, winding up in Calgary where he launched a modest music career. “Life, for a lot of us, sometimes we just stumble with grace,” he says, describing the day in 1975 when he found acrylic paints his mother had thrown in the trash. By year’s end, he’d completed around 100 paintings.

“I just try to paint what’s important, which is how you exist and how you see,” he says. “When you have to figure stuff out…you might just use painting something as the method of finding your way to a better place.”

Art wasn’t always easy for Joe—he spent nearly two decades living and working in Toronto storefronts. In the late 1990s, a family inheritance allowed him to purchase his forest home where “I live exactly how I’ve been living all along…very frugally.” The only dramatic change is that he sold his motorcycle. Oh, and “The moron count is much lower out here.”

Between supporting various organizations, like the Alzheimer’s Society, the Centre for Addiction and Mental Health and Waterkeepers, and his art, he serves as the embodiment of the advice he offers anyone of his generation with a passion that remains unfulfilled.

“As far as I know I have one shot at this existence before I become fertilizer. So I believe you gotta dare,” he declares. “Go for the jugular.”

Just don’t ask him to fix your car.

A version of this article appeared in the July/August 2016 issue with the headline, “Portrait of the Artist,” p. 13.