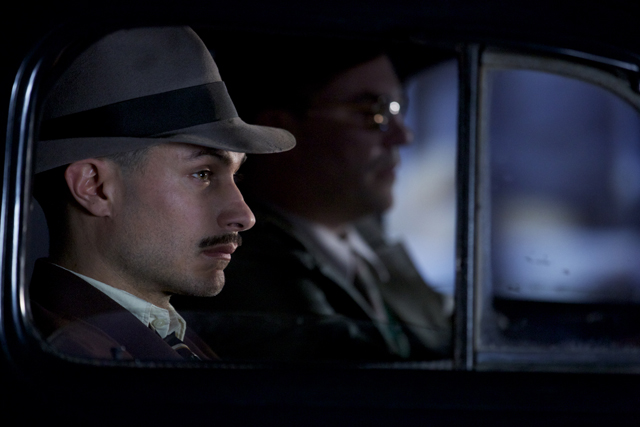 Gala Gawking: The U.K./South Africa/Canada production THE JOURNEY IS THE DESTINATION chronicles the life of Africa-based activist and photojournalist Dan Eldon while Gerard Butler and Willem Defoe duke it out in the corporate world in THE HEADHUNTER’S CALLING.

The Sleeper Hit: The life of Canuck acting legend Gordon Pinsent, 86, gets the documentary treatment in THE RIVER OF MY DREAMS: A PORTRAIT OF GORDON PINSENT. Oscar-winning director Brigitte Berman fuses stop motion animation with interviews with Pinsent’s family and famous friends, including Christopher Plummer, Mary Walsh and Norman Jewison, to tell the story of the actor’s life, from Grand Falls, Newfoundland, to Hollywood.

150 MILLIGRAMS: Emmanuelle Bercot, 48, wrote, directed and stars in this French tale of a doctor who takes on Big Pharma following a spate of patient deaths. Based on the memoir by Irène Frachon.

AUSTERLITZ: Holocaust history and commercial tourism collide in a film that examines Nazi death camps and the tourists who visit them.

GIMME DANGER: Director Jim Jarmusch tackles the history of Iggy Pop and The Stooges from the 1960s through to the 2000s in this rocking doc making its Noth American premiere at TIFF.

NERUDA: This fictionalized version of Nobel Prize-winning poet Pablo Neruda’s life in the Chilean underground following the outlawing of communism in the 1940s is a co-production of Chile, Argentina, France and Spain.

WAKEFIELD: A man runs away from his life and family by hiding in his own attic, observing his loved ones while retreating into his own thoughts in this drama that stars Bryan Cranston and Jennifer Garner and based on a short story by E.L. Doctorow.

Think outside the [Light]box: Marlon Brando directed one film in his life – ONE-EYED JACKS – after Stanley Kubrick dropped out of the film. He also starred in the 1961 western, alongside Karl Malden, and now a freshly-restored version, courtesy of Steven Spielberg and Martin Scorsese, screens at TIFF today only at 6pm.

Snapshot: Brotherly love on the red carpet – director Jonathan Demme and Justin Timberlake bond at TIFF ahead of the gala for their concert film JUSTIN TIMBERLAKE + THE TENNESSEE KIDS.