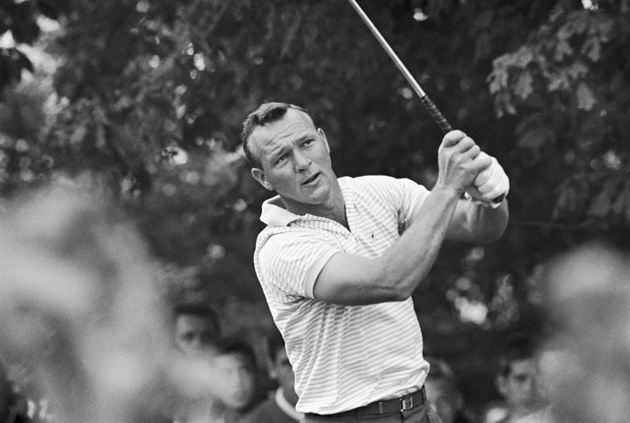 The passing of golf legend Arnold Palmer at 87 on Sunday (September 25, 2016) evoked a flood of tributes from both current and past greats, remembering the man whose style, skill and passion entranced television audiences and put the sport of golf on the map.

Palmer, who was born in Latrobe, Pennsylvania in 1929, grew up caddying at the local course, which he would later buy years later after he’d achieved greatness.

Until Palmer came around, golf was a sport largely played by patricians, politicians and wealthy businessmen. Palmer, on the other hand, was a regular guy who played with used clubs and had a funky swing, yet still managed to climb to the top of his profession. It was due to these factors, as much as his talent, that brought golf to middle-class America.

His first pro win came at the Canadian Open in 1955 and he went on to win a total of 92 times, including 62 on the PGA circuit—fifth all-time.

But it was his rivalry with Jack Nicklaus and Gary Player in the ’60s that made him a revered figure in golf history and catapulted the game into national prominence. And, despite the fact he became a household name, a product pitchman and friends to the famous (Frank Sinatra, Bob Hope, Muhammad Ali and (golf fanatic) President Dwight Eisenhower, he never lost the common touch, always taking time to have a word with fans or sign autographs.

Nicklaus, who would go on to surpass Palmer’s greatness, remembers those competitive days fondly: “We were great competitors, who loved competing against each other, but we were always great friends along the way. Arnold always had my back, and I had his. We were always there for each other. That never changed. He was the king of our sport and always will be.”

Despite being one of the greatest of all time, Palmer played before the big-money era, his career winnings topping out at $2 million. To put this in perspective, on the day Palmer passed away, Rory McIlroy won the Tour Championship and FedEx Cup title, pocketing $11.5 million in the process.

For Palmer though, it was never about the money or fame, though he had both in abundance. Instead, he was driven by a love and quest for perfection of a most difficult game, illustrated by the fact he still went out and hit balls almost to his dying day. “What other people may find in poetry or art museums,” he once said, “I find in the flight of a good drive.”

The King is dead. Long live the King.