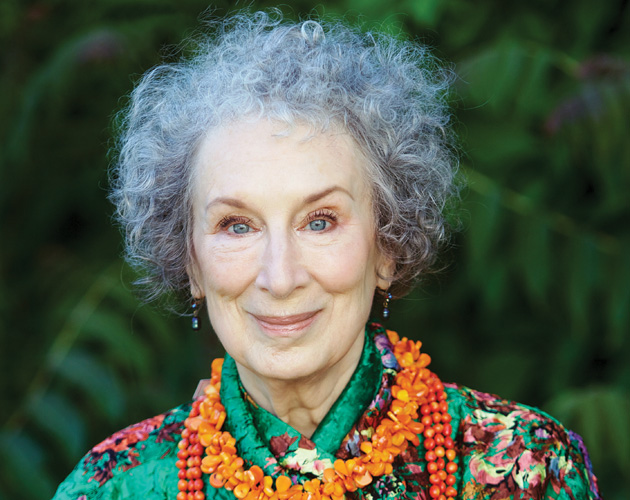 Few scribes today are as in demand, across so many genres as Margaret Atwood—no surprise really, given the author’s penchant for exploring new media through her work.

To start, she has two novels being adapted for small-screen series’ set to debut in 2017: The Handmaid’s Tale, starring Mad Men‘s Elizabeth Moss, on Hulu; and Alias Grace, adapted by Canadian Sarah Polley and starring fellow Canucks Sarah Gadon and Anna Paquin, on Netflix and CBC. Atwood even makes a cameo in the latter, which she revealed first exclusively to Zoomer in July.

On the book front, her latest novel Hag-Seed, a retelling of Shakespeare’s The Tempest, hits bookshelves in October. But perhaps her most intriguing new project is one that sees Canada’s first lady of letters break new literary ground—the graphic novel. Atwood’s first graphic novel, Angel Catbird, about a half-bird half-cat hero, also helps raise awareness about protecting the lives of both species in local communities. The 76-year-old recently spoke about it with Zoomer.

Mike Crisolago: You’ve been a fan of comics since childhood. Did you have a favourite?

Margaret Atwood: I was a Batman person…but my all-time favourite was probably Plastic Man because he was funny.

MC: Did you ever imagine you’d write a graphic novel?

MA: No, I didn’t, but then it became obvious that I could. I was going to need an illustrator because although I started drawing flying cats with wings when I was about six—it’s obviously been on my mind for some time—I wouldn’t have been able to draw anything that professional.

MC: You once quipped that you’re “supposed to be a nice literary old lady” who rests on her laurels in her rocking chair, not writing comics.

MA: Well, artists don’t retire…If you’re self-employed, nobody says, “Time for you to leave,” and therefore there’s no reason not to continue to explore new areas. Somebody said to me on Twitter, “She got old.” And I said, “Better than the alternative.” You get old or else you die. So, me, I’d rather get old.

MC: You presented Angel Catbird at Comic Con. What was that experience like?

MA: The comic people are pretty accepting unless, of course, you were dissing comics. But I grew up in the comic culture. Pogo was a huge deal in the ’50s and took on McCarthyism, and everybody followed Li’l Abner. There were all of these wartime comics and, in Canada, there were these black and white ones, a lot of Nazi fighters amongst them. Wonder Woman…was a big Nazi fighter in her day—went in to fight the Nazis without a top on, practically, which I wouldn’t have done. But never mind that.

A version of this article appeared in the October 2016 issue with the headline, “Atwood Gets Graphic,” p. 14.