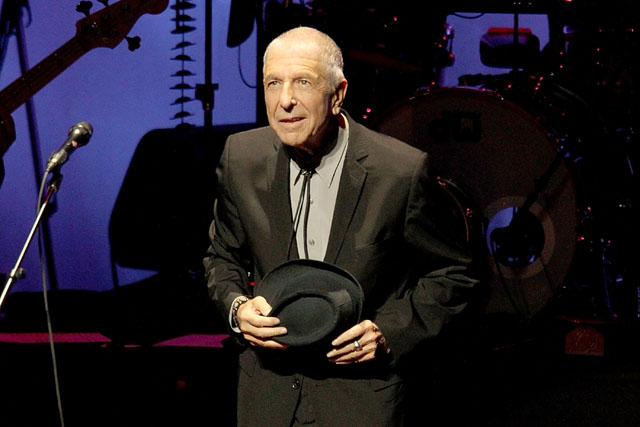 We knew it was coming. He warned us in July with his letter to his dying muse Marianne Ihlen, “it’s come to this time when we are really so old and our bodies are falling apart, and I think I will follow you very soon,” and again in a more recent New Yorker interview, “I am ready to die. I hope it’s not too uncomfortable. That’s about it for me.”

None of us, however, wanted to believe it. A few weeks ago, at a press event in Los Angeles for his brilliant new album You Want It Darker, Leonard joked that perhaps all his recent talk of being ready to die was an exaggeration. And now, at 82, as You Want It Darker gains even more acclaim, he’s suddenly gone. We didn’t want it that dark, Leonard.

At a moment like this, when words barely come, I turn to Leonard’s poem “For Anne,” which I read for the first time in my early 20s, while on a bus in Toronto, not in a book but on a literary supplement – Poetry on the Go – which ran alongside the paid advertisements that lined the interior of the vehicle. Literary providence – I happened to be standing at the right pole on the bus, below the lines of this poem I’d never before seen:

whose eyes to compare

with the morning sun?

Not that I did compare,

But I do compare

What struck me most was how Leonard encapsulated the entirety of human suffering in six lines. The despair and regret and torment and loss other writers take entire novels or plays or operas to convey, Leonard needed only six lines. I’m going to need a few more.

An aspiring writer, I knew that I’d spend the rest of my life trying to craft lines that perfect. I was also determined to learn more about the man behind them, his beginnings in Montreal, his time among artists and lovers in New York and Hydra, his writings and his Buddhist escape to Mount Baldy. Before that fortuitous literary encounter I’d always fantasized about the type of dark yet cool, attractive yet distant writer that I hoped to become. It was only after discovering the legendary troubadour that I realized that this whole time I’d basically aspired to grow up to be Leonard Cohen.

From then on, Leonard’s life and work affected me immeasurably. When a girlfriend’s father passed away we held each other and swayed slowly to “If It Be Your Will.” I joined sold out concert crowds in singing “Hallelujah” in unison with the singer himself. I wrote a “Leonard Cohen” character into one of my plays, performing him myself, and I even made trips to Montreal in a vain attempt to channel his creative spirit while secretly hoping to perhaps, just maybe, bump into him during a stroll along Saint Laurent Boulevard. But to me, a fan coming to know him later in his life, the most astonishing thing about Leonard Cohen is that the first 71 years of music and poems and awards and honours was merely the prelude to his most incredible final 11.

From 2005, when he discovered his manager had bilked him of $5 million, Leonard Cohen enjoyed a renaissance of the type that is virtually unheard of in popular music. He wasn’t an act like the Rolling Stones, or Bob Dylan, who were still performing into their 70s. He’d quit. He was done. He was living a happy, solitary existence on Mount Baldy when fate lured him back. And then he wrote new songs and compiled new albums that were just as brilliant, if not more so than what had come before. He attracted a new generation of fans, sold out world tours and reached a level of popularity he’d never approached in the past.

Last year I spoke with Booker Prize-winning writer Kazuo Ishiguro, author of The Remains of the Day. He’d been listening to Cohen’s 2014 album, Popular Problems, and told me,

“I was absolutely staggered by it, that a guy can do that at that age. There’s one particular song called “Did I Ever Love You?” I think it’s one of the greatest songs he’s ever written. He’s changed. He’s not trying to just be a kind of version of himself when he was younger… Cohen is an exemplary example of brilliant great late style. It’s just the ability not only to perform at that level, but to keep producing these incredible songs. He’s moved on and he hasn’t tried to just do (things like he did) 30 years ago. He fully occupies where he is now and the work comes out of that.”

Today, anyone who was a fan of Leonard feels the weight of this loss. It’s gut-wrenching. Most of my favourite Leonard memories are difficult to write about here, as they occurred in my dark bedroom, alone with his music or poetry, absorbing it, feeling it, appreciating it, healing with it. Leonard bore the burden of all of our sorrows, our fears, our broken hearts, transforming them into song and handing them back, lighter somehow, easier to understand, beautiful, if not raw. He was Canada’s greatest poet and a giant of literature in any language.

And now he’s gone, the troubadour in black slipping quietly back into the shadows. He sang once, “Don’t dwell on what has passed away.” Easy for him to say. Perhaps it’s better to think of this moment as similar to when Leonard climbed Mount Baldy – it’s an escape from the noise of this world in exchange for the peace and transcendence of a higher calling.

I’ve never compared such loss to climbing a mountain.

But I do compare