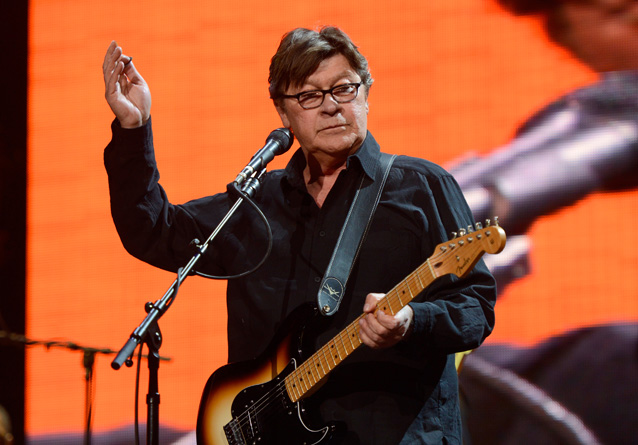 From his childhood in Toronto to penning some of music’s greatest tunes to playing alongside music’s biggest names to scoring classic films and his induction into the Rock and Roll Hall of Fame, Robbie Robertson, 73, is someone for whom the term “done it all” undoubtedly applies.

With the release of his new autobiography, Testimony, today, the former Zoomer cover subject tells the story of his life, up to the split of The Band, candidly, in his own words. To mark the release we’ve compiled seven things you might not know about the Canuck rock legend.

1) Robertson’s full name is Jaime Royal Robertson, and he earned the “Robbie” moniker as a nickname in school. It’s a play on his last name.

2) Robertson co-wrote the Band hit “Life Is A Carnival,” but in his early teens he actually worked at the freak show exhibit at the Canadian National Exhibition in Toronto, and also worked at another local carnival.

4) Robertson once described the unique sound The Band crafted as “rebelling against the rebellion” of music. He went on, “The rebellion went to a place where it became too obvious, too trendy, like you were just following the pack. So it was our choice to get off the bandwagon—no pun intended—and do things that were in our background and what was the most honest thing to do. In our music, there were all these influences from Canada to gospel music to the blues to rhythm and blues to rockabilly—everything was part of our gumbo.”

5) In the legendary, Martin Scorsese-directed documentary The Last Waltz, about The Band’s final concert, Robertson can be seen singing in the background but his microphone isn’t on for the majority of the show. However, he famously saved Eric Clapton during the same show on the tune “Further On Up the Road,” improvising a guitar solo as Clapton fixed his guitar strap that had come loose.

6) Robertson became friends with Martin Scorsese after The Last Waltz and has worked, in various capacities, on the music in a large number of the famed director’s films, including Raging Bull, The King of Comedy, The Color of Money, Casino, Gangs of New York, The Departed, Shutter Island and The Wolf of Wall Street.

Scorsese, meanwhile, directed the music video for “Somewhere Down the Crazy River,” a single off of Robertson’s first solo album Robbie Robertson.

7) Robertson was one of four famed Canuck recording artists/duos – the others being Bruce Cockburn, Kate McGarrigle & Anna McGarrigle and Ginette Renoto – to appear on a set of 2011 Canadian postage stamps.