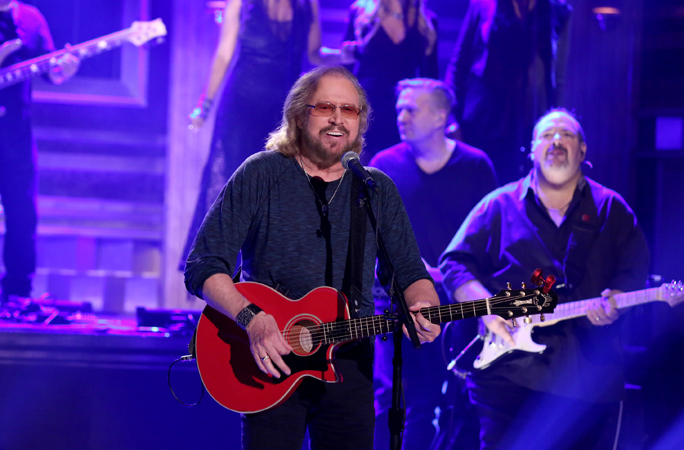 For the famed Bee Gee, turning 70 means putting past heartbreaks behind him to move forward and prove, “I’m not who you think I am. I’m what’s left of the Bee Gees, but I’m an individual performer.”

“Look at that lizard!” Barry Gibb exclaims, his eyes widening beneath the brim of a beige cowboy hat. The famed Bee Gee points to the French doors that lead to the oceanfront yard of his Miami estate, through which we watch as an iguana slinks along his back fence. The singer-songwriter, I note, must be used to large, invasive animals given his upbringing in his native Australia.

“You had everything else like deadly snakes and deadly spiders,” he recalls, “and we lived amongst them. And that was another adventure.”

“I guess it’s not that much different from the music industry sometimes,” I quip.

We share a laugh before returning to Gibb’s new album, In the Now, only the second solo release of his illustrious 60-year career, and it becomes clear that time—and the emotional footprints it leaves behind—is clearly on his mind. Or, as Gibb clarifies, the denial of time.

“We’re just struggling through this thing. It’s the grand illusion,” he says. “Nothing is tangible and this very moment, in a second, we won’t be able to have that again.”

A stroll through his estate adds weight to the concept, be it the wall dominated with photos of younger days with famous friends like Michael Jackson, or a painting of John Lennon, or framed shots of the brothers Gibb—Barry and his late siblings Robin (who died in 2012 at age 62), Maurice (who died in 2003 at age 53) and Andy (who died in 1988 at age 30). Or even the knowledge that, a week before my visit, Gibb’s mother Barbara passed away. In the Now serves as an “emptying out,” an emotional demarcation point co-written and recorded with his sons Stephen and Ashley that allows him to move forward guilt-free. The disc’s final track, “End of the Rainbow,” which Barry sang for Robin as he lay in a coma, now stands as a goodbye anthem to all of his brothers.

Still, for an artist whose legacy has become indelibly linked to those he’s lost, Gibb defiantly looks ahead. “I’m the man who will not fade away, standing with my hand in the fire, feeling forever young,” he declares on “Home Truth,” a track from the new album. It’s his advice to himself, “blind ambition and bluster and damn it, I’m not who you think I am. I’m what’s left of the Bee Gees but I’m an individual performer.”

Gibb, who turned 70 in September 2016, feels he still has something to prove—”I’m still standing. I’m still making records”—and his sons say In the Now served as much more than just a collection of new songs.

“I think it’s absolutely necessary for his survival. This record more than anything was like [how] some people go to therapy,” Stephen 43, says. Ashley, 39, adds, “And him getting back on the horse.”

Gibb’s rebirth also hinges on the love that remains. “Children, grandchildren…All those things are in my life now.” He pays tribute to his wife Linda with the new tune “Star-Crossed Lovers” and proudly notes that Sept. 1—his birthday—is also his 46th wedding anniversary. And, of course, there’s his role as Grandpa Gibb. “It’s fantastic, because you get to sort of be a kid again through their eyes. They make me feel young. It keeps you from dwelling on yourself. It’s not so much the shrinking of my family, it’s the expanding of my family…And it goes on and on.”

In The Now is available in stores and online.