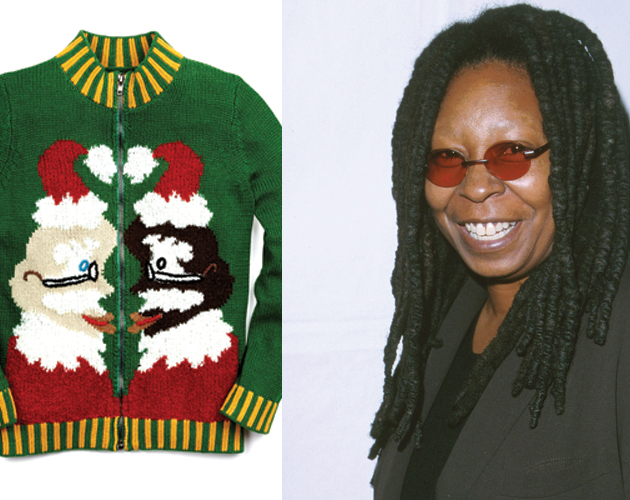 The 61-year-old co-host of The View launches her ugly Christmas sweater line at Hudson’s Bay.

But for her first fashion design foray, she focused on sweaters, with the launch of a collection of colourful and wonderfully wacky Christmas sweaters sold exclusively at Hudson’s Bay in Canada.

The 61-year-old co-host of the popular daytime talk show The View says she’s always loved Christmas sweaters and often wears them on the show.

“I really designed them for anybody who has a sense of humour and a sense of loving the holiday season.”

The sweaters, at $179, are a mixture of wool, alpaca, cotton and cashmere and feature a variety of whimsical illustrations that are eye-catching, if not humorous. In the tradition of “ugly Christmas sweaters,” they are loud, brash and delightfully tacky. One features a typical family holiday portrait except, on closer inspection, one of the kids is Martian green. Two Santas on a zip-up cardigan look like they are having a face-off until you notice their puckered lips and realize they are about to kiss.

“Holiday sweaters are meant to bring smiles to faces so you want them to be welcoming for people to wear,” says Goldberg. While she said she wasn’t out to make any deliberate statements with the sweaters, she did note that it should “remind us that we are just one human race.”

Just chalk fashion up as another interest of this multi-faceted performer who belongs to an elite group who has the EGOT—the Emmy, Grammy, Oscar and Tony awards.

She has many friends in the industry, including Vogue‘s flamboyant editor-at-large André Leon Talley, and attends New York Fashion Week, including walking the runway at one show this past season. And beyond her passion for footwear, she’s been known to wear some very cool duds—like a hoodie by Vetements, a Parisian brand that is currently hipper-than-thou and much coveted.

While Goldberg’s not about to give up her day job for the life of a fashionista, she is hoping for a holiday tradition. “I’d love to make brand new ones every year so that people can collect them and hopefully make them collector items.”

A version of this article appeared in the December 2016/January 2017 issue with the headline, “Making Whoopi”, p. 14.