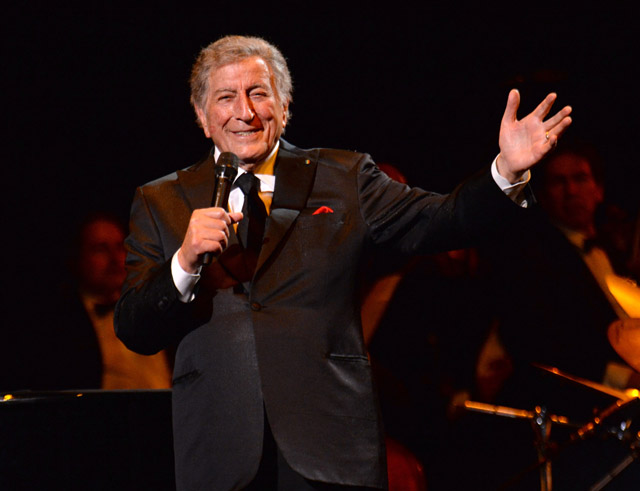 It was one of those perfect September afternoons in New York—clear skies, a crisp wind and the sunlight illuminating the columns along the front of the flagship branch of the city’s public library, the Stephen A. Schwarzman Building, which commands the corner of Fifth Avenue and 42nd Street in Manhattan.

However, I had no time to join the throng of assembled tourists admiring the New York insitution as I hurried to make a date at another institution—Radio City Music Hall—to celebrate yet a third Big Apple institution, Tony Bennett.

Though he celebrated his 90th birthday this past August, the stars aligned for a spectacular tribute to Bennett that afternoon. By stars I’m of course speaking of the Hollywood, not celestial, variety—names like Stevie Wonder, Kevin Spacey, Leslie Odom Jr., Andrea Bocelli and Bennett’s most famous recent collaborator and friend, Lady Gaga, with whom he recorded the 2014 album Cheek to Cheek, making the crooner, at 88, the oldest Grammy winner in history.

The stage also boasted an impressive Canadian contingent, from the legendary k.d. lang to Michael Bublé to Rufus Wainwright and Diana Krall—all part of the contingent that performed Bennett standards and paid tribute to the elder statesman of American music in a television special, Tony Bennett Celebrates 90: The Best is Yet to Come, taped to air this Tuesday, Dec. 20, on NBC.

“I loved it. In fact, I love performing in Radio City more than any place in the world,” Bennett, a former Zoomer cover subject, who started performing as a young man at restaurants in his native Queens, told me a few days after the taping. “It’s such a great theatre, the way it was designed. It’s always a joy to be in that theatre, and then to have all those great artists, one after another. Each one was a show stopper. I just loved the whole moment.”

The celebration took place during a simpler—pre-presidential election—time in America, where the evening’s host, Alec Baldwin, not yet notorious around certain gold-gilded New York penthouses for his Saturday Night Live impersonation of U.S. President-elect Donald Trump, resurrected another of his famous SNL characters—Tony Bennett himself—which he performed throughout the evening, including alongside the real-life singer.

Highlights of the show are many, from Lady Gaga’s “The Lady is a Tramp” to Kevin Spacey bringing the house down with a musical performance that harkened back to his commanding role in the 2004 Bobby Darin biopic Beyond the Sea to Stevie Wonder rocking the Hall and leading a final blowout number with all of the evening’s performers. Even Bennett himself took the stage, banging out a few American Songbook classics including “The Good Life” and his most famous tune, “I Left My Heart In San Fancisco.”

Unannounced celebrity guests popped in throughout the evening as well—I won’t spoil all the surprises here—while taped tributes from Elton John, Billy Joel and others aired during the performance.

Perhaps the most touching moment of the night, however, came during one of the first set of commercial breaks, when the live crowd broke into a spontaneous rendition of “Happy Birthday,” serenading the star until he stood up, with his wife, Susan Bennedetto, from their seats near the front of the auditorium to offer a wave of gratitude.

Bennett, rightfully so, feels blessed, noting that while he believes the media focus more on the younger generations of artists, “I just feel wonderful that at my age, at 90, I’m more popular now than I’ve ever been in my whole career.”

That’s not an exaggeration. Aside from his 2014 Grammy win and subsequent tour with Lady Gaga, and his upcoming TV birthday bash, Bennett continues to tour regularly, has a new CD boxed set, Tony Bennett Celebrates 90: The Deluxe Edition, as well as the CD that accompanies the NBC special, and a new book, Just Getting Started. He’s also rumoured to possibly sing alongside Lady Gaga at next year’s Super Bowl halftime show, an accomplishment that would make him the oldest performer in halftime history.

“I don’t know if that’s going to happen, but I’d love to do that. That would be beautiful,” Bennett says of a possible Super Bowl performance. “It’s a beautiful icing on the cake [of his career]. It’s something that’s never happened before.”

When it comes to staying so active Bennett credits his good fortune, joking that his doctor kicks him out of his office because he’s “too healthy.” Still, I ask him, why not hang up the microphone and retire to a life of painting, seeing the grandkids and watching the trees in Central Park—three of his favourite past times.

“I just love [performing]. I like to make people feel good. There’s so many things in life that bring the public down and make them unhappy and I try, the one hour that I perform, to lift up their spirits and make them feel good about life,” Bennett explains. “And when they feel good, I sleep well.”

Click here for our full interview with Tony Bennett about life at 90, music and what he feels he still has left to learn.