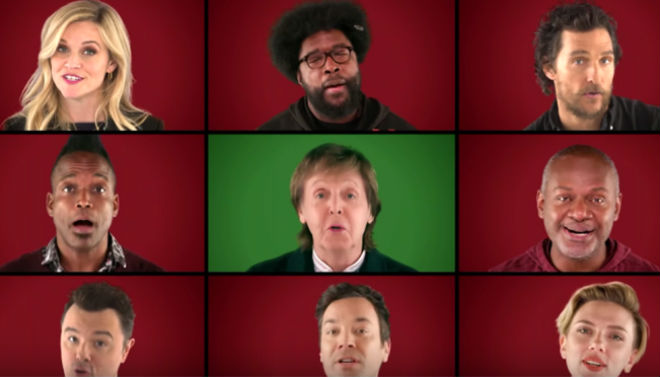 The former Beatles’ modern Christmas classic has a brand new a capella version…and features more than a few familiar faces.

The colourful video, shot like the opening credit sequence of The Brady Bunch, features the cast of the animated movie Sing as they join Jimmy Fallon and The Roots for an a capella rendition of the former Beatles’ hit Christmas song.

Fun fact: The song “Wonderful Christmastime” was originally recorded by McCartney in 1979 for his solo project McCartney II. However, the song only became a modern Christmas classic after it was added last-minute as a bonus track to the 1993 reissue of the Wings’ album, Back to the Egg.

So, to get yourself ready for this weekend, watch Jimmy Fallon and The Roots join Paul McCartney, Matthew McConaughey, Reese Witherspoon, Scarlett Johansson, Seth MacFarlane and Tori Kelly for an a cappella rendition of “Wonderful Christmastime.”