10 Most Memorable Quotes from the 2017 SAG Awards 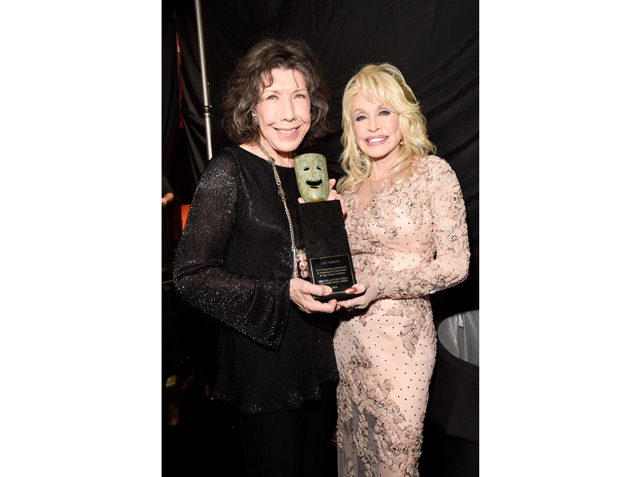 Going into the Screen Actors Guild (SAG) Awards on Sunday evening, there was one question on everyone’s mind—who’ll be tonight’s Meryl Streep? That is, who’ll use their acceptance speech to take a stand against U.S. President Donald Trump, as Streep did earlier in the month at the Golden Globes where she condemned both his divisive beliefs and policies? The answer—almost everyone.

The SAG Awards, presented by the Screen Actors Guild—American Federation of Television and Radio Artists (SAG-AFTRA)—honours performers in television and film, and this year’s ceremony, the 23rd annual event, will likely set the record for most Trump-related acceptance speeches per capita at an award show this year.

However, the speakers also managed another impressive achievement—none of the speeches came off as preachy or self-righteous. Instead, from Moonlight’s Mahershala Ali’s touching meditation on embracing our differences to Bryan Cranston’s hypothetical presidential conversation to Stranger Things’ David Harbour’s rousing call to action, the politically-charged speeches nailed the tone and emotion of a nation embroiled in an ugly immigration ban, not to mention the numerous other executive order theatrics that have resulted in Trump setting new record lows for presidential popularity.

Of course, some talents chose to go for humour over politics, so we’ve bundled them all together in a list of our favourite quotes from the 2017 SAG Awards.

1) “Good evening, fellow SAG-AFTRA members, and everyone at home, and everyone in airports that belong in my America. You are a part of the fabric of who we are. And we love you and we welcome you.”    — Ashton Kutcher, kicking off the ceremony

2) “Thank you. Whether the Russians did or did not hack the voting of tonight’s SAG Awards, I look out at the million or million and a half people in the room, and say, this award is legitimate, and I won. Landslide … I want you all to know that I’m the daughter of an immigrant. My father fled religious persecution in Nazi-occupied France. And I’m an American patriot and I love this country. And because I love this country, I am horrified by its blemishes. And this immigrant ban is its blemish and it’s un-American.” — Julia Louis-Dreyfus, accepting her award for Outstanding Performance by a Female Actor in a Comedy Series for her work in Veep

3) “We stand up here representing a diverse group of people, representing generations of families who have sought a better life here, from places like Nigeria; the Dominican Republic; Puerto Rico; Colombia; Ireland … And we know it’s going to be up to us and all of you, probably, to keep telling stories that show what unites us is stronger than the forces seek to divide us. We love you.” — Taylor Schilling, accepting the award for Outstanding Performance by an Ensemble in a Comedy Series for Orange is the New Black

4) “What August did so beautifully is he honoured the average man, who happened to be a man of colour. And sometimes we don’t have to shake the world and move the world and create anything that is going to be in the history book. The fact that we breathed and lived a life and was a god to our children, just that, means that we have a story and it deserves to be told. We deserve to be in the canon of any, in the center of any narrative that’s written out there. And that’s what August did. He elevated my father, my mother, my uncles who had eighth and fifth grade educations, and he just encapsulated them in history.” — Viola Davis, accepting the award for Outstanding Performance by a Female Actor in a Supporting Role for Fences

5) “What I’ve learned from working on Moonlight is we see what happens when you persecute people. They fold into themselves … You know, we kind of get caught up in the minutiae and the details that make us all different, I think there’s two ways of seeing that. There’s the opportunity to see the texture of that person, the characteristics that make them unique. And then there’s the opportunity to go to war about it, and to say that that person’s different than me and I don’t like you, so let’s battle. My mother’s an ordained minister. I’m a Muslim. She didn’t do backflips when I called her to tell her I converted 17 years ago. But I tell you now, we put things to the side. And I’m able to see her, she’s able to see me. We love each other, the love has grown, and that stuff is minutiae, it’s not that important.” — Mahershala Ali, delivering one of the most memorable speeches of the evening in accepting the award for Outstanding Performance by a Male Actor in a Supporting Role in Moonlight

6) “I’m often asked, how would Lyndon Johnson think about Donald Trump and I honestly feel that 36 would put his arm around 45 and earnestly wish him success. And he would also whisper in his ear something he said often, as a form of encouragement and a cautionary tale: ‘Just don’t piss in the soup that all of us gotta eat.'” — Bryan Cranston, accepting the award for Outstanding Performance by a Male Actor in a Television Movie or Miniseries for his portrayal of former U.S. President Lyndon B. Johnson in All the Way

7) “Lily’s getting an award I’ve been trying to avoid my whole life—a sag award … People have been saying for years that we should make a sequel to 9 to 5. I think that’s a good idea. We better get at it or pretty soon it’s going to be ‘Ninety-Five’.” — Former Zoomer cover subject Dolly Parton, bringing some levity to the evening in presenting Lily Tomlin with a Lifetime Achievement Award

8) “Don’t leave the house when you’re drunk. And if you’re already out there, well, you must learn to tell when you’ve had too much to drink. Listen to your friends when they stop talking to you and start talking about you, saying things like, ‘Did she have a purse?’ Don’t be anxious about missing an opportunity. Behind every failure is an opportunity someone wishes they had missed. Mind what Thoreau said, ‘Beware of any enterprise which requires new clothing.’ Doesn’t that ring sort of true tonight, to a few of you? It does to me. Live your life so that when you are being honored for your achievements the people called upon to make laudatory remarks can feel reasonably honest about their comments. Otherwise, in these times, all their words of phrase might be perceived as alternative facts. Or worse yet, fake news. Thank those people on whose shoulders you stand.” — Lily Tomlin offering advice to young people while accepting her Lifetime Achievement Award

9) “In light of everything that’s going on in the world today, it’s difficult to celebrate the already-celebrated Stranger Things, but this award from you who take your craft seriously and earnestly believe, like me, that great acting can change the world. It is a call to arms from our fellow craftsmen and women to go deeper, and through our art to battle against fear, self-centeredness and exclusivity of our predominantly narcissistic culture and through our craft to cultivate a more empathetic and understanding society by revealing intimate truths that serve as a forceful reminder to folks that when they feel broken and afraid and tired, they are not alone. We are united in that we are all human beings and we are all together on this horrible, painful, joyous, exciting and mysterious ride that is being alive. Now, as we act in the continuing narrative of Stranger Things, we 1983 mid-westerners will repel bullies, we will shelter freaks and outcasts, those who have no home. We will get past the lies, we will hunt monsters. And when we are at a loss amidst the hypocrisy and the casual violence of certain individuals and institutions, we will, as per Chief Jim Hopper, punch some people in the face when they seek to destroy the weak, the disenfranchised and the marginalized!” — David Harbour, earning a standing ovation while accepting the award for Outstanding Performance by an Ensemble in a Drama Series for Stranger Things

10) “This story is of unity. This story is that what happens when we put our differences aside and we come together as a human race. We win. Love wins every time.” — Taraji P. Henson’s beautiful sentiment as she accepted the award for Outstanding Performance by a Cast in a Theatrical Motion Picture for the film Hidden Figures