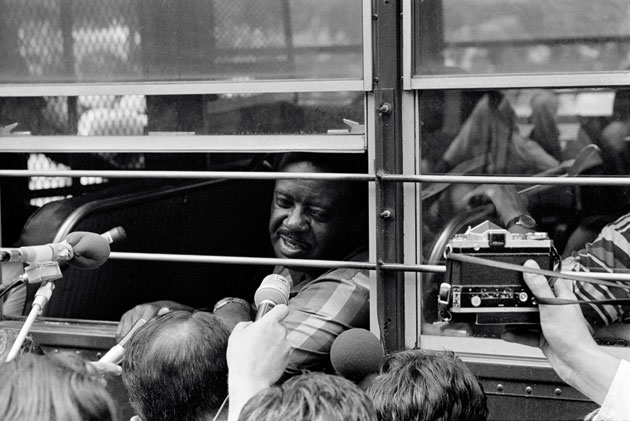 Rev. Ralph Abernathy, who co-founded the Southern Christian Leadership Conference with Martin Luther King Jr., on a police bus after being arrested during the Poor People's Campaign in Washington, D.C., in 1968. This is one of two photos of Laura Jones's on exhibit at the Smithsonian's National National Museum of African American History and Culture.

Photographer and activist Laura Jones celebrates the 50th anniversary of her arrival in Canada after fleeing the draft in America.

We drove across the border in John’s Volkswagen Bug. The address in Toronto was on our immigration papers so that was how, on our first night, the RCMP and FBI came and knocked on the door at the co-op rooming house where we were staying and asked to see our papers. Absolutely every single thing was in order. The FBI did not think the issue was over. They continued to monitor us for years.

But the RCMP officer said, “Welcome to Canada” and shook our hands.

The year was 1967, 50 years ago now, and I was the wife of a draft dodger. I was born in West Virginia, a twin. I went to a Quaker college for a year and met John Phillips. I was 19 when I married him. We spent months trying to get him into alternative service instead of going to Vietnam. We were unsuccessful. That’s what led us to Canada.

A year later, in 1968, I returned to Washington for six weeks to photograph Martin Luther King Jr.’s Poor People’s Campaign, his last planned protest. John could not return to the U.S. even for a visit as he had applied for and had been denied conscientious objector status. I went with a former college teacher of mine, a former junior assistant to King Jr., who was contracted to write a book about the campaign.

I had a false sense of security going back that first time. Crossing the border was fine, but immigration officers stopped me in Washington. A few weeks later, I was arrested, fingerprinted, went to court and released. Afterwards, I wasn’t a frequent visitor to the U.S. after I realized that I was targeted as the wife of a publicized draft dodger. Now I’m a Canadian citizen with a Canadian passport.

In the early days, John and I worked for the Company of Young Canadians, an organization to help people get involved in community building. We would teach photography to children with learning disabilities. It also provided the first opportunity to start following our passions in Canada, to present photography workshops. That led to our opening the Baldwin Street Gallery of Photography.

This year, our youngest son, Bennett, and I are reopening a gallery on Baldwin Street—the original closed in 1980. Although John and I divorced in 1988, the connections of being parents and photographers continued. We were working on a photography project about coming to Canada, video-interviewing war resisters, when he died of cancer in 2010. In the fall, we’ll show that exhibit.

Coming to Canada was the best decision that I ever made because I felt safe and I felt that I fit in. It was like going around the world without going anywhere. My entire adult life has been in Toronto, and my identity is Canadian. My grandmother was born in Canada, and then her family moved south. I’ve brought the family back. My family – two sons and their partners and three grandchildren—are here. This is my home. What could be better? —As told to Suzanne Bowness