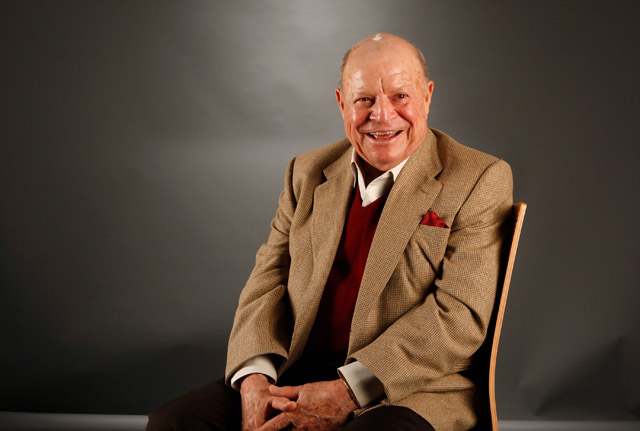 In honour of what would have been Don Rickles’ 91st birthday, we look back at some of the jokes that made him a comic legend.

Don Rickles was the best of the best—a comic whose laugh-out-loud barbs intimidated even other comics. His career bridged decades and generations of entertainers, from Johnny Carson to Jimmy Fallon, and earned him the nickname “Mr. Warmth” for the uncanny ability to crack a joke at someone else’s expense. He spared no one, though he always quipped with respect. The comic passed away at 90 on April 6, 2017.

“If I were to insult people and mean it, that wouldn’t be funny,” he once said of his style, rejecting the idea that he was an insult comic. “There is a difference between an actual insult and just having fun.” After all, it isn’t every day that someone could stand in front of a crowd, take a crack at Frank Sinatra and get away with it.

The laughs followed Mr. Warmth wherever he went, from his frequent visits to see good friend Johnny Carson on The Tonight Show to Dean Martin’s Celebrity Roasts to his countless stand-up gigs and his famous story about using Frank Sinatra to impress a date (it’s the final entry on our list), so we collected 15 of our favourite jokes here. After all, what better way to pay tribute to the late, great Don Rickles than to share a laugh with him one more time?

1. “Show business is my life. When I was a kid I sold insurance, but nobody laughed.”

2. “The transformation has been unbelievable. When I started here, I worked in a place where the ‘Sky Room’ was on the second floor.” — Rickles on Las Vegas

3. “When you enter a room, you have to kiss his ring. I don’t mind, but he has it in his back pocket.” — Rickles on Frank Sinatra

4. “Bob Newhart made the claim that I am his closest friend. I have never met Bob Newhart.”

5. “Orson Welles, ladies and gentlemen, has been a great star for so many years. This man was married to a great many women in his life. They’re all flat now.”

7. “What’s Bob Hope doing here? Is the war over?” — Rickles on The Dean Martin Show

8. “I must tell you, Mr. President, it’s a big treat coming out here all the way from California for this kind of money.” — Rickles to U.S. President Ronald Reagan at his second inauguration

9. “Pat Boone, one of our great stars, right? Has a daytime show. He’s marvellous, the way he comes out—’Hi, I’m Pat Boone!’ What do you want, a cookie? You’re making a fool of yourself and going nowhere, pal. And I’m a friend.”

10. “It’s so good to see you. I didn’t know you were still on.” — Rickles to Johnny Carson after being introduced on The Tonight Show

12. Don Rickles: “And why do we laugh?”
Dean Martin : “Because we must laugh!”
Don Rickles: “That’s right. Look who became the priest.”

13. “Marty (Scorsese) when we see all the films you did, none of them were great.”

15. Don tells Vanity Fair the famous story of how he blew Frank Sinatra off at dinner in New York:

“It’s a true story, so help me God,” he began obligingly. “Sinatra was headlining at the Sands, and I was with this girl having dinner in the lounge. She wasn’t anybody I would bring home to my mother, but I really wanted to score big. Frank was in the lounge at his table with Lena Horne and some other celebrities and all his security guards. And my date says, ‘My God, there’s Frank Sinatra! Do you know him?’

“I said, ‘Sure, he’s a friend of mine.’ Which he was. But I made it sound like my whole life. ‘We’re like brothers!’ She didn’t believe me. So I said, ‘Wait here, sweetheart,’ and I went over to Frank’s table. ‘What do you want, Bullethead?’ he said. That was his nickname for me. I told him I was trying to impress this girl and would he do me a very big favor and come over and just say hello. He said, ‘For you, Bullethead, I’ll do it.'”

“Five minutes later, Sinatra strolled over and said, ‘Don, how the hell are you?’

“And Don Rickles looked up and replied, ‘Not now, Frank. Can’t you see I’m with somebody?'”