2017 Emmy Nominations: Boomers By the Numbers 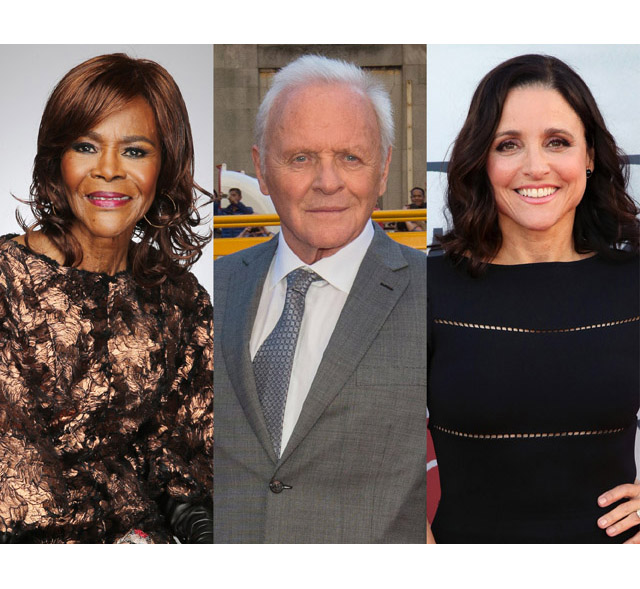 The 2017 Emmy nominations were revealed this week, with a slew of boomers landing nods, including both Susan Sarandon (70) and Jessica Lange (52) vying for Best Actress in a Limited Series or TV Movie for their titular roles in Feud: Bette and Joan; Jane Fonda (79) finally joining co-star Lily Tomlin (77) with a nod as Best Actress in a Comedy Series for Grace and Frankie; Anthony Hopkins (79) scoring for Best Actor in a Drama Series for Westworld; Kevin Spacey (57) and Robin Wright (51), who each again snagged Best Actor and Actress in a Drama Series nominations for their scheming spousal roles on House of Cards; and Robert De Niro (73), whose first Emmy nomination ever is for Best Actor in a Limited Series or TV Movie for HBO’s The Wizard of Lies, in which he plays Bernie Madoff alongside another first time Emmy nominee, Michelle Pfeiffer (59) whose role as his wife Ruth landed her a spot in the Best Supporting Actress in a Limited Series or TV Movie category. And, of course, the Ontario-filmed The Handmaid’s Tale, based on the book by CanLit legend Margaret Atwood, scored 13 nominations, including for Best Drama Series.

But what about delving beyond the nominations to see what they mean for the 45-plus set of stars in the running? For example, the record for oldest Emmy nominee ever was shattered, with the title of oldest winner within reach. Read on to learn what other milestones were met and who could make history at this year’s ceremony as we put the 2017 Emmy nominations into a boomer perspective.

This Year’s Emmys Include the Oldest Nominee Ever

At 92, Cicely Tyson, nominated for Outstanding Guest Actress in a Drama Series for her turn on How to Get Away With Murder, is now the oldest Emmy nominee in history, beating out Betty White, who was nominated in 2012 at age 90. If Tyson wins, she’ll top White’s record for oldest winner ever, which is 88 years old.

Julia Louis-Dreyfus’ starring turn on the hit political comedy Veep has proven a hit with both viewers and Emmy voters. Dreyfus is already tied for most Emmy wins for playing the same role on the same series with five statuettes, alongside Candice Bergen (Murphy Brown) and Don Knotts (The Andy Griffith Show). If she wins this year for Best Actress in a Comedy Series, she’ll be the sole record-holder. A win would also tie her with Cloris Leachman for most overall Emmys won by a female performer, with eight. She’s currently tied at seven wins Mary Tyler Moore and Allison Janney. Of course, with Janney, 57, also in the running this year for Best Actress in a Comedy Series for Mom, she could play spoiler and move up to join Leachman herself.

Saturday Night Live also tied with Westworld for the most overall nominations for a single show this year, with 22.

A number of boomer actors and actresses landed their first ever Emmy nominations this year, including some major Hollywood heavyweights. This year’s “Boomer First-Timer” club includes:

* Robert De Niro, 73, Best Actor in a Limited Series or TV Movie, The Wizard of Lies

The Oldest Category (By Combined Age)

The oldest category by combined age is the category with the highest number when the ages of all the nominees are added up. This year, the winner is technically the Host for a Reality/Reality-Competition Program category, which comes in at a combined 436-years-old. The category includes:

However, because two of the shows in the category have multiple hosts, it means the category enjoys the advantage of having two extra nominees to add to their totals. As such, the Best Supporting Actor in a Drama Series, with a combined 407 years between the nominees, seems the rightful claimant to the crown. The nominees in that category are: