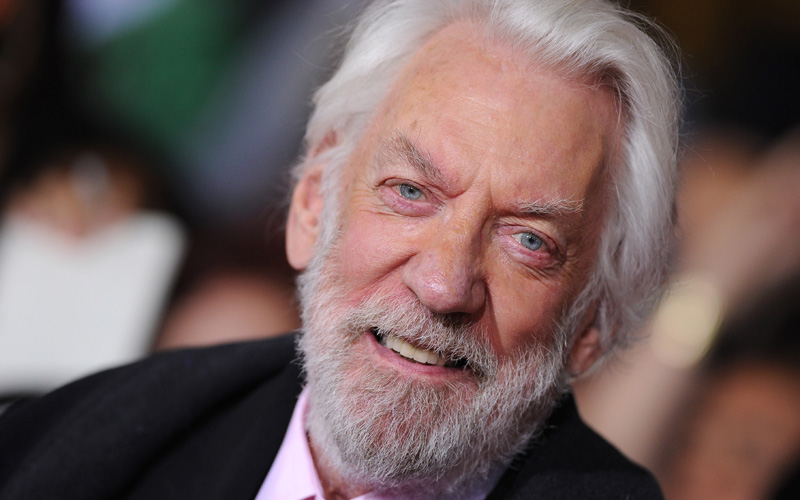 I flew to L.A. to interview Donald Sutherland in early August. The morning of the interview began when news broke of the suicide of Robin Williams. Needless to say, everywhere one went in Hollywood that day, the death of the beloved star was on everyone’s minds.  But when I entered the Beverly Hills Montage Hotel where I was to meet our November cover subject, an entire floor was given over to The Hunger Games: Mocking Jay Part One. The hallways and various banquet rooms were decked out with movie posters and banners for the film, as various stylists (carrying twice their weight in garment bags) fluttered about, no doubt prepping the young starlets for their close-ups. As I waited for Donald, I kept peering around corners for a glimpse of Jennifer Lawrence or Liam Hemsworth but, alas, they had been secreted off to parts unknown.

Eventually, a publicist leads me to an enormous ballroom–the size that could hold a decent wedding reception–and there I waited.

This is when I got nervous. I’ve interviewed dozens of movie stars, rock stars, authors and politicians. But Donald Sutherland is an icon and has worked with such cinematic luminaries as Frederico Fellini. I felt my palms get sweaty and was wiping them with a tissue when in walked Donald, wearing a suit that looked custom-measured, and a smile that seemed meant to disarm. It worked. We chatted for our alloted 20 minutes–he was as enthusiastic, bright-eyed and energetic as any actor a quarter of his 79 years–then seemed disappointed when his publicist called time.

It was at that moment we stood up and shook hands. Only that wasn’t all. Or at least, I thought that wasn’t all. You see, he leaned towards me and I instinctively leaned forward too, assuming he was going to plant a kiss on my cheek. So I kissed his cheek…except that wasn’t what he was doing. He was merely asking me a question. You’ll have to read the article to find out what happened next.