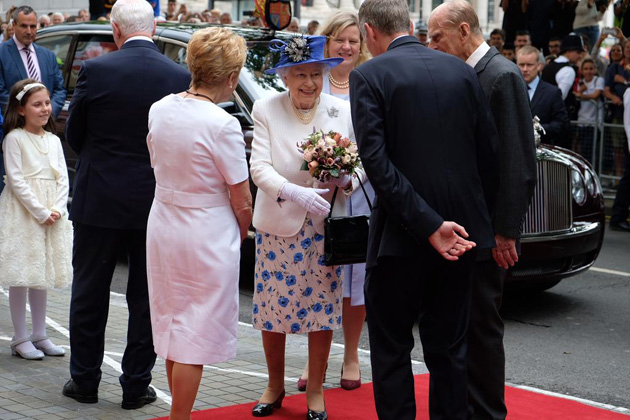 Queen Elizabeth, the Duke of Edinburgh and Canada’s Governor General David Johnston and his wife, Sharon, were greeted by a sea of people enthusiastically waving Canadian and British flags on Wednesday morning as they prepared to unveil a plaque outside Canada House in London. The new bronze marker was set up in recognition of Canada 150.

However, the Governor General caused a bit of a stir in the British media when he momentarily broke from royal protocol and held the Queen’s arm as they walked down the stairs of Canada House.

Etiquette suggests that visitors not touch a member of the royal family—with the exception of a returned handshake. According to CTV’s Daniele Hamamdjian, Johnston later told reporters that he was aware he was breaking protocol but was concerned for her safety when descending the stairs. No harm, no foul.

After the ceremony, Johnston shared some of his favourite photos from the event with his Twitter followers: Earlier this week, the Governor General and his wife had a private meeting at Buckingham Palace for the final time with the Queen before Johnston’s term concludes this fall.

“As Sharon and I get ready to visit London for the last time during my mandate as governor general, we reflect upon the past seven years and my time as Her Majesty The Queen’s representative,” Johnston said in a statement ahead of the visit. “It has been a tremendous privilege to act on our Sovereign’s behalf and to serve my country.”