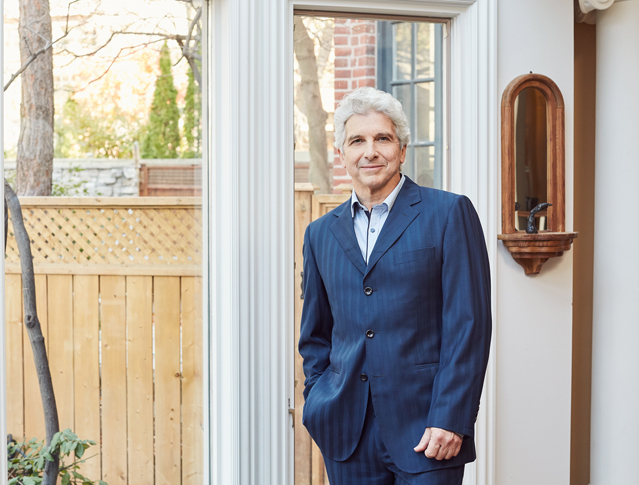 In late June, 2018, as the Toronto Symphony Orchestra’s 2017/2018 season wraps, Beethoven’s 9th will serve as the lead in to Oundjian’s 3rd. The latter, of course, is not a symphony but the farthest thing from it – which is kind of the point – the third act for Toronto-born conductor Peter Oundjian, who enjoyed a career as a star violinist before a repetitive stress injury in his hand forced a transition to the TSO’s conductor and music director.

Now, as the 61-year-old prepares to relinquish the reigns at the TSO following the 2017-2018 season after 14 years, we wanted to find out what the maestro has up his sleeve for act three…

MIKE CRISOLAGO: What is your mindset going into this final season?

PETER OUNDJIAN: It’s like the orchestra has developed, in various ways, so much over the last dozen years, and now it’s just my final opportunity to let them express themselves, as we have learned to do together, and hope that people take something from that. The repertoire is all designed for that, and a lot of guests, artists, who are very good friends of mine, all emerging artists. It was an opportunity really, and the TSO was very kind to me to say, “Look, create something which is a real celebration.” And so that’s what we have done.

MC: What was it about the timing that you decided to pass the baton after 14 years helming the TSO?

PO: You know, it’s always good to have people ask you the question that you just asked me, rather than, “Why did you wait so long?” [Laughter] I’ll never forget, (Harry Ellis Dickson) was a member of the Boston Symphony for 49 years. And he was a conductor as well. When I played with the Boston Pops years ago he conducted me and I said to him, “Why did you leave after 49 years?” He said, “Because I’d rather have that question than, ‘why did you stay so long?'”

Essentially, I felt like I had hired pretty much half the orchestra at this point, and we have done some lovely touring, some lovely recording, and I just felt like it was a good time to, on all sides, go in a new direction. They were very kind all along in conversations, like whenever you decide to leave you become emeritus, so I don’t completely lose my contact or my relationship with the organization. I mean it’s incidental, but it happens to be true that I also played in the Tokyo String Quartet for 14 years, and it’s also incidental that (the abbreviations) TSQ and TSO are relatively close. [Laughter]

MC: Fourteen is a bit of a magic number for you?

MC: What are some of your favourite memories of your time at the TSO?

PO: If you gave me that question and asked me to write them down for a week I could probably come up with dozens and dozens of them, so I’d hate to mention anything because it might leave certain things out. But the one thing I would say, in general, is that it’s beyond a collegial kind of relationship, because everything we do touches the human spirit, or is intended to at least. In the end we are dealing with the privilege of being able to bring a message of peace and beauty to society and so, because of that environment, you have extraordinary close and intimate relationships and conversations with many, many people. It’s a different environment from one in which one is, say, purely doing business.

MC: How has your outlook on music evolved over your time with the TSO?

PO: On one side I think you become more sure of what your responsibility is and what your message is, but on the other side you also become more open to different possibilities so that when you have been fortunate enough to be on stage many thousands of times you kind of know that anything can happen and that the last thing you want to do is to work too hard to control it. I think you become a little bit better at giving up control and relying a little bit more on spontaneous energy, interaction, and keeping things as fresh as possible. It’s something I learned in the Tokyo Quartet that some people think you’re playing that piece again but you never feel like you’re playing the piece again. It feels like the first time. But I always wonder at actors who can come out and give an incredible performance of something like King Lear five or six times a week. It’s like, “My God, where do you get that spontaneity from?” It’s an attitude thing. So that I think is what I have learnt.

MC: Do you have certain a post-TSO plan or are you going to just play it by ear?

PO: I intentionally didn’t want to jump out of one huge responsibility into another. In fact, I am also giving up the Royal Scottish National Orchestra music directorship the same month because I wanted to bring closure to those things at the same time and open myself up to new possibilities.

I’m going to be guest conducting a lot of really interesting and lovely places, and I’m going to continue my work [teaching violin] at Yale because it’s something I am very passionate about. I never forget (Leonard) Bernstein talking about that. As he got older it gave him more and more satisfaction, or whatever you might call it – excitement even – to pass on everything he knew. We still offer whatever we have to offer and it’s very exciting to bring people in their late teens and early 20s to a point of playing a Bruckner symphony, or whatever it happens to be, with a certain depth and discovery.

MC: You’re only in your early 60s and you’re embarking on your third act, so to speak. How does it feel, at this point in your life, to face new career and creative challenges?

PO: It’s actually really exciting. Going back to that, I think a lot of people do stay too long and do start to deteriorate … It probably is a lot easier for me because of what I had to go through in my late 30s, I think, when I couldn’t play anymore. I had to learn a whole new trade. Even though I had a little bit of experience as a conductor I wasn’t really a conductor yet, frankly. So this is so much less daunting than that. I’m not losing sleep, I don’t want anyone to worry about me. [Laughter] I am excited about the options and I am excited at the fact that I don’t really know exactly what I’ll be doing in three, four or five years; I find that actually stimulating.

MC: Beyond music what plans or goals do you have going forward in your life?

PO: On a personal level I have always been interested in education, whether it’s trying to pass on information to others or to receive it myself and I have not had much time to learn things, to read or to maybe polish languages that I already know and maybe even learn a new language. And possibly to have a little bit more time to make a difference on a more community level in some areas of my life would be very satisfying. I’d like to have a nice balance of doing interesting things professionally and yet moving a little bit more in that direction of making a difference in the community.

MC: Lastly, it’s inevitable that everybody is going to talk about legacy when you step away. Do you ever consider your own legacy at the TSO?

PO: The only thing is just the reality, which is that I dedicated a significant chunk of my life to nurturing an organization that I believe in a hundred percent, to try to keep morale as high as possible on every side, players, management, patrons. So I always tried to just keep myself very calm and considerate of all the options when problems emerged and yet to be very clear about what my expectations were. I don’t think I am thought of as a dictator – at least I hope not [Laughter] – but I do hope that people had a clear idea of standards and expectations. We all like to know that a lot is expected of us but also that it’s appreciated. And I think that’s another thing, that I’d like that to be a part of my legacy – that I really appreciated the work that everybody has done and continues to do for the organization.

For more on the Toronto Symphony Orchestra’s 2017/2018 season, visit www.tso.ca.