“You Are All Winners”: Prince Harry Opens Invictus Games 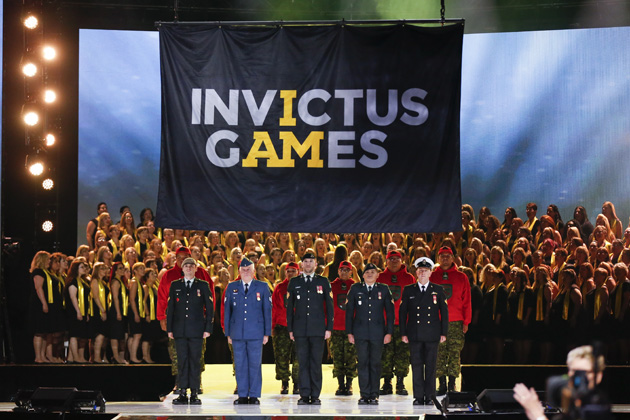 The opening ceremony of the 2017 Invictus Games featured hundreds of men and women from the Canadian Armed Forces, world dignitaries and show-stopping musical numbers.

The 2017 Invictus Games kicked off with a bang at Toronto’s Air Canada Centre this weekend.

The star-studded two-hour opening ceremony welcomed 550 competitors and their families from 17 competing nations. This year, Canada’s team boasts 90 members, the largest its ever had, says Michael Burns, chief executive officer of the Invictus Games Toronto. “I think it [is] important to all Canadians to really use this as an opportunity to show our gratitude, our support for our military families in a way that we’ve never been able to do before on this size and scale,” Burns said ahead of the ceremony.

With rousing performances by Sarah McLachlan, The Tenors, Alessia Cara, Laura Wright and La Bottine Souriante, the Invictus Games kicked off with a big splash.

Mike Myers, the 54-year-old actor-author-director, was the Official Ambassador to this year’s Invictus Games and delivered a stirring tribute to Canada.

It was a fitting choice given the Scarborough, Ont. native’s military connections—his parents, Alice and Eric Myers, served in the Royal Air Force and British Army, respectively.

“I am thrilled to be able to participate in an active role at the Invictus Games, taking place in the city where I grew up,” Myers said in advance of the opening ceremony. “The military background of my parents, who both served in Britain, makes this a cause that is near and dear to my heart. I am so honoured to be part of a Games where the focus is on supporting active service members and veterans who have given so much to their countries.”

Prince Harry launched the inaugural Invictus Games in London in 2014. Inspired by the U.S.-based Warrior Games, the prince drew from his own experiences as an officer in the British forces. His role as helicopter pilot in Afghanistan, which included airlifting injured soldiers to hospital, gave the young royal a newfound sense of purpose. “I convinced myself for 10 years that, while I was there, I was one of the lads,” he told the British press. “I was doing a job and I had a role. How, I thought, do you ease their [the soldiers’] trauma and give new meaning to their shattered lives? Then it hit me—sport.”

As he wrote in an exclusive to the Toronto Star: “Time and time again, competitors from around the world tell me that sport has saved them; that the Invictus Games have given them a new lease on life; and that to represent their country again with fellow comrades is something they could only have dreamt of while lying in hospital.”

This year, during the eight-day Games, Prince Harry will visit various training sessions around Toronto and watch competitors participate in all 12 sports, including cycling, archery and wheelchair basketball.

His busy schedule also includes talks with Prime Minister Justin Trudeau and a visit to a mental health and addiction teaching hospital. The royal will also hand out Duke of Edinburgh International Gold Awards to young Canadians and host a reception for the Invictus Games Foundation. The prince will be in Toronto from September 22 to September 30.

The opening ceremony wasn’t without controversy, however. The scheduled appearance of first lady Melania Trump drew heat in the weeks and days leading up to the Games. Trump led the United States delegation into the Air Canada Centre and was later seated next to the prince to watch the show.

“I was heartened by the great success of the inaugural Invictus Games that took place in London in 2015, and the second games in Orlando, Florida last year,” the first lady wrote in a press release. “In just two short years, the Invictus Games have allowed thousands of injured and wounded servicemen and women from many different countries to participate in adaptive sports competitions—something that should be lauded and supported worldwide.”

The closing ceremony will take place on Saturday, September 30 and will feature performances by Bryan Adams, Bruce Springsteen, Bachman & Turner and Kelly Clarkson.