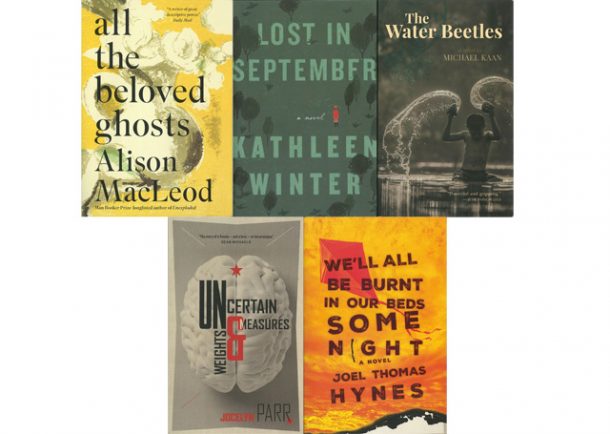 Tis the season for book lovers to celebrate their favourite reads from the past year, with the shortlists for both the Scotiabank Giller Prize and the Rogers Writers’ Trust Fiction Prize announced within the last week. Today, the finalists for the third in the book honour trifecta – the Governor General’s Literary Awards – were revealed by the Canada Council for the Arts, with authors in English and French categories ranging from fiction to poetry, drama, non-fiction, young people’s literature and translations. Celebrating its 81st year, the GG Literary Award shortlists were narrowed down from more than 1,400 submitted titles via peer assessment.

All the Beloved Ghosts, by Alison MacLeod, a collection of short stories that transcend time and history in tales incorporating famous figures and life-altering stakes set everywhere from Nova Scotia to London, England.

Lost in September, by Kathleen Winter, a reimagining of Quebec hero and Plains of Abraham casualty General James Wolfe as a soldier suffering from PTSD in the modern-day belle province by the Giller-nominated author of Annabel.

The Water Beetles, by Michael Kaan, a story of the 1941 Japanese invasion of Hong Kong inspired by the author’s own family, where one boy separates from his family to hide in the countryside, endures persecution and eventually leaves his old life behind.

Uncertain Weights and Measures, by Jocelyn Parr, a portrait of 1920’s post-Revolution Russia through the eyes and actions of two young lovers – one an artist and one a scientist – and the circumstances that cause upheaval in their own personal lives.

We’ll All Be Burnt in Our Beds Some Night, by Joel Thomas Hynes, a cross-Canada road-trip tale that follows a man who skirted prison lockup hitchhiking across the country in an attempt to deliver his dead girlfriend’s ashes to the west coast.

Other English language award nominees include:

All the Names Between, by Julia McCarthy

On Not Losing My Father’s Ashes in the Flood, by Richard Harrison

What the Soul Doesn’t Want, by Lorna Crozier

The Colony of Unrequited Dreams, by Robert Chafe

The Virgin Trial, by Kate Hennig

Within the Glass, by Anna Chatterton

All We Leave Behind: A Reporter’s Journey into the Lives of Others, by Carol Off

The Handover: How Bigwigs and Bureaucrats Transferred Canada’s Best Publisher and the Best Part of our Literary Heritage to a Foreign Multinational, by Elaine Dewar

The Way of the Strangers: Encounters with the Islamic State, by Graeme Wood

Where I Live Now: A Journey through Love and Loss to Healing and Hope, by Sharon Butala

Where It Hurts, by Sarah de Leeuw

The Governor General’s Literary Award winners will be announced Wednesday, Nov. 1, 2017, with a ceremony and honours presented by Her Excellency the Right Honourable Julie Payette, Governor General of Canada, on Nov. 29, 2017.