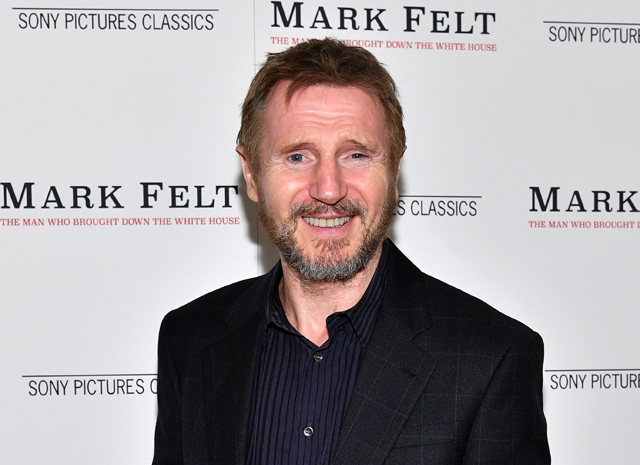 The 65-year-old Oscar-winner sits down to discuss his new film, Mark Felt: The Man Who Brought Down the White House, and admits that “I thought of four different actors who could have been better cast as Mark Felt. I always do that anyway [on] every project.”

“This is an actor’s worst nightmare,” Liam Neeson quips as he enters the small hotel conference room choked with reporters, all with gazes set on his roughly 6’3″ frame. He’s joking … probably … though the non-stop hustle of the Toronto International Film Festival, where this encounter took place this past September, seems the sort of venue the laid back, soft-spoken 65-year-old Northern Irish Oscar-winner would prefer to avoid. He settles into a chair to my left and, in profile, with his prominent nose, greying beard trimmed tight to his jaw line and thoughtful furrowing of his brow as he answers questions, I note the resemblance to Abraham Lincoln – you know, if ol’ Honest Abe wore a sports coat and blue jeans.

Though he and Lincoln were also about the same height, Neeson actually turned down the title role in Steven Spielberg’s 2012 Lincoln, which netted Daniel Day-Lewis his record third Best Actor Oscar. For his part Neeson has no regrets and, in fact, as we soon learned, has his sights on another opportunity to portray the 16th President of the United States.

But more on that in a bit. Neeson’s here to discuss a different presidential-themed part, that of Mark Felt, the FBI stalwart turned Watergate informant better known as “Deep Throat,” who he portrays in the new biopic Mark Felt: The Man Who Brought Down the White House. The true tale of an American president attempting to derail an investigation into his misdeeds by firing his FBI director is nothing if not topical in today’s current U.S. political climate, where rumours of Russian collusion and obstruction of justice swirl almost as frequently as unhinged presidential tweetstorms. Neeson spoke of that and much more in our time together.

How did you get involved with the film and what was your initial reaction to the script?

LIAM NEESON: [Director/writer] Peter Landesman approached me … and we talked about this Watergate thing and I was reasonably ignorant of all of it. I grew up in Ireland and we were going through our own troubles then. And then I thought of four different actors who could have been better cast as Mark Felt. I always do that anyway [on] every project and I think Peter saw a nobility in the character and I thought, “Well yeah, I could do that.”

You’ve noted before that Mark Felt, the man, seemed “unreadable” to you. What’s it like, as an actor, to play someone like that?

LN: Well, I’m Irish, I like to emote. I knew there was this scene where he finds (his) daughter. I thought, “Right, I can unzip myself there a bit, and the audience needs to see that emotion. And hopefully from the start of the film we can keep the curtain down and tread a very thin line of hoping the audience aren’t going, ‘When’s this f*cker going to show some emotion?'” It’s basically guys walking down corridors and sitting behind desks, that’s the bulk of the film. So I had to trust Peter and his editor and … terrific actors.

Could one man bring down the White House today?

LN: We know there was collusion with this administration and Russia, we know there is. Whether the Twittering Chief was part of that or not, [head of the Russia investigation Special Counsel Robert] Mueller will find out … So we’re all going to see, something will be uncovered in the next year or so. But I certainly felt for [fired FBI director] James Comey who was this stalwart, the G-man’s G-man, being dismissed because, we’re told, he wouldn’t give his loyalty and apparently the Twittering Chief demands absolute loyalty. And that was very much the same with Richard Nixon – if you weren’t on his side you were his enemy. Mr. Trump sees the press as the enemy and Richard Nixon did too. It’s very scary.

Have you ever met Donald Trump?

LN: I have actually. [In 2013] I was supporting the horse and carriage industry in Central Park because they wanted to close it down after 150 years and I became a spokesperson for them and got behind them and I thought, “I’ll call up Donald Trump. It’s right outside his hotel.” And he came on the phone and we had a good chat and I told him what I was doing, and now when I play it back in my mind he was being very cagey. You know he said, “Well I like looking out my window and I like seeing the horses and carriages there,” and then he said, “I’m actually going in to see [Mayor] Bill de Blasio, in the next three days” … I hoped he was going to say, “I’ll bring it up with the mayor.” He didn’t say that and I thought, “Okay, nice talking to you Mr. Trump, thanks for coming to the phone.” But when we defeated this thing, he sent me – there was a thing in the New York Daily News that we had won this fight and Mr. Trump had written on it, “Congratulations, well done.” So that’s fair enough.

You said earlier that, when it comes to roles you’ve played, you often think of other actors who might be better for that part. Are there certain types of roles that you’re looking to play at this point in your career?

LN: Not really, other than I get off on good writing. It always has to come down to the written word. I’ve had a chance to binge watch some of these amazing shows, and writing is fantastic on TV now.

Would you consider doing a series?

LN: [Mock sneers] “Television, darling?” That’s how the old Hollywood stars used to go. Joan Crawford was, “You’re doing television?” I would of course. There’s a wonderful writer called Douglas McGrath who’s written a pilot to … the story of Abraham Lincoln and his years in the White House that I’m very tempted by. As much as I adored Steven [Spielberg’s] film and Daniel [Day-Lewis’] performance it just told one little snippet of them trying to pass the 13th Amendment and I thought America doesn’t know the Abraham Lincoln story, of what that guy went through and the whole Civil War and 625,000 Americans died in that war and he carried it on the shoulders. He and his cabinet, but he especially to defend the idea of democracy and that it can work and the United States of America. We don’t know that story. Kids nowadays haven’t a clue about that story. So I’m tempted by that. And the timing would be right for it.

If you had to choose one of the films from your amazing career to put into a time capsule, what would it be?

Mark Felt: The Man Who Brought Down the White House is in theatres Oct. 13.