Courage: The Life And Legacy Of Gord Downie 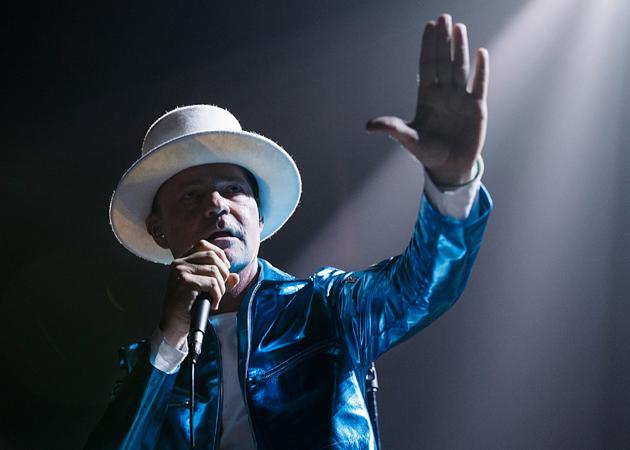 In honour of the musician-activist, who passed away on October 17, we look back at some of his most inspiring career highlights.

Courageous, he was. There’s no better word to describe one of Canada’s national treasures—a man who delighted fans for decades with his quirky stage presence, thoughtful lyrics and used his celebrity status to support the nations Indigenous peoples.

Gordon Edgar Downie was one of Canada’s most riveting entertainers—a man who brought an inexhaustible passion and energy to every performance. Anyone who witnessed Downie in concert or watched the CBC’s broadcast of the Tragically Hip’s final show on Aug. 20, 2016—a mere six months after he was diagnosed with terminal brain cancer—could attest to his seemingly indestructible spirit, even when confronted with a debilitating disease.

When he wasn’t on stage in front of thousands of fans, he focused his attention to environmental issues, specifically those endorsed by Lake Ontario Waterkeeper, a Canadian water charity run by his former Queen’s University classmate, Mark Mattson.

But it was in 2016, when he revealed his Secret Path project to address the controversial legacy of residential schools, that Downie put his celebrity to its most celebrated use. Following the Hip’s farewell tour, which concluded in his hometown of Kingston, Ont., Downie zeroed in on the “glaring stain” in Canada’s history. In the span of less than a month, he brought the tragic tale of Chanie Wenjack—a 12-year-old boy from Kenora, Ont. who froze to death running away from residential school in 1966—back into the nation’s collective consciousness. “Let’s not celebrate the last 150 years,” he said. “Let’s celebrate our next 150 years.” And, during the final months of his life, Downie made the stories of hardships endured by Indigenous peoples his primary focus; using the same vigor he once brought to the stage to a cause close to his heart.

The beloved musician was diagnosed with primary glioblastoma, an aggressive form of terminal form of brain cancer, in December 2015. He endured months of craniotomies, chemotherapy and radiation therapy. The Tragically Hip’s management broke the news after the May long weekend in 2016.

Downie died, surrounded by family, on the evening of Oct. 17 at the age of 53. He is survived by his wife of 23 years, Laura Usher, and four children. The family released a statement to the media: “Gord knew this day was coming—his response was to spend this precious time as he always had—making music, making memories and expressing deep gratitude to his family and friends for a life well lived, often sealing it with a kiss…on the lips.”

Here, we look back at some of the career highlights of the late, great Gord Downie. “No dress rehearsal, this is our life: Gord Downie and The Tragically Hip played their final gig, in their hometown, in the arena that the band inaugurated, on the street that bears the band’s name K-Rock Centre in Kingston on Aug. 20—broadcast live on the CBC to an estimated 11.7 million viewers, with 20,000 people from across the continent assembled in Kingston’s Springer Market Square to celebrate…The Tragically Hip’s musical oeuvre occupies a huge chunk of the soundtrack of Canadiana. Whatever happens from here, Downie can rest assured that his legacy, his poetry and his band’s music will live on long after the last guitar reverberates into the Kingston sky. And that’s something for all of us to sing about…” The Order of Canada

“The Tragically Hip singer was named a member of the Order of Canada by [former] Governor General David Johnston (pictured above) on June 19 at Rideau Hall in Ottawa, along with indigenous activist Sylvia Maracle who was named an officer of the Order for her advocacy for urban indigenous peoples and women’s issues…Prime Minister Justin Trudeau and wife, Sophie Gregoire-Trudeau, were on hand to help pay tribute to the recipients…” A Canadian music charts mainstay, Downie found almost equal success on his solo ventures as he did with his bandmates in the Tragically Hip. Fan favourite Coke Machine Glow and his recent Juno-winning Secret Path, in particular, are testaments to his formidable talents as a songwriter. “With prime minister Justin Trudeau looking on, Gord Downie was warmly embraced by the Assembly of First Nations (AFN) National Chief Perry Bellegarde (pictured above) and honoured for his work in highlighting the lives of victims of Canada’s residential schools. Downie’s book, Secret Path, tells the story of 12-year-old Chanie Wenjack, a First Nations boy who died in 1966 after trying to escape a Kenora, Ont. residential school…In recognition of his advocacy, a visibly emotional Downie was gifted with an eagle feather [on Dec. 6, 2016] and given an indigenous spirit name, which translates to ‘Man who walks among the stars…'”

“This is my soul on a record,” Gord Downie says in a 54-second teaser trailer for Introduce Yerself, his forthcoming double album. The video announced the Oct. 27 album release date, noting that the Tragically Hip frontman, 53, wrote all 23 original tunes on the disc between the period of January 2016 and February 2017.