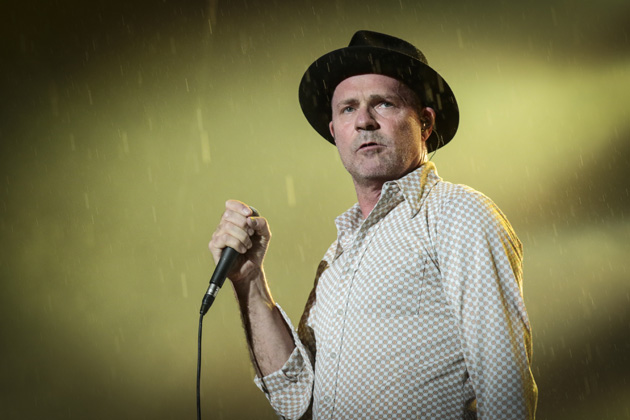 “This is my soul on a record,” Gord Downie says softly on the 54-second teaser trailer for his latest solo project, Introduce Yerself, which hits stores today. In the end, the album proved to be his last. Downie, who died of brain cancer on October 17 at age 53, wrote all 23 original tunes featured on his highly-anticipated solo double album.

Downie explained in the teaser trailer that “each song is about a person” while the album’s label, Arts & Crafts, said in a statement that many of the tracks were recorded in a single take. No surprise, considering Downie’s considerable talents and dedication to his craft.

The directors of the trailer video, Jennifer Baichwal and Nicholas de Pencier, are the duo behind the Tragically Hip documentary Long Time Running, about the band’s final 2016 “Man Machine Poem” tour, which airs across Canada on Nov. 12.

Since revealing his brain cancer diagnosis late last year, Downie embarked on an awe-inspiring creative streak, from the Tragically Hip’s wildly successful final tour to his award-winning Secret Path, which draws attention to the plight of Canadian Aboriginal communities.

During the final months of his life, Downie made the stories of hardships endured by Indigenous peoples his primary focus, using the same vigor he once brought to the stage to a cause close to his heart.

Throughout his career, both solo and with the Hip, Downie’s lyrics cast a spotlight on the hidden aspects of Canada’s history, from its social problems and legal injustices to its relatable stories of small-town Canadians going about their daily lives.

There’s no denying that Downie’s death has left a void in the Canadian music scene.

Here, we revisit a handful of our favourite songs—and the lyrics we love—from one of Canada’s poets.

“First thing we’d climb a tree. And maybe then we’d talk. Or sit silently. And listen to our thoughts. With illusions of someday, cast in a golden light. No dress rehearsal. This is our life.”

“Bill Barilko disappeared, that summer. He was on a fishing trip. The last goal he ever scored won the Leafs the Cup. They didn’t win another until 1962, the year he was discovered.”

“See my sister got raped, so a man got killed. Local boy went to prison, man’s buried on the hill. Folks went back to normal when they closed the case. But they still stare at their shoes when they pass our place.”

“If there’s a goal that everyone remembers,  It was back in old ’72. We all squeezed the stick and we all pulled the trigger,  And all I remember is sitting beside you. You said you didn’t give a f*ck about hockey , And I never saw someone say that before.  You held my hand and we walked home the long way , You were loosening my grip on Bobby Orr.”

“There’s no simple explanation. For anything important any of us do. And yeah the human tragedy, consists in the necessity, of living with the consequences, under pressure, under pressure.”

“One afternoon, four thousand men died in the water, here. And five hundred more were thrashing madly, as parasites might in your blood. Now I was in a lifeboat designed for ten and ten only. Anything that systematic would get you hated. It’s not a deal nor a test nor a love of something fated. The selection was quick, the crew was picked in order. And those left in the water, got kicked off our pant leg. And we headed for home.”

“Cause it was in Bobcaygeon, Where I saw the constellations, Reveal themselves, One star at a time.”

“In his Zippo lighter, he sees the killer’s face. Maybe it’s someone standing in a killer’s place. Twenty years for nothing, well that’s nothing new. Besides, no one’s interested in something you didn’t do.”