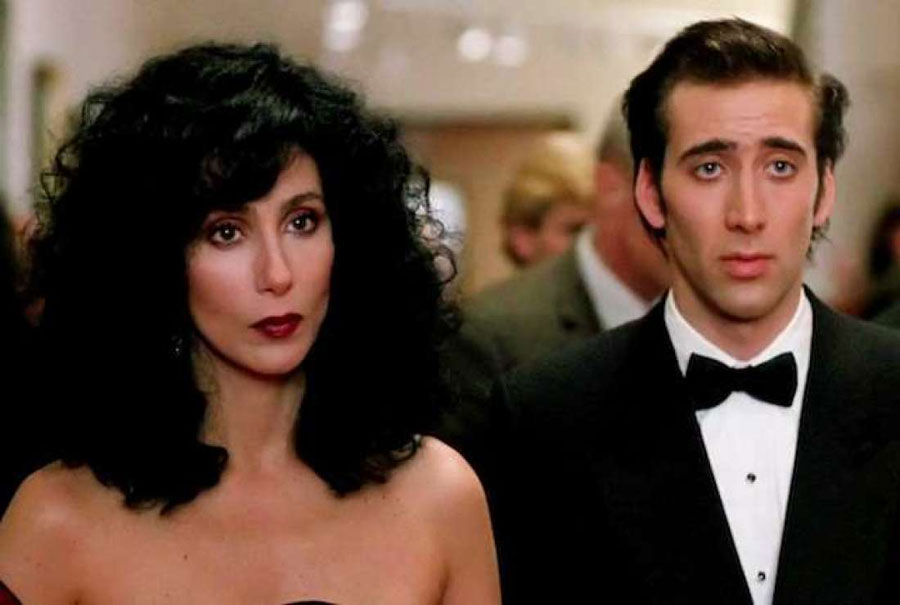 Three decades ago this past December, Moonstruck was released in theatres. Here, five reasons to revisit the Oscar-winning classic.

Like many a movie making the leap to cultural touchstone, it’s those four words that put 1987’s Moonstruck, which celebrates its 30 Anniversary this December, over the cinematic vault. Entering a very small club of films that are immediately recognizable by a single piece of dialogue—”I’ll have what she’s having” or, duh, “Toto, I have a feeling we’re not in Kansas anymore”—it reclines comfortably on the American Film Institute’s list of 100 Top Movie Quotes, joining those strings of verbiage from When Harry Met Sally… and The Wizard of Oz, respectively. It’s frozen in celluloid together with the likes, additionally, of “You can’t handle the truth!” (A Few Good Men) and heck, “E.T., phone home” (yup, you guessed it).

Three decades after its release, it also demands a full appraisal…no? Having recently revisited the Norman Jewison-directed, Brooklyn-set marvel, these were five of the things that stood out, and what continues to make it the last word in earthly rom-coms.

The transformation of Loretta (Cher’s character in Moonstruck) is also the transformation of Cher. Playing her sexy, funny, and understated—and with a swan-like transformation mid-way that remains one of the most satisfying parts of the movie—she cinches the diva-to-actress metamorphosis (something only a very few, like Liza, in Cabaret, have managed. We’ll see how Lady Gaga manages in the upcoming reboot of A Star is Born!)

Though not new to acting—she was nominated for an Oscar three years prior, for Silkwood—this project (for which Cher did ultimately nab the Oscar)— represented her ultimate conquest, it coming on the heels of both The Witches of Eastwick and Suspect that year. She was in demand, period—notable for the fact that she made it into a circle of bankable female stars at ago 40. Her character, in the film, also represented a gate crash, for here was the unabashed love story of a definite non-spring chicken and a decidedly younger man—Nicolas Cage was 27.

In the continuum of Hollywood, this is worth noting, given the fact that, only decades prior, stars like Gloria Swanson were regularly relegated to the part of has-been by their 50s (her character in Sunset Boulevard was famously only 50!), and it would be some time before Meryl Streep would be stringing together four consecutive box office hits topping $100 million (in her 60s!). Cher, for one—having copped to stealing from her ex Sonny Bono’s family in nailing down Moonstruck‘s family dynamics, “everybody eating and talking and shouting”—has also playfully shrugged off her abilities. “Look, I have a very narrow range,” she once told an interviewer, “I’ve never tried anything more than playing who I am. If you look at my characters, they’re all me.”

Arriving at a time when virtually every Italian-American character in pop culture had an association with the Mafia (and would continue to in years to come…exhibit A: The Sopranos), Moonstruck paved a refreshing departure. In a movie that its director once dubbed “an operatic multigenerational romantic comedy,” Loretta’s father is a plumber. And Ronny, Loretta’s love-interest played by Nicolas Cage? He’s a…baker. “Moonstruck,” as one critic decoded later, “serves up the cannoli without the crime.” One other remarkable thing: though it lies now in the cannon of Italian authenticity on film, neither its screenwriter, John Patrick Shanley (who won an Oscar too) had an ounce of Italian in him, nor did Norman Jewison.

3. Jack of all films

Looking at Moonstruck also provides an opportunity to reinforce the body of work, as a whole, of Jewison. Long before there was a David Cronenberg or a Jean-Marc Vallee behind the lens, there was the now-91-year gent, Canada’s most successful import to the Academy Awards, his films having tallied up a total 45 Oscars (including a Best Picture grab for 1967’s In The Heat of The Night, a movie that made Sidney Poitier a star, and was a milestone for a racially-stormy decade). The director further sealed the deal when he received Oscar’s prestigious Irving Thalberg Award in 1999, after having bossed around everyone from Steve McQueen to Denzel Washington to, yes, Cher, throughout his career. Much noted, at the time: just how much of an accomplished genre-hopper Jewison is, having filmed everything from the original Thomas Crowne Affair, a caper, to boxing biopic, The Hurricane, to musicals such as Fiddler on the Roof and Jesus Christ Superstar. About the last two films, Jewison once quipped to me, “I did one (Superstar) for the goyim, and one for the Jews.” Moonstruck, meanwhile—a movie he shot largely in Toronto—succeeds, as his most beloved and, in many ways, most timeless.

Stanley’s script is possibly the real star of the film. Straddling the whims and specifics of multiple characters—there are three love stories at work, arguably—it’s packed with poignancy, like in the scene when Loretta’s mom, played by Olympia Dukakis (amazing in the movie) gives the dead-on answer of why men cheat. “I think,” she says, “it’s because they’re afraid to die.”

Then, there’s Nicolas’ Cage, whose usual off-kilter-ness has rarely been put to use better. There’s the point in the film when he makes this monologue come alive, without making it runny: “Love don’t make things nice, it ruins everything, it breaks your heart, it makes things a mess. We’re not here to make things perfect. The stars are perfect. Not us. Not us! We are here to ruin ourselves and love the wrong people and die!”

Watching the movie again it’s striking, finally, how much a spell it casts—from a lunar sense. With the moon hanging over the tale—one reinforced by the use of the song, “That’s Amore!”—destiny really seems to be out of the characters’ control. Jewison, who owns a cattle spread outside Toronto, once explained it this way, honing the point that wasn’t just a poetic flourish: “They’re all affected by la luna—there’s a full moon hanging over Manhattan and Brooklyn. I’m a farmer, so I know the moon affects animals. And I think the moon affects humans to a greater extent than most of us recognize.”