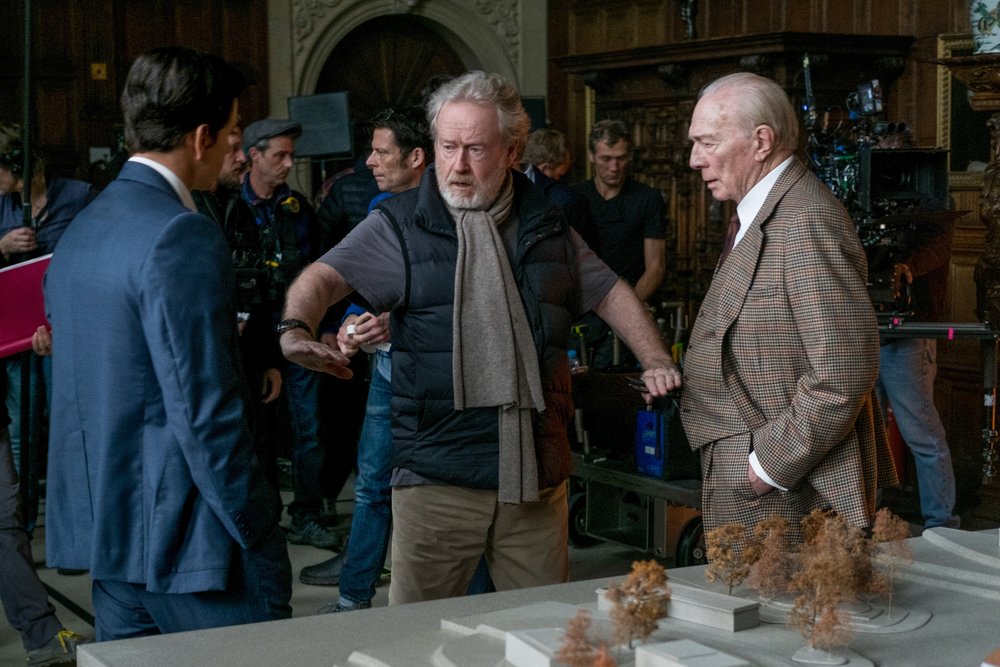 How Ridley Scott and Christoper Plummer performed a Spacey-ectomy

All the Money in the World chronicles a real-life sensational event from 44 years ago and was profoundly affected by a current one.

It follows the real-life 1973 kidnapping of 16-year-old John Paul Getty III (Charlie Plummer) and the desperate attempt by his devoted mother, Gail (Michelle Williams), to convince his billionaire grandfather (Christopher Plummer, no relation to Charlie) to pay the ransom.

When Getty Sr. refuses, Gail attempts to sway him as her son’s captors become increasingly volatile and brutal. With her son’s life in the balance, Gail and Getty’s adviser (Mark Wahlberg) become unlikely allies in a race against time.

Offscreen – two months before All the Money in the World was set to open in theaters – star Kevin Spacey was publicly accused of a history of sexual misconduct. Three days later, on Nov. 2, as allegations against Spacey multiplied, Sony’s movie chief was convinced by producers to replace Spacey with another actor  and re-shoot all 22 of his scenes.

Director Ridley Scott agreed to undertake the feat and convinced Christopher Plummer to replace Spacey in the J. Paul Getty role. The cast and crew – including Williams and Wahlberg – re-shot Spacey’s scenes for nine days over Thanksgiving in London and Rome.

The movie was edited in real time as the scenes were reshot, a monumental task that, incredibly, delayed the release by only three days.

Bonnie Laufer sat down with Scott and Plummer in Los Angeles to discuss the unprecedented move.

Bonnie Laufer: Congratulations to you both. This is an extraordinary film and what you have accomplished is unprecedented.  Ridley, let’s start with you, because without you we wouldn’t be sitting here today.  You finished the movie, you were in a studio in London putting final music touches on it, and you get that call about possibly re-shooting all of the scenes that featured Kevin Spacey as J.Paul Getty. What was your initial reaction to that and please keep it G-rated.

Ridley Scott:  I said the initial, “Fuck that!” … and then kicked the wall. Then I thought, “What?”

I don’t look for these things to happen. I was completely unaware of it (Spacey’s extracurricular behaviour). So, when it happened, it was seriously annoying. I never got a call from him and, by the way, I still haven’t gotten a call.

And I said, “You know what? I’m going to do something about this.”  I called up my partner Dan Friedkin, who said, “We can re-cast in a heartbeat, and I know just who.” And that is when I called and met Mr. Plummer here. And the first thing he said to me was, “Why didn’t you just cast me in the first place?”

So, we met, and the rest is history, and let me remind you that was four weeks ago, and now he’s got a Golden Globe nomination.”

BL: Not surprising to me. I’ve seen this man on the stage and he is truly incredible. How on earth did you pull this off, Mr. Plummer?

Christopher Plummer: Well, it was just that. You’ve seen me on stage, and I was able to use my theatre experiences of learning quickly vast chunks of Shakespeare and Elizabethan writers. So this was a cakewalk compared to that, even with the short amount of time I had to prepare. That helped me enormously. Thank God, my memory was still there. Also I have to admit, there was the excitement of the project. I did think it was a terrific role and the challenge it gave me was way too enticing.

BL: How do you get into the psyche of a man like J. Paul Getty. Here’s a guy who did have all the money in the world. But even if he had had 50 dollars in his bank account, wouldn’t you want to save your grandson? I find this to be such an interesting story.

SCOTT: I think you are taking this at face value. Getty, even being that wealthy was, first and foremost, a politician at every goddamn level. Double talk, whatever you want to call it he was still a politician.

So when he is being asked by the press to say how much would you pay, he said, “Nothing!” because he’s talking to the fundamentalists. He’s talking to the guys who have kidnapped his grandson. No one is going to extort anything from him, and he’ll be damned if he is going to be “taken” by anyone even if it means the life of his flesh and blood.

Today, no government would negotiate with fundamentalists, and he felt the same way. So he was just ahead of the game. “Why should I comply with these people?” He’s literally playing cards, and people take that as literal, and it’s not literal. I didn’t believe it was literal. I think he was just very clever. You certainly don’t become that rich by not being that clever.

BL: How did you feel about it, Christopher, because it’s a tough challenge getting into the mindset of  man like that?

PLUMMER: Yes, it is and also very fascinating but, as an actor, quite delicious. I’ve played a lot of  villains and cold people in my time. And I know how to handle them because if you make them as charming as possible then they are more frightening.

SCOTT: Yes, that is for sure.

PLUMMER: However, the audience also sees deep within, so I just looked at it as if he was just another rather cold villain that I was handed, and that is how I proceeded.

BL: Well, personally I think what you have both done is not only unprecedented but a historic moment in filmmaking.

SCOTT: Well, thanks. But let me just say I hope I don’t have to do that again. I’m not sure if my heart could take it. [Laughs]

BL: I think that 80 must be the new 40. [Ridley Scott is 80 and Christopher Plummer just turned 88] What  the two of you have accomplished is truly amazing. I wish I had half of your energy!

SCOTT: It’s just a number. You’re as young as you feel!

BL: Christopher, you were extraordinary here, and you even made me love you as Scrooge in The Man Who Invented Christmas.

PLUMMER: Actually, the two parts are quite similar, J. Paul Getty was definitely the Scrooge of his time!