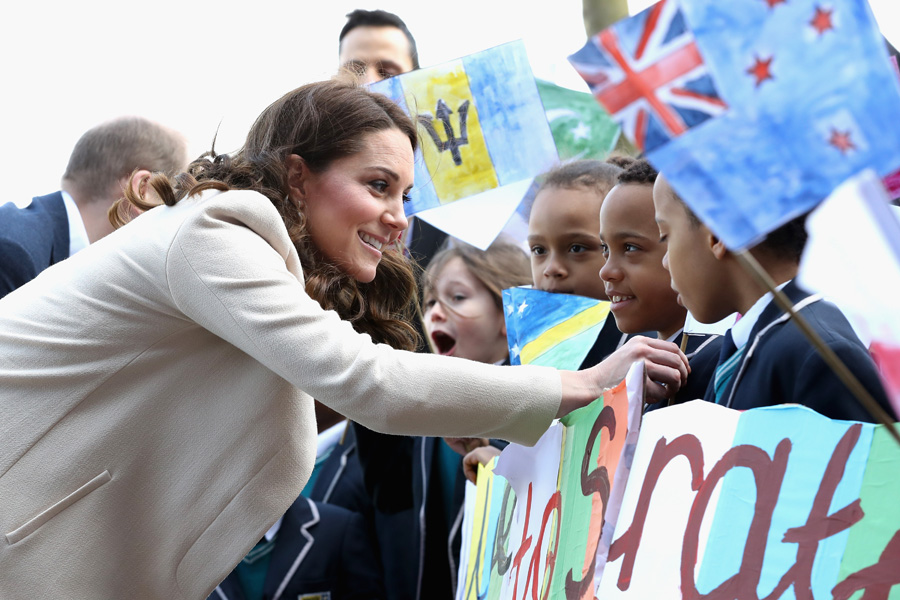 Catherine, Duchess of Cambridge celebrates the Commonwealth at the Copperbox Arena on March 22 in London. Photo: Chris Jackson/WPA Pool/Getty Images.

The countdown is on! With only a few weeks to go before her April due date, a glowing Duchess of Cambridge was all smiles during her last public engagement before the arrival of Royal Baby No. 3.

That’s right: This just might be the last time we catch a glimpse of Kate’s baby bump! (As Prince William revealed to the recently-knighted Ringo Starr, their third bundle of joy is due “any day now.”)

For the occasion, the always-chic Kate donned a pair of black trousers, a Hobbs top and a gorgeous cream coat by Goat as she greeted the crowds at Olympic Park in London on March 22. And in heels, no less!

The Duchess and her hubby were on hand to visit the Copper Box Arena, in benefit of SportsAid, which helps foster the Olympic, Paralympic and Commonwealth dreams of British athletes. It was the perfect final outing for the naturally sporty Kate — even if she did have to watch some of the events from the sidelines.

Now that Kate has officially kicked off her maternity leave, we’ll be seeing a lot less of the Duchess — according to reports, she will not be returning to royal duties until the autumn. Although she may make the occasional appearance at some family functions in the coming months (ahem, like a certain little royal wedding on May 19), it won’t be in an official working capacity.

Although Kate’s due date has not been revealed, it’s thought that the baby is expected around the Queen’s birthday on April 21.

No doubt this will leave Kate plenty of bonding time with Prince George, 4, Princess Charlotte, almost 3, and the newest little Windsor.