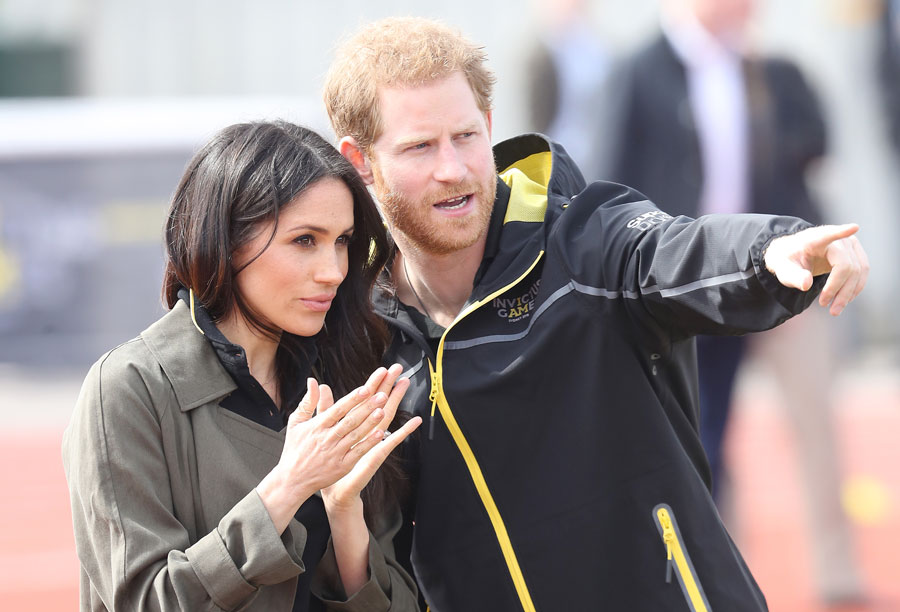 There are less than six weeks to go before their May 19 nuptials, but Prince Harry and Meghan Markle have shown no signs of stepping back from their overpacked schedules.

On April 6 it was all business as usual as the royal couple were out and about once again, this time to meet with Invictus Games hopefuls at the University of Bath Sports Training Village.

The prince and the former American actress — who recently returned from an Easter weekend in Los Angeles with her mom — are touring the UK together ahead of their wedding. The pair watched as competitors took part in team trials for the upcoming Games, of which Harry is patron. Having served in the Army for a decade, the royal created the sporting competition for wounded, injured and sick servicemen and women. It is the only event of its kind in the world.

Sporting black Invictus Games polo shirts, a relaxed Harry and Meghan watched athletes perform track and field trials before heading indoors to chat with those trying out for the UK’s sitting volleyball team.

Now in its fourth year, the Games will be held in Sydney, Australia from Oct. 20-27 and will see more than 500 athletes from 18 nations — including Canada! — compete in 11 adaptive sports. The royal pair are expected to journey Down Under as spectators.

It’s clear that the Invictus Games is a driving passion for Harry, but I think the the annual event will always hold a special special significance for him on a more personal level, too. After all, who could forget that he and and his bride-to-be made their first public appearance during a wheelchair tennis competition at the 2017 Games in Toronto? Talk about a love match!

After all those months of speculation, I love that they’d chosen to make their debut as a couple dressed in — gasp! — ripped jeans, casual shirts and cool shades. The relaxed vibe really set the tone for how their relationship would be perceived in the public eye, and I think it goes a long way towards helping the younger generation — William, Kate and Harry — modernize the monarchy.

Of course, there’s no denying that the lovey-dovey connection shared between Harry and Meghan has struck a nerve with royal watchers. They have us all rooting for them.

No doubt their televised nuptials will draw record numbers. Admit it, you’ll be tuned in for the big day, too.