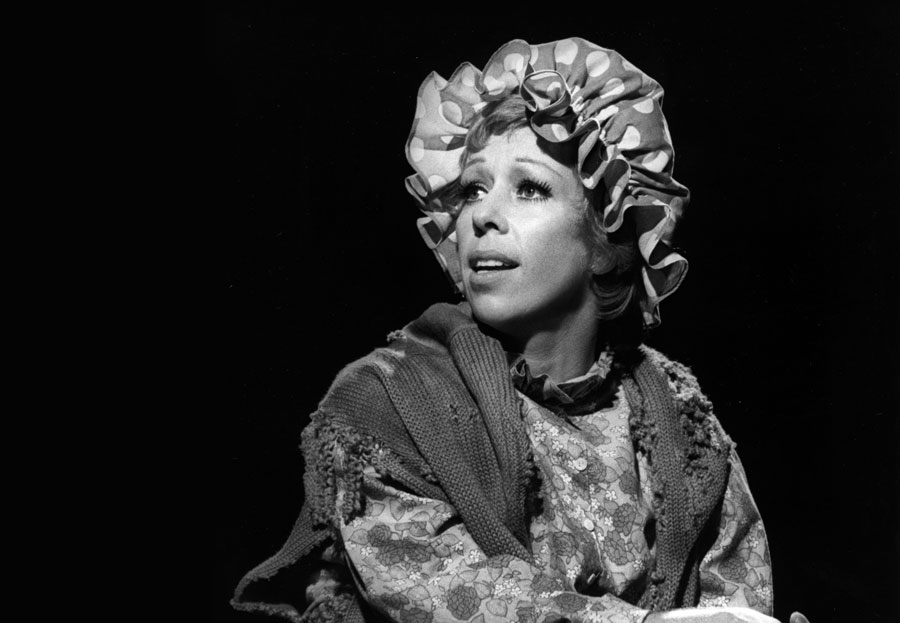 In honour of her 85th birthday on April 26, we’ve dug up fun facts you might not know about the Queen of Comedy.

It’s hard to believe it’s been more than 50 years since The Carol Burnett Show hit the airwaves at CBS, helping to establish its titular star as a comedy legend while showcasing a supporting cast that included Tim Conway, Harvey Korman, Vicki Lawrence, Lyle Waggoner and, later, Dick Van Dyke (not to mention a who’s-who of guest stars, from Sid Caesar to Joan Rivers).

In tribute to the Queen of Comedy, we’ve prepared a Carol Burnett primer of 15 facts you might not know about the beloved star.

1. Burnett was raised primarily by her grandmother, given that both of her parents struggled with alcoholism. This grandmother — Mabel Eudora White — is the same person Burnett would later signal with a tug of her ear at the end of every episode of The Carol Burnett Show — her way of saying, “I love you.”

2. Burnett’s star is on the Hollywood Walk of Fame is in front of the same theatre where she was unceremoniously fired from her job as an usherette in the 1950s. It was Burnett who asked that it be placed there.

3. Burnett originally planned to study journalism in university. She switched majors and instead decided to focus on playwriting. It was only when attending a pre-requisite acting course that she discovered her love of performing.

4. Growing up, her mother had made no secret of what she believed was Burnett’s calling. According to the actress herself, “She wanted me to be a writer. She said you can always write, no matter what you look like. When I was growing up she told me to be a little lady, and a couple of times I got a whack for crossing my eyes or making funny faces. Of course, she never, I never, dreamed I would ever perform.”

5. An anonymous benefactor bankrolled Burnett’s venture from California to New York to pursue her acting dreams. After a student performance at UCLA a man approached her and offered her $1000 to help get her to the Big Apple. All Burnett had to do in return was pay the loan back within five years, without interest, pay the favour forward if she made it big and never reveal the man’s name.

6. Burnett has a history of appearing on children’s TV shows. One of her earliest gigs was playing a ventriloquist dummy’s love interest on a kids show and, later, after she’d achieved her fame, she became the first ever celebrity guest star on Sesame Street, appearing on the show’s inaugural episode in 1969.

7. She starred in a sitcom called Stanley alongside comedian Buddy Hackett as his girlfriend. The show only lasted for half a season in 1956 before being yanked due to low ratings.

8. In the 1960s, Lucille Ball, who’d helped mentor Burnett, offered to create and produce a sitcom specifically for her. Burnett, who had other career ambitions, turned it down.

9. Burnett only got her own variety show, The Carol Burnett Show, because of a clause in her contract with CBS that allowed her to embark on one. Network executives tried to convince her to take a sitcom deal instead, as they didn’t think a woman could maintain a successful variety show.

10. The Bob Mackie-designed Scarlett O’Hara dress made out of curtains — rod and all — from the famous “Went With the Wind” sketch on The Carol Burnett Show, currently resides in the Smithsonian Museum.

11. Burnett met Vicki Lawrence, who she’d later go on to mentor, after Lawrence sent her a fan letter. The pair are also the only two Carol Burnett Show cast members to appear on the entirety of the series.

12. Of all the legendary guest stars who graced the Carol Burnett Show stage over the years, there’s one who proved too elusive even for Burnett — Bette Davis.

13. Burnett believes bad weather is a good omen. According to Biography.com, “From taking tests at school to opening days of shows she was in, she’s trusted that bad weather was a good sign. It was raining the night she talked Eddie Foy, Jr. into giving her his agent’s number, it rained the night she hit the stage for the first time in Once Upon a Mattress, and it rained the first day of work at The Carol Burnett Show.”

14. Burnett has guest-starred on a number of television shows, including Magnum P.I., All My Children (of which she was a huge fan), Touched By An Angel, Glee, Mad About You and Law and Order: Special Victims Unit. The latter two earned her Emmy nominations and she won the award, in 1997, for Outstanding Guest Actress in a Comedy Series for Mad About You.

15. Burnett’s third husband, Brian Miller, is 23 years younger than her. He performs with the Hollywood Bowl Orchestra and the couple have been married since 2001.