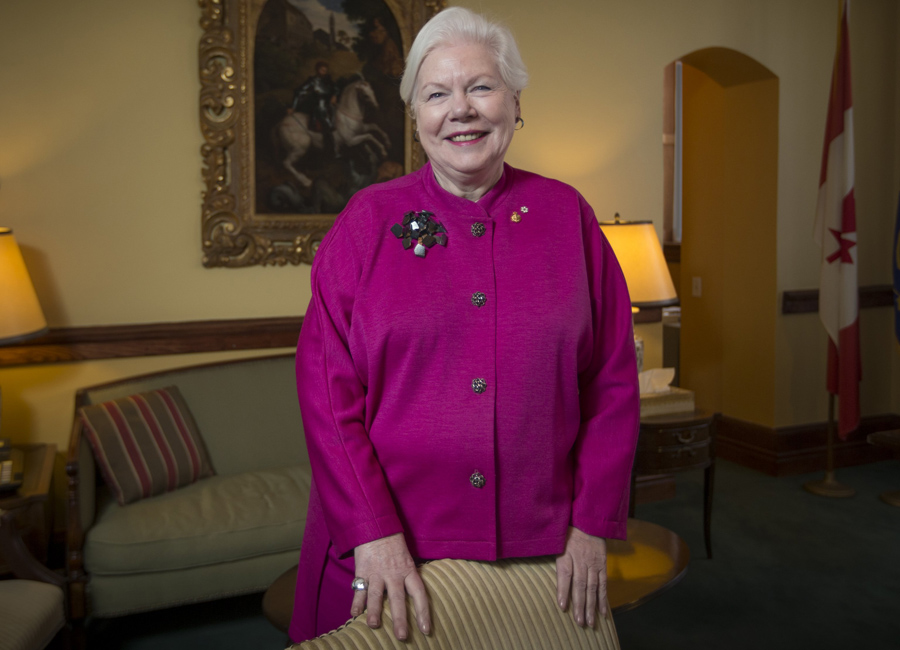 One can’t help but feel a sense of the regal when entering the Ontario Lieutenant Governor’s suite in Queen’s Park in downtown Toronto — the red carpet flanked with national flags from when the Maltese President visited that morning, the burst of fresh flowers adorning a table just inside the front door and, of course, Her Honour the Hon. Elizabeth Dowdeswell herself, as jovial and hospitable a host as one could hope for.

Dowdeswell, 73, might be the Queen’s representative in Ontario, but for decades leading up to her current post she served as an educator, public servant and environmental crusader, including as Environment Canada’s assistant deputy minister and, for six years between 1992 and 1998, as the Executive Director of the United Nations Environment Programme.

And it’s these two passions — educating and the environment — along with her post as Ontario’s self-professed “Storyteller-in-Chief,” that make her the perfect patron to head up a new art exhibit and book called Awakening, which debuted this week and helps highlight the United Nations’ 17 Sustainable Development Goals (SDG’s) through a collection of essays and artwork on display inside the Lieutenant Governor’s suite.

“When you look at a grand plan that the nations of the world have come together to try and do something about, it’s all around sustainability and the sustainable development goals. So we started to think, in the Lieutenant Governor’s office, ‘How could we make citizens aware what those goals are? How could we inspire people to do something about it?’” Dowdeswell says. “And we have the opportunity to stand apart from politics, to actually look at things that take longer time periods to solve.”

The essays focus on the U.N. SDG’s and are penned by prominent contributors, from Jim Yong Kim, President of the World Bank Group (writing about poverty) to Phumzile Mlambo-Ngcuka, Executive Director of UN Women and United Nations Under-Secretary-General (writing about gender equality). But when it came to choosing a curator to mine the Canada Council Art Bank for homegrown artwork for the exhibit, the Lieutenant Governor turned to an old friend: renowned Canadian architect, designer and creative visionary Bruce Mau.

“I think that art kind of opens other channels. The political discourse is one channel and artists really work to think about other channels and about other ways of connecting with people and opening conversations and exploring things in other ways that maybe aren’t so direct and practical, but can be actually more profound in its engagement and deeper in its exploration,” Mau, 58, said. “There is a kind of opportunity to wake up to possibility and wake up to the challenges that we face and the opportunity that those challenges represent. So from a curatorial perspective, what I was looking for is what are artists doing in relation to these kinds of questions, these kinds of challenges?”

Sitting among the exhibited artwork, Dowdeswell notes that the artistic component, and the familiarity of the Canadian landscapes depicted, offers the opportunity to resonate with “what we know is just beneath the surface with people.” Meanwhile Mau, who was born and raised in Northern Ontario, recalls the first time he ever visited a big city (Toronto, as a college student) and saw the work of the Group of Seven at the Art Gallery of Ontario. “They made images of where I grew up and I realized, for the first time, that my story could actually be relevant to other people. I just never thought that until I saw my place in the museum.”

Awakening evokes similar responses, with paintings and photography depicting a cross-section of Canadian landscapes, from ice fishing and Indigenous art to wildlife and the effects of human consumption and waste. Mau points to Kim Ondaatje’s Inco Slag Train, in which the vehicle is depicted crossing a cloudy, neutral-coloured landscape that also recalls memories of his rural youth. “It’s a very beautiful work and … you can see the air. And somehow it’s almost like you can taste the sulphur in the air in the visual itself. And it’s a really interesting, challenging image because it makes a thing of beauty out of something that is really problematic and something [that] doesn’t look like this anymore. We’ve really improved the conditions of this activity. It’s still challenging in many respects but we’re constantly working to redesign how we do these things and change the way we live.”

When asked which works resonate with her, Dowdeswell gestures to Eleanor Bond’s wall-sized painting IV Converting the Powell River Mill to a Recreation and Retirement Centre (above), a brightly-coloured piece depicting an old industrial complex outfitted for seniors, including a life-sized chess board and a water slide running into a pool.

And speaking of sustainability and an aging demographic, Dowdeswell believes that the opportunity still exists for the boomer generation to leave their own positive environmental legacy on the world.

“If you could harness the wisdom, the intelligence, the lived experience that that generation has, it would be wonderful. It would be wonderful in terms of collaborating on solutions, it would be wonderful in terms of imparting that lived experience to the younger generation, who will take it even further because they’re so curious,” she says. “ The word retirement, for many people, has disappeared, and what they’re looking for is something where they will continue to learn, something where they can continue to contribute. And we can certainly use them all in the sustainability movement.”

Awakening is an ongoing exhibition at the Lieutenant Governor’s Suite, Queen’s Park, Toronto. For more information, or to view the essays and artwork online, click here.