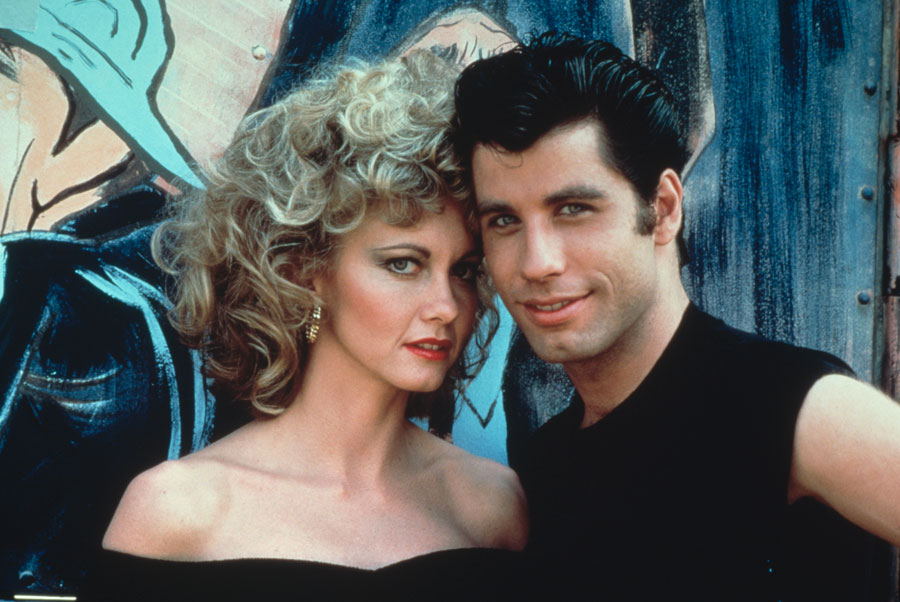 On June 16, 1978, Grease — a movie about a boy and a girl set to a few song-and-dance numbers — shimmied its way into the hearts and minds of audiences around the world. And there it has stayed for 40 years, one of the most beloved movie musicals of all time.

“I thought we were just doing a little musical for teenagers,” director Randal Kleiser once said. “And nobody felt that this was going to be this huge hit.”

Made for $6 million and shot in the summer of 1977 at high schools and other locations around Los Angeles, the Hollywood Reporter was charmed and praised the inventive choreography, visual rhythms and natural chemistry of its stars, although most critics were less than enthused. That didn’t stop the film from becoming 1978’s top-grossing film.

This was thanks, in part, to the charisma of the cast. Olivia Newton-John, who first shot to fame as a singer after winning a 1965 television talent contest not all that different from today’s The Voice is the prim Australian transfer student Sandy (“I had some Champagne at my cousin’s wedding once”). John Travolta, fresh from the triumph of Saturday Night Fever, is Danny — equal parts Elvis and James Dean (in the opening scene in the Malibu surf, Travolta’s red jacket is a nod to the legendary one worn by Dean in Rebel Without a Cause).

We take a look at Grease’s cultural influence and suggest a few reasons why, across generations, legions of fans are still hopelessly devoted to it.

1. “Look at Me, I’m Sandra Dee”: It’s a Time Capsule
Set in 1958, the film follows a group of teenagers in their final year at Rydell High. The seniors arrive singing the chorus to “La Bamba,” a big Richie Valens hit at the time (later, it’s heard playing on the Wurlitzer in the background of the Frosty Palace malt shop scene).

On the first day of production they held a sock hop instead of a table read to get in the mood and the actors stayed in character throughout the shoot. Related cultural markers include The Blob playing at the drive-in, mention of teen heartthrobs Troy Donahue, Sandra Dee, Debbie Reynolds, Rock Hudson and Doris Day (the box office stars of the time), and Pink Girl Marty is corresponding with several marines who have been deployed to Korea.

If you think that the movie’s only a time capsule, however, then you’re not remembering it properly. On the surface Grease capitalizes on a nostalgia, but it’s for a wholesome Americana that never really existed. (“The ‘50s have been romanticized beyond recognition,” is how one producer put it.) This is a movie, after all, in which a lecherous TV host tries spikes a teen girl’s drink with aspirin; and there’s a pregnancy scare. “Did she put up a fight?” is among the most ill-considered, now cringe-worthy anachronisms but even if the overall sexual politics aren’t entirely contemporary, thematically, Grease has more in common with the following decade that rejected conservatism, and those roots are here (further filtered through the freewheeling hindsight of the 1970s).

3. Too Pure to be Pink: Rizzo is a Heroine for the Ages
The sexual politics of Grease are layered, to say the least, although they’re not always coherent or consistent. Both star-crossed lovers undergo makeovers, though the nine-year-old superfans of the movie are unlikely to catch (because it took me until my 30s!) the explicit critique of 1950s sexism that calls out hypocrisy.

Like Rita Moreno’s Anita in West Side Story, Stockard Channing’s worldly supporting character Betty Rizzo is not only a good foil for the straight-laced lead— she’s far more interesting. While she starts off seeming like a mean girl, Rizzo is revealed to be a softie pushed into that role by the same pressures that give the boys their hollow bravado.

She’s a heroine for the ages, but particularly in the context of the 1950s: her defiant solo “There Are Worse Things I Could Do” is a refusal to be shamed for having hormones and it outright rejects the era’s sexual double standard. Unlike, say, Splendor in the Grass, an actual coming-of-age movie from the 1950s that depicts how, after a liaison, a young woman is literally driven insane by sexual desire. More subtle is the mockery of Sandy “too pure to be pink” that also tackles the age-old virgin/whore dichotomy: damned if you do, derided if you don’t. There’s prude-shaming and slut-shaming. But all the teenagers are dealing with some sort of peer pressure (Jan is always on a diet, Frenchy isn’t good at school) while playing with personas to express themselves, worried about fitting in and figuring out their identity.

4. Those Magic Changes: These are Not Your Parents Conservative Values
The 1950s were the first real emergence and depiction of the social culture of adolescence, of youth culture. The 1970s cultural revival of the 1950s, however, is less innocent in the wake of American Graffiti and during the decade-long run of sappy-schticky Happy Days. The politics are less coherent or consistent but still ultimately a rejection of their parents values.

That extends to the much-maligned sequel Grease 2, written by Canada’s own Ken Finkleman (The Newsroom) which, alas, landed at cinemas with a thud in June of 1982. Grease 2 revisits Rydell in the early 1960s Camelot era of the Kennedy White House with a new set of teenagers and revving engines that are from motorcycles. The Pink Ladies have traded their cotton jackets for satin and a sassy new leader Stephanie Zinone, played by Michelle Pfeiffer (just before she made Scarface).

This one’s a gender swap, in terms of whose affections are being won, and Maxwell Caulfield plays Sandy’s clean-cut English cousin. He hopes to woo Pfeiffer’s gum-snapping, wise-cracking expert auto mechanic Stephanie. She’s equal parts Danny and Rizzo and totally unimpressed by the ordinary boys around her and changes exactly nothing about herself for anyone, least of all a guy.

5. Tell Me About it, Stud: The Sexual Politics are More Progressive Than You Think
Grease explores the idea of masculine performance, too. They put up a good front but the boys are mostly talk and are sexually inexperienced (including Kenickie, whose wallet condom dates back to the 7th grade), even if the dialogue and lyrics are sexually-charged. Scenes between Danny and his pals explore facets of not-quite-toxic masculinity. “I know that’s why I’m here, you know, to change,” Danny tells Coach Calhoun, and the humorous montage of his failed sport attempts charts and peels back the layers of his bravado. He’s posturing as a lothario but beneath that glistening ducktail pompadour he’s just a sweet guy who wants to win Sandy’s heart by accomplishing something besides great hair — like lettering in track.

6. Now Can You Hand-Jive, Baby! It Revived the Movie Musical
Until A Chorus Line, Grease was the longest-running musical comedy on stage (fun fact: Richard Gere played Danny in the 1973 London production). “It was every fantasy I ever had, having grown up with movie musicals,” Stockard Channing said at the 20th anniversary reunion. For the film, original Broadway choreographer Patricia Birch adapted and expanded the energetic dance numbers to the dynamic film medium and channeled the golden age of Hollywood musicals. The hand jive craze of movie’s National Bandstand dance contest set-piece in the school gymnasium, for example, is reminiscent of June Allyson and Peter Lawford’s number the Varsity Drag in the MGM musical Good News.

7. Together Forever: It Changed Teen and Pop Culture Forever
Although it’s a 1950s musical fantasia and everything is simultaneously stylized mixed with naturalistic acting, but Grease still set the template for teen genre entertainment. You can see its fingerprints in everything from Pretty in Pink and Beverly Hills, 90210 to the High School Musical franchise and a re-enactment episode of Glee.

Along with Jaws, Grease ushered in the phenomenon of the summer blockbuster (it handily beat even Superman), thanks in part to a cast and crew that became part of the zeitgeist both on and off-screen. Hitmaker Barry Gibb of the Bee Gees wrote the theme song performed by throwback crooner Frankie Valli. The stars arrived at the Los Angeles premiere in vintage convertibles. Initially, Newton-John wore a frothy pink retro prom dress but changed into what she called “Sandy 2” attire: a disco-ready Pink Ladies spandex version for the after-party. The New York premiere party was Studio 54 (which had opened just weeks before) and the cast partied with Grace Jones, Elton John and Andy Warhol.

Following their climactic duet in the carnival’s Shake Shack, sometimes Sandy and Danny still go together like rama lama lama ka dinga da dinga dong. Newton-John would go on to make Xanadu with Gene Kelly before reuniting with lifelong friend Travolta reunited in 1983 for Two of A Kind (and again few years ago for a Christmas duet album). It’s their original swooning “Summer Nights” has become an earworm, however. It ranks alongside supergroup Abba’s “Waterloo” and “Bohemian Rhapsody” by Queen where year after year, according to music licensing trackers, the duet is consistently among the world’s top most-requested karaoke songs.

A new 40th anniversary edition of Grease with digitally restored sound and picture scanned from the original negative is out now in 4K Ultra HD, Blu-ray, DVD and digital