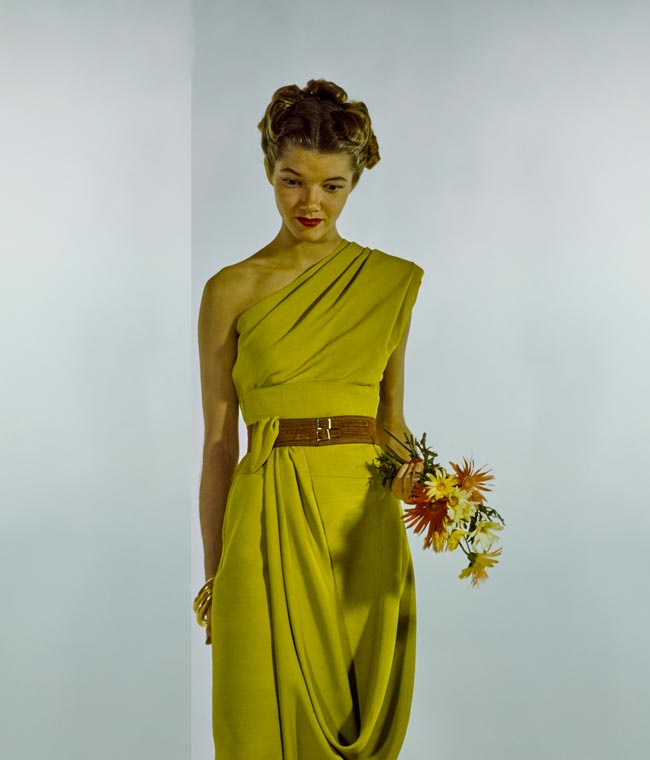 Gone But No Longer Forgotten

For every Donna Karan, Carolina Herrera and Diane von Furstenberg, there are dozens of talented and successful designers who disappeared into obscurity. That’s if they were ever famous at all. In The Hidden History of American Fashion (Bloomsbury, $37.95), essays by editor Nancy Deihl and other fashion scholars restore their rightful place in the history of what is now a $300 billion industry. A picture of three women modelling for The American Look, New York, in 1945 / Photo by by Nina Leen)

When even acknowledged the design innovators Claire McCardell and Bonnie Cashin, who helped create the American sportswear industry, are seldom remembered today, it comes as no surprise that these sixteen little-known pioneers are all women. In most cases their presence in this book is the first published work on their lives and work.

Of the book’s many notable women who created iconic fashion moments and trends, here are a few of our favourites. Turn out they were hiding in plain sight.

The Paris It Girl: VICKY TIEL

If you’ve seen any photograph of Elizabeth Taylor in a caftan, then you’re already familiar with design Vicky Tiel. Ditto Taylor’s 1960s mini-dress phase, since Tiel pioneered both styles in the mid-1960s. Newlyweds Taylor and Richard Burton were the designer’s first financial backers and as Tiel explains in her own dishy memoir It’s All About the Dress, she even lived with Taylor as part of her entourage for twenty years. They first met in a studio commissary in 1964 after Taylor admired a short outfit on Tiel (who worked in film costume at the time). The following year Tiel created a slinky matte jersey caftan that would be comfortable for jet-set travel, while also highlighting Taylor assets—a style the violet-eyed star wore for the rest of her life. Soon, Tiel had moved to Paris and opened a boutique with Mia Fonssagrives (the opening night party for their Mia Vicky Boutique was a fashion show at Maxim’s in Paris and featured a wrap dress they’d created for the film Candy). She designed the costumes for other films, like Woody Allen’s debut What’s New, Pussycat? and The Only Game in Town, a romp about a jaded Las Vegas showgirl (Taylor) who romances Warren Beatty; the designer is also among the many women who romance Beatty, off-screen.

Inspired by 1950s glamour of Ava Gardner and couture models, in the 1980s Tiel updated corsetry and became popular with the generation of New Hollywood stars on and off screen through her cocktail poufs and ruched strapless jersey 1981 ‘mummy’ dress silhouette — a staple of stars like Anjelica Huston and Goldie Hawn and those catfighting Dynasty dames. Most famously, Tiel’s boned and sculpted off-the-shoulder dress originally created for French actress Anne Parillaud’s 1977 Cannes Film Festival appearance became the iconic red gown worn by Julia Roberts in Pretty Woman.

Decades before Giorgio Armani first formalized the mutually beneficial promotional relationship of lending clothes to stars in the late 1980s, there was Viola S. Dimmitt. A skilled home sewer who became a professional custom seamstress in 1920s Los Angeles during the prosperous birth of Hollywood, Dimmitt is a little-known but important figure in the film industry’s formative years. It was Dimmit who first identified the business possibilities of the red carpet, although it wasn’t called that at the time: a premiere usually consisted of a few steps from the car into the front door of a movie palace like Grauman’s Chinese Theatre.

As a pioneer of the ready-to-wear industry in California Dimmitt was known for wedding dresses and, more importantly, was the first local designer to offer evening gowns. Longtime clients included top Hollywood fashion plates Kay Francis, Ann Sothern and Norma Shearer, who wore her clothes to premieres, photo calls and in publicity shoots. As a manufacturing centre L.A. initially lagged behind New York but the association promoted through movie magazines like Photoplay and Movie Mirror, helped Dimmit become a household name and sell her collection nationally. She understood marketing the concept of Hollywood glamour through fashion to the American public, and vice versa.

Dimmitt also contributed to on-screen style. Until the Academy Award for costume design was established in 1948, film credits for clothes were usually attributed to the head of studio costume design, so while Dimmitt frequently supplied gowns to the MGM, Warner Bros. and RKO studio wardrobe departments, the specifics are undocumented but if you watch any Turner Classic Movie marathons, you’ve admired a Dimmitt creation without even knowing it.

With an eye for beautiful fabrics, designer Mollie Parnis ensembles were worn by several First Ladies. But it’s her work dressing and closely advising both Mamie Eisenhower and later, Lady Bird Johnson, that was most visible. Creating flattering designs primarily for a mature clientele, Parnis helped shape their public images through a longtime styling relationship that focused on conservative interpretations of trends. Hers was stylish and aspirational but crucially relatable clothing, accessible good taste reinforcing the idea of ordinary women swept into the public eye because of their husbands elected to high office. This was particularly important with Mrs. Eisenhower, who as a military wife had previously dressed by mail order catalogue. The designer’s profile was considerably bolstered when, at an event in 1955, both the First Lady and one of the guests on the receiving line wore the exact same Model 448 printed shirtwaist dress. “LIFE magazine reported the incident with a typical patriotic spin, celebrating the good American fashion sense.” Queen Elizabeth with US President Dwight D. Eisenhower and his wife Mamie, in her favourite Mollie Parnis outfit and pearls. The ensemble is now in the Eisenhower Presidential Museum in Kansas.

Mrs. Johnson, for her part, met Parnis while shopping at Neiman Marcus in Dallas early in her husband’s political career and wore her designs before becoming First Lady; they formalized their relationship in late 1963. As Jacqueline Kennedy’s successor in the White House she was subject to especially intense fashion scrutiny, so Parnis consulted and revitalized Mrs. Johnson’s wardrobe for the new gamut of high profile official functions, still always keeping to simple, tailored good taste. At the same time, society decorator Billy Baldwin furnished Parnis’s Park Avenue duplex, which thanks to her extensive social and political contacts, became a popular cultural salon throughout the 1970s. Parnis was smart to capitalize on her work with the White House and the attendant rise of reporting on American designers role in ‘fashion diplomacy’ and the social set.

Yves Saint Laurent looked to the Russia and the African continent, but Tina Leser looked everywhere. A winner of both a coveted Coty and the Neiman Marcus Award, she also gave Liz Claiborne her first job in fashion (as a sketch artist). Leser’s aesthetic was profoundly influenced by the sights on far-flung childhood travels with her mother, a Main Line heiress with a free-spirited, artistic streak. Using details from historic and traditional costume, she subtly integrated international local flavour subtly into the fashion vocabulary and materials (practical jersey and cotton) of American sportswear. Part of it was the bohemian California upbringing in a philanthropic arts household, and a later second marriage to a Pan-Am pilot only expanded her references (on one memorable around-the-world trip Leser returned with nineteen suitcases overflowing with collected items). From her first boutique in Honolulu in the 1940s, Leser’s swimwear line’s asymmetrical bandeau straps (a detail borrowed from traditional Balinese costume) and matching sarong with built-in shorts was a sensation, as was the draped white jersey hostess dress with a skirt inspired by the silhouette of the Indian dhoti. Her collections reflected a multi-cultural point of view and regularly featured sari, Thai and Japanese silks. When it comes to sustainability, you can also thank Leser. As early as the 1950s, she prioritized fair trade and a global approach to design and production, sourcing artisan textile producers and manufacturers in the locales that provided so much of her inspiration.

Anonymous Was a Woman: LIBBY PAYNE

Like many of her contemporaries, Libby Payne is the most influential designer you’ve never heard of. That’s because her own name never appeared on the label of her most famous creation. Before the advent of the clothing designer as celebrity in his or her own right, many like Payne worked in the design department of manufactured labels like Lilli Ann, Jonathan Logan, Bobbie Brooks, and Toni Edwards and while these stealth designers disappeared into obscurity, they were instrumental in shaping mainstream mid-century fashion trends.

Payne’s strategy for the “Mrs. Main Street America” demographic and moderately-priced dress market, for example, was so astute that in the 1950s she earned a salary the equivalent of $5,000 a week: she kept costs low and profits high by keeping the garment pattern itself simple and relying on interesting print and trimming details for pizzazz. In 1951, her cheerful denim shirtwaist for sportswear company Bobbie Brooks (known as Style #862) was featured in Seventeen and became such a hit that it remained a departments store staple for two solid years until 1953, selling hundreds of thousands of units from coast to coast.

Payne began her career in the emerging ‘junior’ category in the late 1930s but throughout her long career in New York’s Garment District always gravitated to the newest fabrications and colour combinations offered by fabric sales reps. That helped her remain and innovator even in contemporary young women’s fashion well into the 1970s, when she did also did field research by wandering through SoHo. Under the label Bleeker Street, one of her most successful designs were colourblocked mini-dresses, and a scalloped print knit dress and jacket for that label also sold more than 100,000 units in the mid-1970s — Youthquake customers. None would have guessed she was well into her 60s at the time!

Zoomer contributor Nathalie Atkinson is a Toronto fashion, film and culture writer; follow her on Twitter at @Nathat