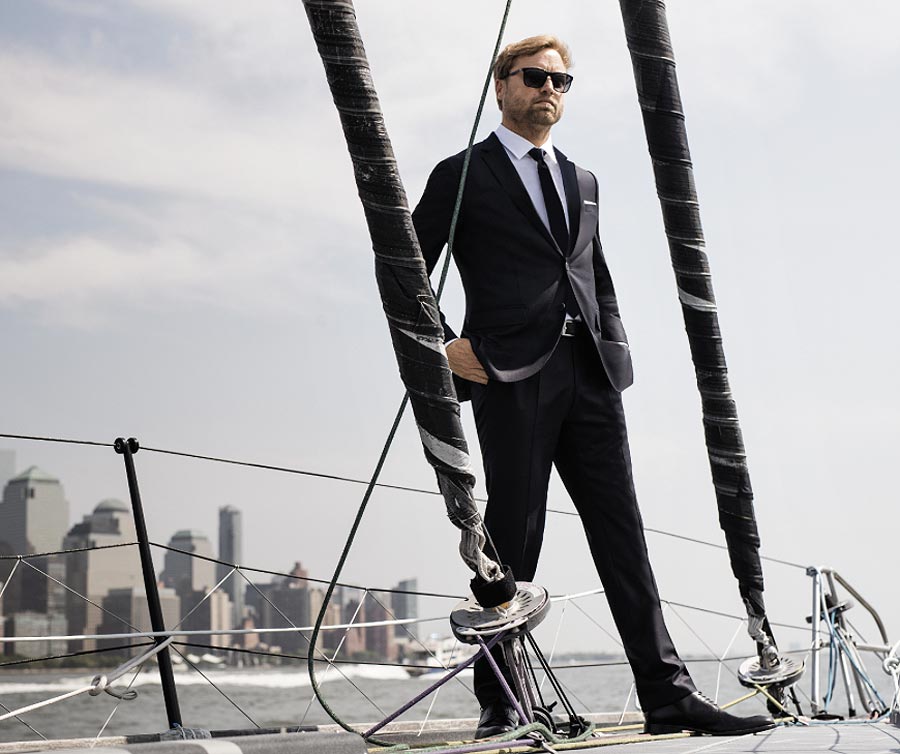 You would need the endurance and nautical skills of Poseidon himself, to enter the Vendée Globe, a non-stop solo yacht race around the world.

Held once every four years, the race covers 28,000 miles across all the major oceans, battles with severe winds, giant waves and the circumnavigation could take up to three months from start to finish. It is the ultimate in seamanship and can turn sailors into legendary sea gods.

“It’s the world’s most difficult sporting challenge and is a true test of one’s mental and physical strength,” says British sailor Alex Thomson, who has competed four times, placing 3rd in 2012 and 2nd in 2016. A yet-to-be-released documentary, Relentless, highlights the trials, tribulations and triumphs Thomson faced during the Vendée Globe.

Earlier this summer, the celebrated sailor was on a promotional tour in select North American cities, including Toronto, with his 60 foot yacht, the Hugo Boss, so named after the famous fashion brand who has been his sponsor for the last 15 years. Organizers like to refer to this challenging sports competition as the ‘Everest of the seas,’ but this oceanic race remains in an elite category of it’s own when it comes to endurance with very few successful conquerors. As Thomson noted in Relentless, close to 5000 people have summited Mount Everest but merely 200 have sailed non-stop and solo around the world.

This is a trek with a unique set of strenuous tolls. There is the crushing loneliness – the only other living things the sailors might see are birds and the occasional whale. Sleep amounts to just a few hours daily because of a constant checklist of tasks and then there are the vivid hallucinations from lack of sleep. The below deck cabin is tiny and minimal. A mattress serves as a bed, a sink is the extent of a kitchen and the washroom facilities comprise of a bucket. Meals are packages of freeze dried food.

Built for speed, the boat is just 2.5mm thick carbon fibre so there is always a lookout for floating debris, icebergs or whales, which can easily tear a hole.

The race starts and ends in Les Sables d’Olonne, a seaside town on the Atlantic coast of France, where thousands of people will line the seafront on race day to send off the 60 foot majestic monohull yachts with their solo skipper.

It’s usually an emotional day as spectators and the sailors’ families wonder if they will see these same boats making their way back into the port at the end of the race. There is a high probability that most of the participants will be unable to finish the race and will retire due to high winds or waves or damage to the boat. Occasionally, tragedy strikes. In the 1996-97 edition of the race, Montrealer Gerry Roufs was in the second position in the race when he disappeared suddenly in the South Pacific Ocean.

But what makes an individual want to sign up for such a treacherous trek?

For Thomson, he wants to be the first Englishman to win the Vendée Globe. It’s a sport where most of the winners have been the French.

Oddly, sailing was merely a hobby for him as a teen. What he really wanted to be was a helicopter pilot but an eye examination at age 17 put an end to those dreams when he was told his eyesight was so poor, a career as a pilot in the navy was out of the question.

And that’s when he fell back on his hobby as a career and learnt a valuable lesson – always look at the glass as half full.

During his stint in Toronto, select members of the press were invited for a lunch and a viewing of Relentless before taking a short sail on the striking black boat on Lake Ontario.

While the documentary film focuses on three things – a man, his boat and his obsession to win a race – one thing became strikingly clear about Thomson’s survival tactics. Those same lessons can be applicable when tackling everyday life on land.

We highlight some life lessons from the seasoned sailor. ‘In our game, you have to be able to recover from the knocks. If you can’t recover the first time it happens, that’s the end. You have to expect it, deal with it and move forward.’

THE VIEW FROM ABOVE GIVES CLARITY

Thomson works with Ken Way, a mental performance coach, who taught him about ‘the helicopter view.’ This tactic comes in handy when he’s facing, not one, but several tough challenges all at once on the boat. During those overwhelming moments, he says, ’I mentally take myself to the top of the mast and look down at that guy on the boat and ask myself, ‘what does that guy down there need to do right now?’”

TO BOOST YOUR SPIRITS, THINK OF WHAT WILL MAKE YOU FEEL LIKE KING OF THE WORLD

When facing those truly harrowing and isolated moments during the race, Thomson resorts to thinking of what the very best possible outcome of the situation would be and tells himself, “What if I won the Vendée Globe right now? I’d be a legend!”

EVEN IN OUR FAST PACED WORLD, SUCCESS CAN TAKE 20 YEARS TO ACHIEVE

Having competed four times in the Vendee Globe, he’s gone from dropping out of the race after his boat overturned to winning 3rd and 2nd place. And he hopes to continue on that trajectory, when he competes in the 2020 race.
“I’ve been chasing the dream of winning the Vendee Globe for 15 years. I’ve had great high points and low points,” he says. “The aim is to win in 2020 and nothing is going to stop me from achieving this goal.”