All the Highlights from Princess Eugenie’s Royal Wedding 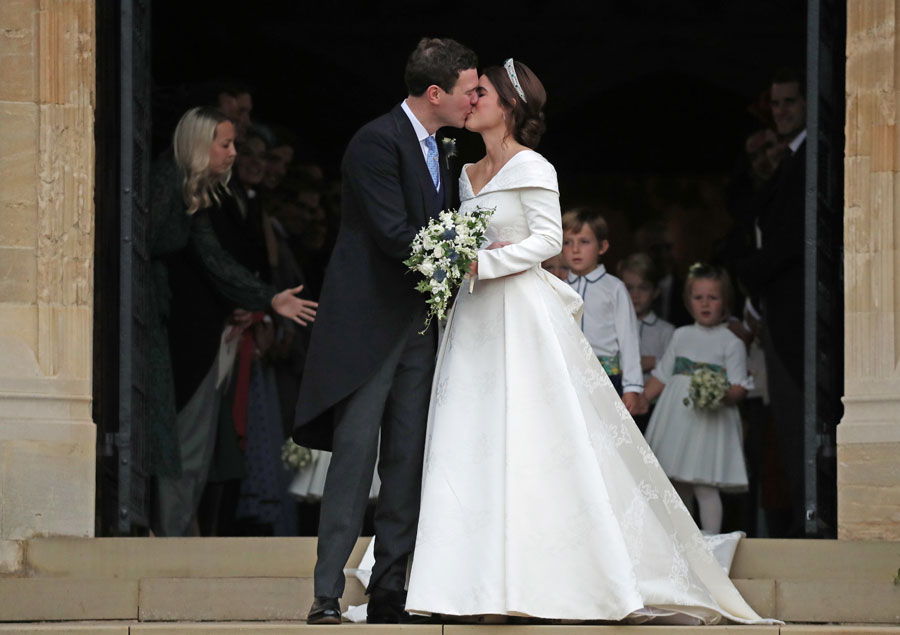 It was a slightly overcast, if breezy, day in Windsor on Friday — ideal weather for an autumn wedding, really.

And so it was that Princess Eugenie, 28, exchanged vows with her longtime beau, Jack Brooksbank, 32, in front of family, friends … and millions of viewers.

Yes, royal watchers had the chance to indulge in the second Royal Wedding of the year. (2018 really has been the Year of the Royal, hasn’t it? All those weddings, babies and public outings.)

You’d be forgiven for feeling a strong sense of deja vu, though — after all, it’s same venue (St. George’s Chapel) with a lot of familiar faces. But this wedding was all Eugenie — more traditional and by-the-book than Prince Harry and Meghan, Duchess of Sussex’s nuptials in May, yet with her own little personal touches. And there’s no denying that the princess was positively glowing, with an ear-to-ear smile on her face for nearly the entire service.

The bride’s father, Prince Andrew, Duke of York, even provided a livestream of Eugenie’s big day on his YouTube channel.

Now, time for the beautiful pictures and our favourite moments!

Eugenie looked positively radiant as the crowds caught their first glimpse of the princess as she arrived on the grounds of Windsor Castle.

The dress
I love the simple, yet classic, look Eugenie opted for with her wedding dress. Her stunning gown, which featured a fitted bodice and pleated skirt, was designed by Peter Pilotto and Christopher De Vos, founders of the British-based label Peter Pilotto.

Mum of the Bride
The bride’s mum, Sarah Ferguson, appeared giddy with excitement, rushing over to greet the crowds upon her arrival at the entrance of St. George’s Chapel. It was a proud day for Fergie, no doubt.

The Maid-of-Honour
Eugenie got a big assist on her big day from older sister Princess Beatrice, who stood by her side as maid-of-honour. I have to admit, though, I was hoping Beatrice would opt for one of her more outrageous fascinators.

The duchess arrives
Meghan, Duchess of Sussex was no doubt breathing a sigh of relief — her low-key arrival at St. George’s Chapel on Friday was a lot less chaotic than the last time she was on the grounds for her own wedding day.

Pretty in pink
Catherine, Duchess of Cambridge’s much-lauded fashion sense was on full display for her cousin-in-law’s wedding day.

Royal cuties
Prince William and the Duchess of Cambridge’s adorable tots stole the show — as expected — as they waved to the crowds and held hands as they walked into the chapel. They’ve been involved in so many weddings recently that the two are seasoned professionals when it comes to page boy and bridesmaid duties.

The crowds assembled near the steps of St. George’s Chapel reserved one of their heartiest cheers for Her Majesty and Prince Philip, Duke of Edinburgh, who arrived shortly before the bride. There had been some whispers in the days leading up to the big day that the retired Philip might bow out from attending — due to illness or, possibly, his longstanding feud with the bride’s mom, Sarah Ferguson. In the end, it looks like seeing his granddaughter get married won out.

Prince George lets bygones be bygones
It looks like Prince George and cousin Savannah Phillips are on better terms today (you may recall the viral video of Savannah pushing George down a hill this past summer after she was spotted covering his mouth at the Trooping of the Colour on the Buckingham Palace balcony). The two were spotted giggling up a storm before walking down the aisle as page boy and bridesmaid.

The walk down the aisle
That smile never left Eugenie’s face as she walked down the aisle arm-and-arm with her father, Prince Andrew, Duke of York.

Sealed with a kiss
Eugenie and Jack make their official debut as husband and wife on the steps of St. George’s Chapel to the sound of hearty cheers from the crowd.

The wedding party
Eugenie and Jack prepare for their carriage ride through parts of Windsor.

The carriage ride
The happy couple waved to the flag-waving crowds as they took a short carriage ride through High Street in Windsor.