The Real Fake News: CBC Radio Show ‘This Is That’ Prepares For Final Bow 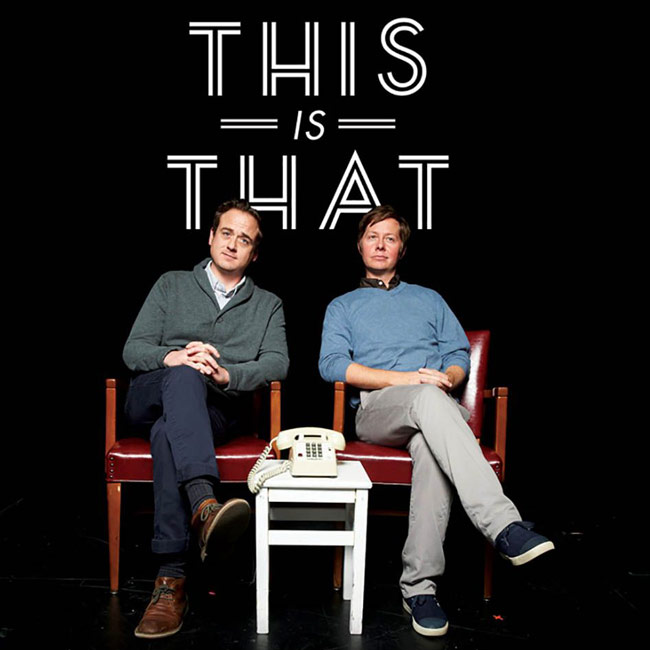 Every week for eight years, CBC Radio producer Chris Kelly — of the “fake news” series This Is That — has fielded hundreds of phone messages from mostly angry, mostly boomer-aged listeners, calling in response to some “news item” the show featured.

He takes the “best” phone calls and includes them in the closing moments of the following week’s show, which is hosted by Peter Oldring and Pat Kelly.

How do we know the complainants are boomers? Well, they’re using phones, and CBC Radio is the most-listened to radio station by Canadians over the age of 55 (and the least listened to by those under 25).

As for what they’re angry about, it could be anything from a proposed Montreal bylaw requiring dogs to be bilingual (ie. responding to commands in both official languages), to the lawsuit against the University of Nanaimo by a student who suffers from “visual allergies” to the Ontario youth soccer league that has decided to de-emphasize competition by playing without a ball. Or it could be the one where Quebec (once again) proposed lowering the drinking age to 14 (or 12, if you’re with a parent).

This is That — which airs its final episode on Dec. 29 — has seen a lot of change in the “fake news” business in the second half of this century. For starters, “fake news” wasn’t even a phrase back then. Donald Trump was merely a bloviating New York real estate huckster whose occasional rumblings about running for president were good for a few laughs. The Russians hadn’t started filling social media with destabilizing and pernicious lies masquerading as fact (or if they had, they hadn’t been caught yet). And the idea that people would believe anything if it seemed “newsy” enough was far-fetched. At least, so it seemed to Oldring and Kelly, who deny they were trying to dupe anybody.

“We both grew up with CBC on in our houses,” Kelly says, on the phone from Saskatoon, the latest whistle-stop in a live farewell tour for the show. “And we just always thought that idea of mimicry of public radio would be a really fun backdrop to do our kind of character comedy. We weren’t ever driven by this notion of making super-heightened fake-satirical news. We just really thought it was a very funny juxtaposition to have outrageous characters and stories told in a recognizable deadpan public radio CBC soundbite.

“We never thought anybody would ever fall for it. But the very first episode that aired, we realized, yep, people were going to fall for it,” he adds with a wry laugh.

Still, “falling for it” was simply a minor embarrassment for some — many listeners, in true Canadian fashion, remained fans of This is That.

This is That was unlike, say, Saturday Night Live’s Weekend Update, which nobody would ever confuse with NBC News. It was tailored directly after shows like As It Happens. “It really does speak to the medium of radio,” Oldring says, “that people come in-and-out, and what often happens is that somebody will be getting into their car midway through our show and think they’re listening to As It Happens.”

This might indeed be a good time for This is That to call it quits. “There’s a very tense culture now around news and information,” Kelly admits. “Because of this sort of prominent conversation around fake news, the last little bit with the show we’ve decided to be more silly and have fun and maybe be less satire-heavy.”

And with the last few episodes being partly recorded in front of live audiences (“predominantly boomers,” Kelly says), audience laughter should remove the urge to assume you’re listening to something serious.

But the Canadian radio show that predated the fake news era got to splash around in it once the tsunami hit. Fox News ran with the “soccer with no ball” story. “They reported that as a true story, kind of like, ‘what are those Liberals going to do next?’” Oldring recalls with a laugh.

In the Toronto newsroom I worked at a few years ago, an editor gave a young reporter an assignment to check on “a story I heard on CBC News.” It involved a meat-trading app called MeatMe, in which people who decide they’re not in the mood, say, for the chicken in their fridge can trade with somebody who has pork chops.

The reporter dutifully made some phone calls, then turned to me and said, “Have you ever heard of a CBC show called This Is That?”

Two years ago, CBC finally had enough of the blowback and made This Is That slap a “satire” label on the website. The last straw was a report about a Mississauga condo development that was inadvertently built without washrooms.

“Just think for a second,” Oldring says. “They built an entire condo, they forgot to put in bathrooms, there’s two porta-potties in the garage. And this story caught fire and people took it as true.”

Adds Kelly, “If you have an iPhone, there’s probably a newsfeed there. And it got in the algorithm and literally there was, like, six million people who saw this story in a day and were reacting to it. That was the turning point where somebody at CBC said, ‘We’ve got to label this!’ It was bittersweet for us, because we were no longer able to infiltrate the internet in the same way.”

But the question remains, now that we know so much of what’s on the internet is fake, are people of our generation more vulnerable to fake news? And what about the reverse: Is a younger generation that’s grown up trusting nothing apt to become pessimistic and jaded?

The This is That live tour runs through Jan. 26, 2019. Find ticket information here.