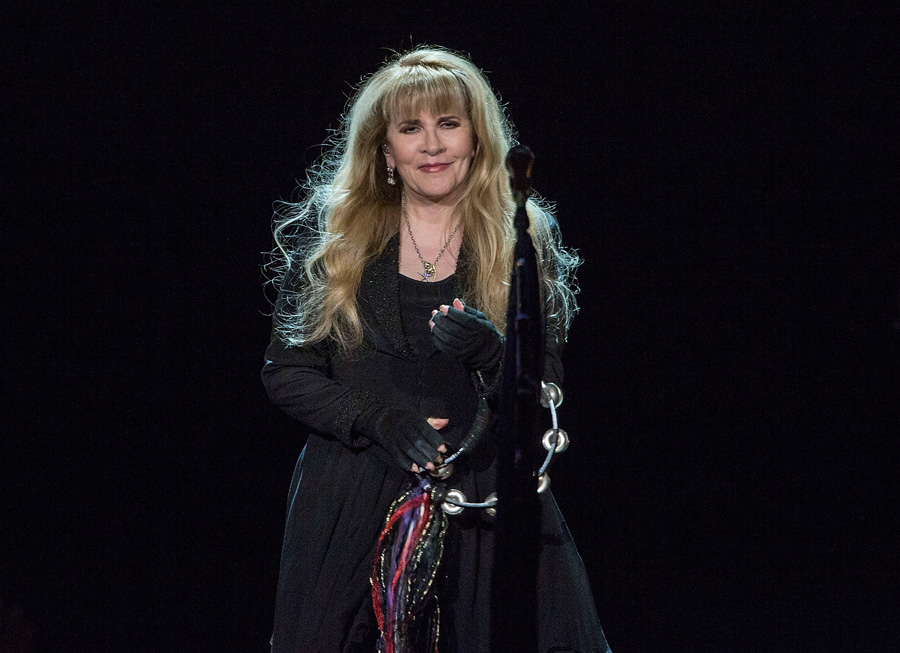 Stevie Nicks and Janet Jackson lead the Rock and Roll Hall of Fame class of 2019. The announcement, made this morning, includes classic rock bands Def Leppard, Roxy Music, the Cure and the Zombies as well as 90s hit makers Radiohead.

With the nod Nicks, 70 and already celebrated as one of the greatest rockers and songwriters of all time, makes history as the first woman to be inducted into the Rock and Roll Hall of Fame twice, having gone in first as a member of Fleetwood Mac in 1998. The Hall of Fame called Nicks, “Rock and Roll’s mystic poet,” adding that, “The unmistakable vocal timbre of Stevie Nicks’s voice has dominated rock. Nicks brought velvet and chiffon into the leather-and-denim world of rock, infusing sounds she admired from the acid rockers and Laurel Canyon singer-songwriters with a hint of black magic.”

“I have a lot to say about this but I will save those words for later,” Nicks noted in a statement. “For now I will just say, I have been in a band since 1968. To be recognized for my solo work makes me take a deep breath and smile. It’s a glorious feeling.”

Meanwhile, Jackson, 52, adds the Hall of Fame credential to her pioneering career on her third nomination for the honour. The Hall calls her a “pop icon” who “built a career so ground-breaking that she’s immediately identifiable on a first-name basis. She explored social issues, themes of empowerment and self-confidence, and influenced generations with her stylized music videos with innovative choreography.”

Jackson also released a statement, thanking the Hall for the induction and noting that, “I am truly honoured and I am happy to be in there with my brothers.”

Members of the Hall of Fame voting committee, as well as fan votes, determine each class of inductees. Artists become eligible for the Hall of Fame a quarter century after their first musical release.

British rockers the Zombies waited the longest of any of this year’s acts for induction, first becoming eligible in 1989, and also weathered the most previous nominations among their class, having been previously nominated in 2014, 2017 and 2018.

“You do start to doubt that it could happen. I’ve tried to be fairly philosophical about it and tell myself that if we don’t get inducted, it’s just a bit of fun. Don’t take it too seriously,” the band’s lead singer and songwriter, Colin Blunstone, told Rolling Stone. “But of course when you’re actually inducted, everything changes. You think, ‘This is a career-defining [and] life-defining moment.’”

By contrast, both the Bryan Ferry-led Roxy Music and heavy metal rockers Def Leppard made it into the Hall on their first nomination.

“Roxy Music added elements of modern fashion, cinema, art, and the avant-garde into rock and roll, and pushed listeners’ perceptions about the essence of pop music. An experiment that envisioned the future of rock and roll and, in doing so, changed the course of music,” the Hall’s statement on the band reads.

And though Radiohead is the youngest group in the bunch, the members of the band range in age from 47-51. The Hall calls them, “underground pioneers of the digital revolution” who “incorporated a wide variety of musical influences — from Pink Floyd to R.E.M. — that challenge even the most dedicated fan. They flipped the music industry on its head.”

While the band thanked the Hall and congratulated their fellow inductees upon announcement of the news this morning, an interview they did in 2017 with Pitchfork paints a different picture of their feelings when it comes to induction.

“I don’t care,” Radiohead guitarist and keyboardist Jonny Greenwood, 47, declared. “Maybe it’s a cultural thing that I really don’t understand. I mean, from the outside it looks like… it’s quite a self-regarding profession anyway. And anything that heightens that just makes me feel even more uncomfortable.”

Whether his attitude has changed with the induction is anyone’s guess, but we’ll likely see Greenwood perform alongside his fellow inductees during the induction ceremony on March 29 at the Barclays Center in Brooklyn.

Click here for more information on this year’s inductees.