‘The Jeffersons’ Actress Marla Gibbs, 87, On Why It’s Never Too Late to Chase Your Dreams 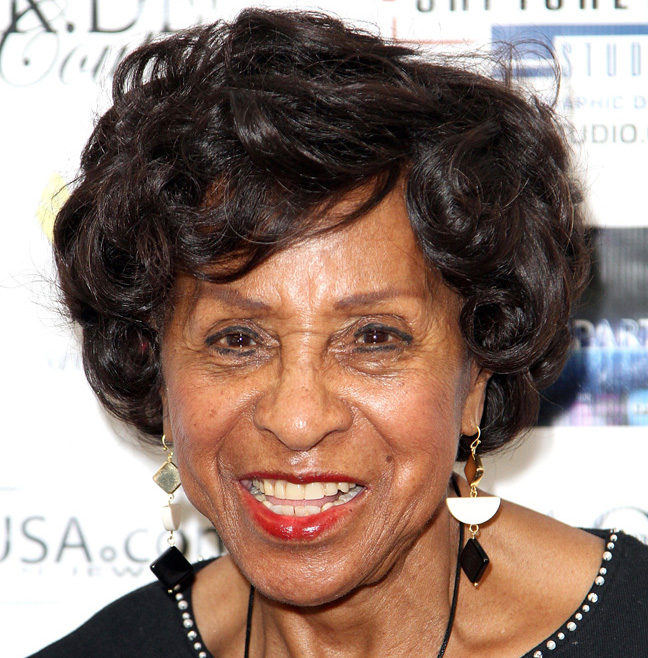 Marla Gibbs — the 87-year-old actress who launched to fame as Florence, the back-talking maid on The Jeffersons and Mary Jenkins on 227 — recites the above song lyrics to me over the phone. They came to her one night in her sleep 12 years ago … but more on that later.

The tune itself — an ode to second acts — is apropos for the Emmy-nominated actress who came to her craft in her 40s, when she moved her family to Los Angeles and co-starred on The Jeffersons while holding down her day job at United Airlines.

More than four decades on, Gibbs hasn’t slowed down a bit, landing guest spots on hit TV shows like Scandal, This is Us, American Horror Story: Hotel and Black-ish, among others. And she currently appears as Grandma Rose in the big screen comedy Love Jacked — a self-described, “sophisticated small-town romantic comedy centered on Maya, a headstrong 28-year-old” who “decides to travel to Africa for inspiration and returns with a fiancé who is not quite what he seems.”

Gibbs herself doesn’t accept much credit for doing what she does at 87. That’s because she tells anyone who asks that she’s actually only 30 years old. Why? She discussed that, Love Jacked, and the story behind the song that came to her in her sleep in a recent interview with Zoomer.

MIKE CRISOLAGO: Your new movie, Love Jacked, is in theatres across Canada. What attracted you to the film and to the role?

MARLA GIBBS: Well, I was requested and I went in and met them and they met my daughter (actress Angela Gibbs) and they wanted her for the film. So I got a chance to work with her for the first time in years and got a chance to go to Canada, which I hadn’t been to before. It was really nice. It was outside of Toronto … a lovely little house. It had everything right there. And a lovely couple … It’s a very sweet film.

MC: What was it like to finally be able to work on a film with your daughter?

MG: Oh, wonderful. We started together in theatre and then she started in TV before I did and she did a movie before I did. So now we have a chance to work together.

MC: So you’re in Love Jacked and in recent years you’ve appeared in top rated shows like Scandal and This is Us and American Horror Story: Hotel. At this point in your career what kind of challenges or roles are you looking for?

MG: I’m always looking for more dramatic roles. That’s what I studied for in theatre but then I ended up in comedy so I said, “Well, this must be where I’m supposed to be.” Which I like, but I really want to do more dramatic roles. So getting to do Scandal was nice. Suddenly I’m being requested [for dramas]. So I’ll wait to see what’s going to happen. Since I’m parked on [age] 30 I have plenty of time.

MC: I read about that. Why do you tell everyone you’re 30 years old?

MG: I say I’m 30, born in ’31 — you do the math and don’t tell me because I don’t count the way you do. We’re spiritual people as well as physical people. The counting [of years] comes from being on this planet but actually as spirits we’re ageless and timeless. So I choose to vibrate on 30, which means that now I have time to do anything I want to do and it’s never too late. And it’s working in my favour because suddenly I’m getting all these parts that I’m not just going out trying to get. And … it reminds me to stay in shape. It reminds me to stay active. It reminds me to stay relevant and that’s what I do.

MC: You’re a well-respected 30-year-old, as most people remember you from The Jeffersons and 227. What memories do you hold most dear from that period of your career?

MG: Oh there’s so many because you’ve got ten-and-a-half years on The Jeffersons, five years on 227, four years on The Hughleys. There’s a couple that were my favourites on The Jeffersons. I did one [episode] with Billy Dee Williams, which turned out to be a classic. And then I did the Aunt Jemima [character] where [George Jefferson] wanted me to be a proper maid. I came out as Aunt Jemima. I really liked that because I like any part that moves well. So I have a lot to do and I’m moving.

MC: I was reading your biography and saw that you worked a regular job at an airline into your 40s, when you decided to embark on an acting career.

MG: I had been at United Airlines for 10 years. And after 10 years I had unlimited passes. So when I got The Jeffersons I wasn’t going to give up my passes because I didn’t know how long the show was going to go. Since I had been there 10 years I could have my pick when we chose shifts … and so it worked for me. The problem was I was never off because … I was still working at United on the weekends. I hadn’t thought about being tired. I was just trying to make it all work.

MC: Was it scary for you at that point in your life to take that leap into acting?

MG: Fortunately no. At that point I started having a lot more faith and a lot more confidence in myself and so I was willing to take the risk. Plus I opened a jazz supper club and I was running that.

MC: What advice, then, could you offer to someone in their 50s or 60s and beyond who wants to try a different path in life like you did?

MG: I say it’s never too late. We had a community theatre … and a lady came to my office and she said, “Ms. Gibbs I’ve always wanted to act.” She was in her 60s. She said, “You think it’s too late?” I said, “Are you still breathing?” She said, “Well yes.” “As long as you’re still breathing it’s never too late.” I said you make one step, God will make two, but you have to make yours first in faith. You have to have the faith and you have to take the step before the spirit will take the two steps. And next thing I knew I had her on The Jeffersons. She was one of my chorus girls. I had three ladies that would come over to the apartment and we would rehearse for church and she was one of them. And then I was laying in bed one day and turned on the TV and she was starring in a TV movie. But, you know, it’s all in your mind. When people start saying they’re tired, or they’re sick, they project out there what they want and the universe acts on it.

MC: And speaking of it never being too late, you were exuberant on social media a few months ago when Cicely Tyson became the first African American actress to receive an honorary Oscar.

MG: Oh, I loved it. I knew Cicely. She was a friend of Roxie Roker’s when we were doing The Jeffersons. So when she did [the play] The Trip to Bountiful [in 2013] I went to see her and I went backstage and she said, “Oh, I miss everybody because I’m in New York and I don’t get to see anybody anymore.” So we wanted to take a picture. She said, “Let my photographer take it.” She wouldn’t let us take it with our cameras. She’s very slick, you know? So he took the picture and she was just gracious. “Everybody, you have to take the picture.” He took the picture. I ain’t never seen that picture, child. I tell you I don’t even know if he had any film in that camera. [Laughs] But she controlled where her image went, and she was phenomenal in that play.

MC: It took 90 years for an African-American actress to receive that Oscar. Over your career how have you seen the representation for people of colour and different ethnicities in Hollywood change?

MG: Things are always where they’re supposed to be whether you know it or not. What I see now is there’s an African-American in almost every show. They’re not having the African-American sitcoms, but they’re on every show. If you watch there’s a doctor, or there’s so and so, they’re everywhere. So we have to recognize that … The show I’m on right now, The Neighborhood, that’s an African-American show but it’s a mixed show. And when I did The Hughleys that was a mixed show. As a matter of fact The Jeffersons was a mixed show. We had the Willis [family] and we had the doorman. So actually they’re all mixed because we’re really all one. Until we recognize that we are all one and treat each other, and love each other things are always going to be difficult. It’s when somebody tries to be better, or different. We have different ideas, and different challenges but pretty much we have the same challenges … And when you realize if you need a kidney I would give you a kidney, if you need a heart transplant I would give you a heart transplant. If I’m compatible with you, it doesn’t make any difference about race … So we’ve proven it over and over again but people still don’t get it. I don’t understand. We just have to keep on loving and doing what we believe is right and being spiritual and it’ll work itself out in time.

MC: That’s a beautiful way to put it. Before we go I wanted to ask you what goals you still have for yourself in your career?

MG: [I’m] writing my book now. People keep saying, “You should write a book.” I say, “About what?” “About your life.” They think I must have had some big, phenomenal thing going on in my life. I had the same challenges other children have and sometimes worse and sometimes a little better. So I did. I always wanted to sing, and I finally did a CD … and I did the CD in 2006. But the end of 2006 I had a brain aneurysm so we never got it out there. So my grandson still wants to put it out there, so we’re still working on that. So we’ll see. And the name of it is It’s Never Too Late.

MG: And I wrote a song for it that says it’s never too late … That came to me at 4:00 in the morning. I’d asked spirit for a song to go with the title It’s Never Too Late. We were getting ready to record it and I woke up at 4:00 in the morning and I had that song in my head — all the words, the tune … we had this wonderful music and we did this CD. Then I had this aneurysm. So October 26th, 2006 I was going to see Lee Meriwether and Beau Bridges do Love Letters. I got there and I went to the restroom before the show started and when I leaned over to flush the commode I heard something go “ploop” in my head. Whatever it was it wasn’t good. And I kept looking but I couldn’t see anything in the mirror so I kind of backed up to the door and that’s where they found me, on the floor.

MG: So from there they sent me to the hospital … They were thinking I was a little miracle baby. There’s a lot of people that had the kind of aneurysm I had [and] don’t make it. So I said, “Well I must be here for a reason. So I just keep on going and doing what I do.”

Love Jacked is in theatres now. Check your local listings for show times.