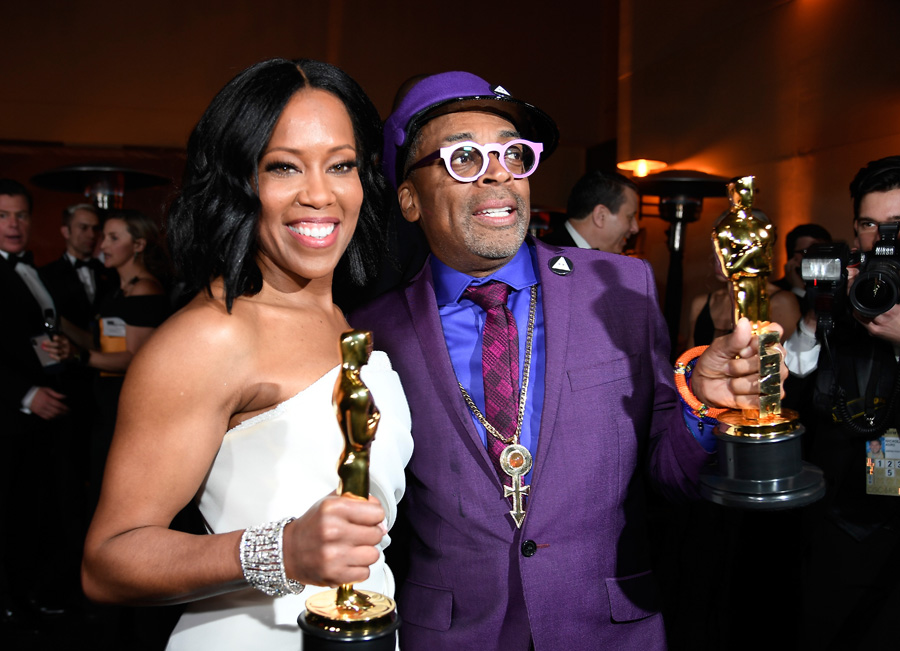 First it was the widely panned idea for an Oscars Best Popular Film category. Then, it was the controversy over homophobic tweets posted by Kevin Hart, which ultimately left the show without a host. And then there was the announcement that four categories – Best Cinematography, Film Editing, Live Action Short, and Makeup and Hairstyling – would air during commercial breaks, the uproar over which caused the Academy of Motion Picture Arts and Sciences to reverse the decision. And, of course, lets not forget the ever-present spectre of #OscarsSoWhite.

Yes, it wasn’t a smooth journey to the 91st Academy Awards, but the 2019 Oscars delivered on some cinema history that helped viewers forget about the multiple out-of-touch missteps that led to this point.

Before last night, only one woman of colour had ever won a non-acting Oscar – Irene Cara, who took home the award for Best Original Song in 1984 for co-writing “Flashdance… What a Feeling” from the film Flashdance. On Sunday, Ruth E. Carter, 58, became the first African-American to with the Oscar for Best Costume Design for her work on Black Panther – her third nomination in the category following Malcolm X in 1992 and Amistad in 1997. The win also made history as the first Oscar for a Marvel Studios film (it won six Oscars overall).

“This has been a long time coming,” Carter said in her acceptance speech, in which she thanked her 97-year-old mother and called her “the original superhero.” She also noted that, “Marvel may have created the first black superhero, but through costume design we turned him into an African king.”

Black Panther’s Hannah Beachler, meanwhile, was already the first African-American woman to be nominated for Best Production Design, and with the win became the first to win the award, delivering a tearful acceptance speech in which the 48-year-old declared, “I give the strength to all of those who come next, to keep going, to never give up. And when you think it’s impossible, just remember to say this piece of advice I got from a very wise woman: I did my best, and my best is good enough.”

“Do not turn that motherf***ing clock on!” Lee warned, referencing the time limit winners are allowed for speeches before they’re played off by music. Not surprisingly, Lee’s speech veered into the political, with the director referencing the 2020 American presidential election and earning a standing ovation by imploring, “Let’s all mobilize. Let’s all be on the right side of history. Make the moral choice between love versus hate. Let’s do the right thing!”

Another director, Alfonso Cuarón, 57, whose biographical film Roma proved an Oscar favourite, entered the night as the first person ever to be nominated for four different awards for the same film (Best Director, Original Screenplay, Cinematography and as producer for Best Picture). He took home the awards for Best Director and Cinematographer, also making history as the first person to win the cinematography award for a film he directed. Roma also won Best Foreign Language film, marking Mexico’s first win in the category.

Cuarón charmed the audience with his multiple acceptance speeches, including when the Mexico native noted, while accepting the Best Foreign Language Film Oscar, that, “I grew up watching foreign language films, films like Citizen Kane, Jaws, Breathless, The Godfather…”

And even some Canadian content made history on this night, with Canadian-American computer-animated short film Bao winning for Best Animated Short Film while its Chinese-born Canadian director, Domee Shi, stands as the first woman to ever direct an animated short film for Pixar.

Of course, for all the goodwill the Academy earned for the diversity of its winners and the history-making moments this year, the selection of Green Book – the biopic about the unlikely friendship between an Italian-American bouncer played by Viggo Mortensen who drives African-American classical pianist Don Shirley, played by Mahershala Ali, on a concert tour through the American south in the 1960s – as the Best Picture winner, as well as Best Screenplay (Ali, 45, also won Best Supporting Actor), left many signing off the show with a bad taste in their mouths.

Spike Lee was among those in attendance who refused to applaud the film’s win, instead reportedly attempting to leave the ceremony altogether, “waving his arms in disgust … when presenter Julia Roberts announced that the controversy-hit film had won. However, he was stopped at the doors and forced to return to his seat once the speeches had stopped.” Afterward he joked with reporters that the Green Book win drove him to drink six glasses of champagne and drew comparisons between this ceremony, where his film BlacKkKlansman lost the Best Picture Oscar to Green Book, and the 62nd Academy Awards in 1990, where his celebrated film Do the Right Thing, about racial divisions and police brutality in a Brooklyn neighbourhood, failed to win the Best Original Screenplay Oscar while Driving Miss Daisy won Best Adapted Screenplay. “I’m snake bit,” he said. “Every time someone’s driving somebody, I lose.”

Immediately after the ceremony, the Los Angeles Times published a story calling the film, “insultingly glib and hucksterish, a self-satisfied crock masquerading as an olive branch. It reduces the long, barbaric and ongoing history of American racism to a problem, a formula, a dramatic equation that can be balanced and solved. Green Book is an embarrassment; the film industry’s unquestioning embrace of it is another.”

The sentiment echoed many observers on social media, who also pointed to both accusations from Shirley’s family that the film is a “symphony of lies” and an anti-Muslim tweet by the film’s screenwriter Nick Vallelonga that recently resurfaced (Ali, the film’s Oscar-winning co-star, is Muslim), as well as the strength of the other Best Picture contenders, including Black Panther and BlacKkKlansman, as reasons the film didn’t deserve to be celebrated with the top honour.

The broadcast – the first in three decades without a host – moved much faster than usual because of it and offered other surprises and uplifting moments.

Olivia Colman, 45, landed the upset of the night when she won Best Actress for her royal role in The Favourite, edging out the betting favourite Glenn Close, 71, who’s wracked up awards for her starring role in The Wife and reached the dubious milestone as the most nominated actress without a win in Oscars history, with seven nods.

Colman’s flustered and sincere speech – a highlight of the ceremony – saw her note, exasperated, that, “It’s genuinely quite stressful. This is hilarious” before acknowledging Close by adding, “You’ve been my idol for so long. This is not how I wanted it to be.”

And the live performance of the Oscar-winning song “Shallow,” from A Star is Born, by Lady Gaga and Bradley Cooper, brought the house down both for the duet and the body language the pair displayed on stage. Cuddled up on the same piano bench as Gaga played, Cooper pressed his cheek to hers, carrying the romance of the film over to the Oscars stage and delighting fans with one more glimpse of the pairing as award season comes to a close.

Other winners on the evening included Regina King, 48, who took home the Best Supporting Actress award for her role in If Beale Street Could Talk and Rami Malek, who won Best Actor for playing Freddie Mercury in the Queen biopic Bohemian Rhapsody.

“We made a film about a gay man, an immigrant, who lived his life just unapologetically himself. The fact that I’m celebrating him and this story with you tonight is proof that we’re longing for stories like this,” Malek said in accepting the award. “I am the son of immigrants from Egypt, a first-generation American. And part of my story is being written right now. And I could not be more grateful to each and every one of you, and everyone who believed in me for this moment. It’s something I will treasure for the rest of my life.”