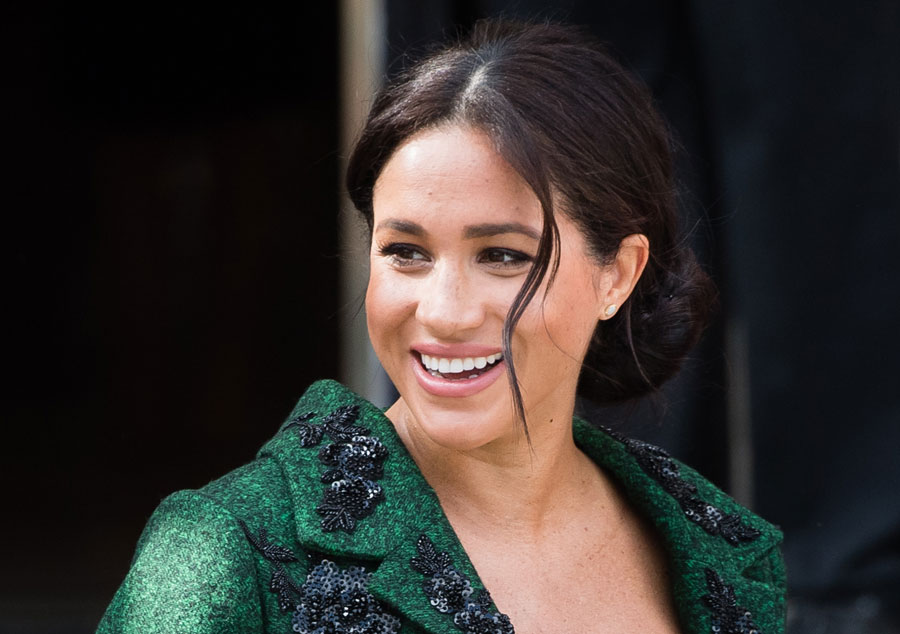 The very pregnant Meghan, Duchess of Sussex and Prince Harry were on Royal walkabout today in London to celebrate Commonwealth Day. The theme of the event was to showcase the diversity of young Canadians who are living in London and around the U.K.

The celebration took place at Canada House, in London’s Trafalgar Square. The royal couple were given a tour by Canadian high commissioner Janice Charette, who apparently told them: “We trust that your visit to Canada House today has served as a reminder of happy times spent in Canada. We do kind of claim you.”  Those within earshot heard Meghan exclaim, “I’ll take that!”

Meghan lived in Toronto for several years while filming her series, Suits, and Harry visited her in the city during their whirlwind courtship. It was also in Toronto that Meghan and Harry made their first public appearance at the Invictus Games in 2017.

Given Meghan’s past as a Hollywood starlet, it should come as no surprise that she pulled out all the fashion stops, choosing a gorgeous green coat with black applique by Montreal-born designer Erdem, and 4-inch heels by Acquazzurra.

According to The Daily Mail, as part of the event that saw approximately 30 kids participating, Meghan and Harry made maple taffy — which as Canadians we know is that magical and sticky confection made from maple syrup poured over snow. How many of us recall doing this exact ritual each winter as children?

Meghan was spotted giving hers to a little girl who had already consumed two. Prince Harry and Meghan, Duchess Of Sussex are greeted by a Mountie and a Canadian child outside Canada House. (Photo by Karwai Tang/WireImage)

As the dynamic duo were leaving Canada House, they were presented with  gifts for Baby Sussex; a Canadian maple leaf baby bodysuit from Hop & Moo and a pair of Manitobah Mukluks infant moccasins.

Harry made staff laugh by sniffing inside the moccasins, saying: ‘I’m sniffing the insides to check if they are leather or not, not because they are smelly.’

Once outside, while teetering gingerly on her high heels and gripping Harry’s arm for balance, Meghan was given flowers by two Ottawa-born children whose parents work at Canada House.