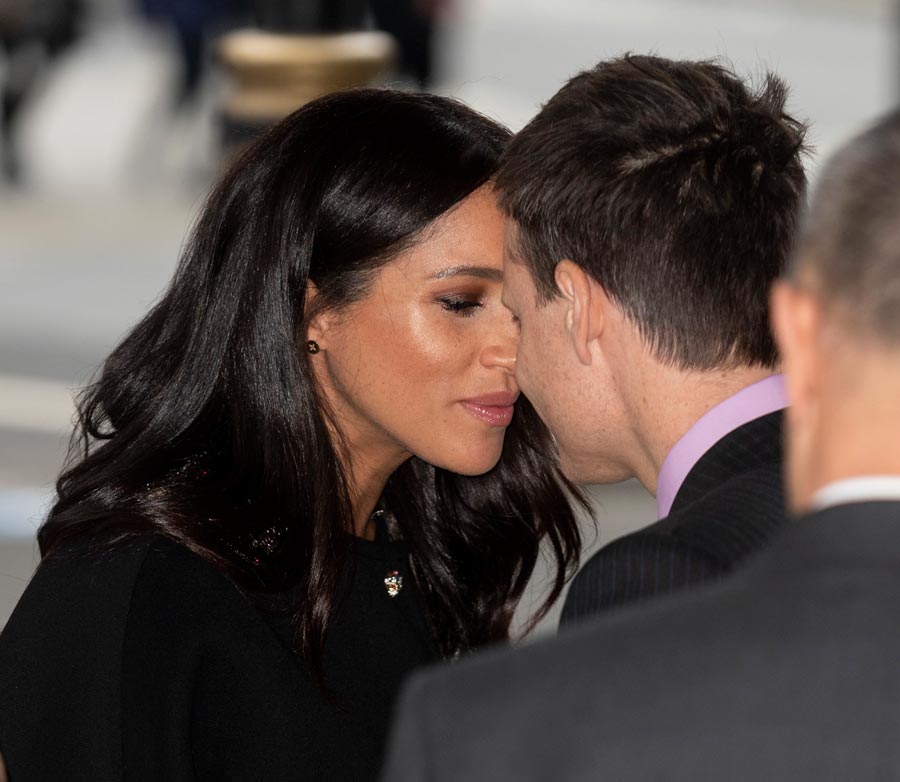 Meghan, Duchess of Sussex at New Zealand House on March 19, 2019 in London, England. The visit was following the recent terror attack which saw at least 50 people killed at a Mosque in Christchurch. (Photo by Mark Cuthbert/UK Press via Getty Images)

Prince Harry and the Duchess of Sussex made a sombre appearance today at New Zealand House to sign the book of condolences for the victims of the terrorist attack on two mosques in Christchurch.

Dressed in black, Meghan, who is thought to be starting her maternity leave from public engagements soon, accompanied Prince Harry where the royal couple were greeted by the New Zealand High Commissioner to the U.K., Sir Jerry Mateparae.  Harry and Meghan placed flowers outside New Zealand House. The tribute has grown since 50 people were killed after a lone gunman opened fire at two mosques during last week’s Friday prayers.

Our hearts go out to the families and friends of the people who lost their lives in the devastating attack in Christchurch. We have all been fortunate to spend time in Christchurch and have felt the warm, open-hearted and generous spirit that is core to its remarkable people. No person should ever have to fear attending a sacred place of worship.

This senseless attack is an affront to the people of Christchurch and New Zealand, and the broader Muslim community. It is a horrifying assault on a way of life that embodies decency, community, and friendship.

We know that from this devastation and deep mourning, the people of New Zealand will unite to show that such evil can never defeat compassion and tolerance.

We send our thoughts and prayers to everyone in New Zealand today.

The Duke and Duchess of Sussex have a special place in their hearts for New Zealand. The couple visited there in October 2018 as part of their Royal Tour that also included Australia, Tonga and Fiji.

According to People, Meghan wrote: “Our deepest condolences. We are with you.” Harry signed his name with “Arohanui,” which is Maori for “best wishes.”