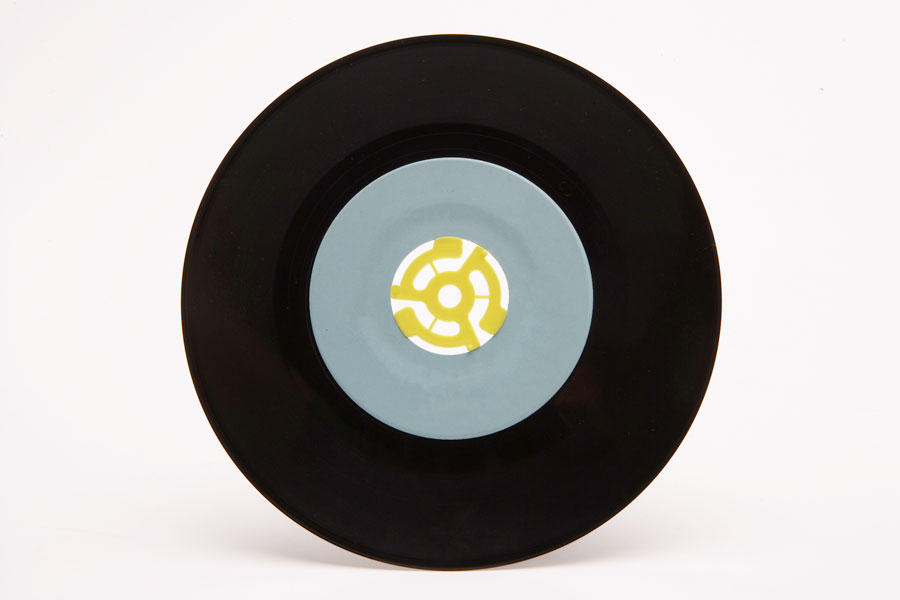 One of my favourite t-shirts was purchased in the gift shop of the Rock and Roll Hall of Fame in Cleveland, and it’s one of their most popular items.

It boasts a single image, a yellow spiral spindle of the sort we used to pop into 45 rpm records to make them fit the turntable (along with the shirt, you can still buy 45s and spindles in that same gift shop).

It invariably prompts one of two responses: “Great t-shirt. Where’d you get it?” or, “What the heck is that?” No guesses as to the demographic of people who ask those respective questions.

My answer to the latter question is always, “What do you think it is?” My favourite guess was: “Well, there were those toy guns when I was a kid that used to fire discs at you. That looks like it could be one of those discs.” (Called Tracer Guns, they’ve been a popular kids’ toy from the ‘60s right through to this century. Anyway, good guess, but no cigar).

Record companies discontinued the 45 by 1990, though the current interest in vinyl has brought some niche production back.

Still, for 40 years, the format was a part of every teen’s life. And now, it’s unrecognizable to most.

We tend to think of the 20th Century as one of dizzying and profound change. And it’s true to the extent that a century that started with flightless humans saw people golfing on the moon by the ‘70s. And we saw it, of course, on television.

But many basic technologies were remarkably durable. The internal combustion engine, introduced at the turn of the 20th, still rules the roads and is only now giving slight ground to electric alternatives. In his boyhood in rural Manitoba in the 1920s, my late father lived in a farmhouse without electricity, but cobbled together a crystal radio that picked up signals from as far away as Detroit. Four decades later, in my own childhood, I made virtually the same crystal radio with instructions from Popular Electronics magazine.

In the adult world, technologies had even longer pedigrees. A slide rule used by an engineer or mathematician in the 20th Century would have been utterly familiar to their counterparts in the 18th.  In my own business, I started out using a very similar piece of old tech called a “sizing wheel” to figure out where to crop pictures for off-set page design and the percentage to zoom them or shrink them. Learning to use a sizing wheel was still required in the Ryerson University journalism course in the ‘80s.

And now? Never mind a sizing wheel. I’m pretty sure that in a few years, no one will remember what an iPod was.

I discover new anachronisms in the oddest ways. When the newspaper I worked for was sold a few years ago, we had to move to a new building, which meant emptying out the farthest corners of my desk. One drawer contained every recording device I’d ever used for interviews going back to the ‘80s – including the first digital one I bought in 2001.

But what drew the attention of some younger reporters were the old cassette recorders. Not the micro-cassettes so much, but the full-size ones. “Get out,” I told one. “You’ve never seen a cassette?” – “Well, obviously I know of them,” he said, as he cradled the old Sony like an artifact from the ruins of Pompeii.

“Sic transit ‘stuff,’” as the Romans would say.

The things that disappear, do so inconspicuously. I had no idea until recently, for example, that songs on the radio that fade out at the end were pretty much a thing of the past. My Millennial son was in the car with me, and The Police’s Message in A Bottle was playing. As Sting repeated “Sendin’ out an SOS… Sendin’ out an SOS…,” Michael asked, “Why in those old songs did they repeat the chorus over and over at the end?” I guessed it was so the deejay could get a head-start on announcing the weather and traffic as the song faded out.

But I decided to look into it further. I was half right, as it turned out. That was one of the advantages of the fade-out in the years of AM top-40 radio, though the fade-out (in performance) could be traced in classical music as far back as the 19th Century.

An article in Slate magazine actually traced the fade-out’s demise. In this decade, apparently the only top-10 Billboard song with a fade-out ending was Robin Thicke’s Blurred Lines (and that was a deliberately retro choice). In retrospect, in 1985, every song in the year’s top-10 faded out.

MP3s and club DJs are accused of killing the practice. In the digital age, everybody is impatient to get to the next tune. Who wants to listen to the previous one fade away like a Doppler effect?

Sitcoms with laugh-tracks are on the endangered species list. Millennials hate them, and mock them with online memes (like that YouTube clip from The Big Bang Theory with the laughs excised and replaced by crickets). Right now, there’s BBT, Mom and Kevin Can Wait, along with the retro reboot series Fuller House, Will & Grace and Roseanne. Arguably the hippest of those shows, The Big Bang Theory’s viewership has an average age of 52.

Which brings us to network television itself. The average network viewer is now in his or her mid-‘50s. That number 25 years ago was 41. Increasingly, my sons’ own favourite programs are podcasts or YouTube channels. The Zoomer cohort is doing its best to keep the medium alive, but most agree network TV is an unsustainable long-term business model.

Landlines, typewriters, newspapers, fax machines, dial-up Internet, they are all mere “things,” that had their day. But they’ll live on among hobbyists and history buffs.