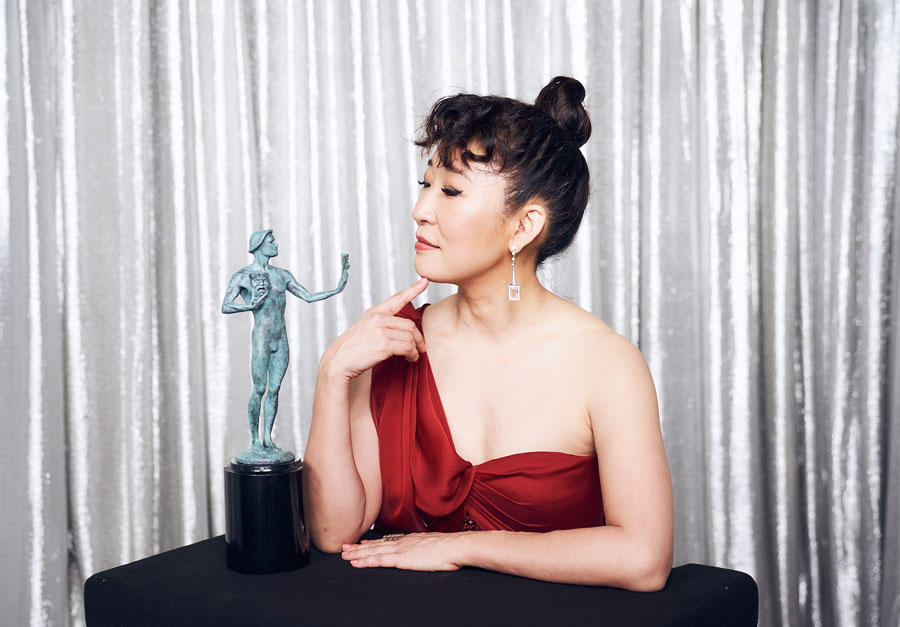 This year’s Time 100: The Most Influential People of 2019 has landed, and on the carefully curated list that includes the likes of Nancy Pelosi, Michelle Obama and Dwayne Johnson stands Canadian actor Sandra Oh. And Oh didn’t just crack the list, she made the cover (one of six honourees). No introduction is needed to millions of Grey’s Anatomy fans where the Nepean, Ontario born actor played Dr. Cristina Yang for a decade.

But it’s her recent role on the comedy spy thriller, Killing Eve that has proven to be the final domino to topple the barriers that had kept Oh, and other performers of diverse backgrounds, out of the mainstream conversation.

With its crackling dialogue, post-feminist messaging and ability to go from searing wit to heart wrenching in an instant, Killing Eve is a show-stopping part for any performer, but Oh owns it. And it has given back to her, almost as a reward for a hardworking career that has spanned decades, giving her the accolades that have poured over her this past year.

“I started acting professionally when I was 15. I’m 47 right now. It’s not so much that it took me 30 years to get the role of Eve, it takes this long to have a career,” Oh told Time. “And hopefully with that time and with that work, eventually opportunity will come.” So far, Oh nabbed an Emmy nomination, won the 2019 Golden Globe for Best Performance by an Actress in a Television Series – Drama (it should be noted she also co-hosted the awards show, a first for an actor of Asian decent), and the 2019 SAG Award for Outstanding Performance by a Female Actor in a Drama Series, and appears this month not only on Time’s cover, but also US fashion magazine Marie Claire, and will receive the Governor General’s Performing Arts Award in Ottawa on April 27.

Perhaps things are changing for visible minority performers all around. It was also 2018 when the feature rom-com, Crazy Rich Asians became a smash hit with, you guessed it, an all-Asian cast. That may seem obvious and unremarkable now, but it was only 2015 when filmmaker Cameron Crowe got major backlash for casting white actor Emma Stone as an Asian in his film, Aloha. Oh’s casting in Killing Eve is based on her ability to perform, not her race, and that is progress.

Grey’s Anatomy creator and Hollywood powerhouse Shona Rhimes wrote the text for Oh’s Time cover, “With her nuanced characters, Sandra Oh has chosen to fearlessly take up space in a universe that has not always made space for her. Now, the power of her talented presence makes space for others. And that is a gift to every artist of color who follows in her footsteps.”

It is this last point that bears further discussion; the slow-moving sea change on film and television screens to give diverse stories and characters a voice. It’s a change that Oh has helped move forward, not by force, but by endurance.

“I don’t have to talk about change because my face looks the way that it does, and that speaks more than what I could possibly say,” she explains. “So in some ways, for me, it’s about hanging in as long as I have. It’s a numbers game. Because if you see my face again and again and again, and there is someone who looks like me, I believe there is something that opens up in the psyche and the people we have not considered before, we have not been open to before, suddenly we are.”

Killing Eve season two is airing now on Bravo, and has been renewed for a third.