Brienne & Jaime, Sansa & Theon, Arya & Gendry: Is The Love Fest a Set-Up for a Khaleesi Betrayal? 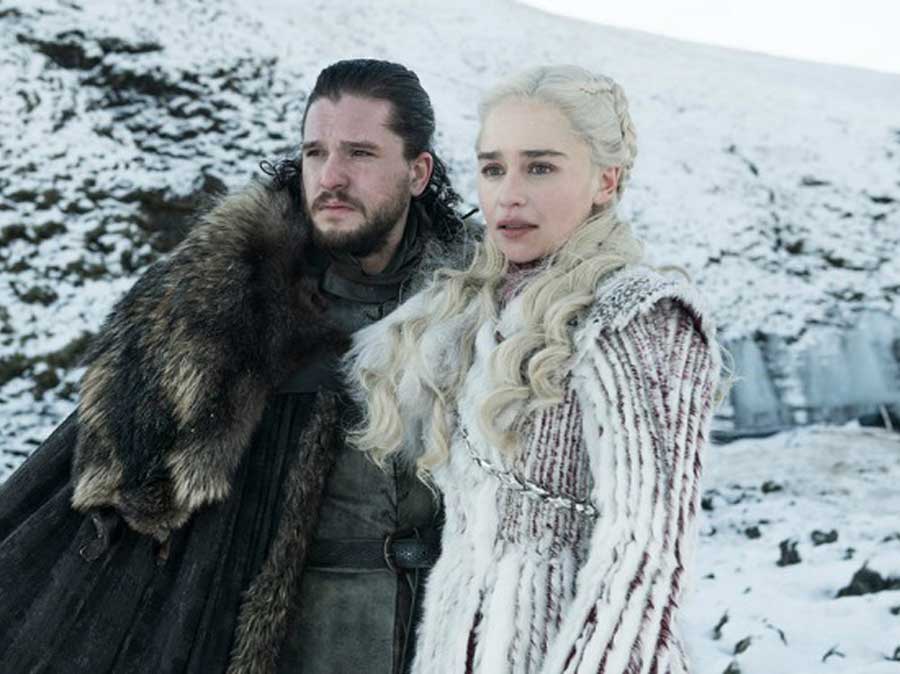 As the hours tick down to the defence of Winterfell against hordes of White Walkers — and presumably one unstoppable zombie dragon — the stats say over-45s are outliers in the Game of Thrones’ audience.

The coveted “18-45” demographic makes up the bulk of its audience, a rarity in TV these days. But the older demo created the biggest splash this side of Kings Landing Sunday when Democratic presidential candidate Sen. Elizabeth Warren, 69, came out as a GoT fan, writing about it in The Cut online.

The show is all about the women, she wrote, and its dynamic sits politically between the pure-hearted Daenerys Targaryen (a.k.a. Khaleesi, the Mother of Dragons) and the incestuous, unprincipled Cercei Lannister, who expects to win the war (and win back the Iron throne) by throwing money at it, courtesy of the Iron Bank.

The possible 46th President of the U.S. knows her stuff, and at least we know where she stands on the hot-button issue of how to run the Seven Kingdoms.
Although, Warren’s backing of Khaleesi sounds oddly like a self-endorsement when she writes, “This is a revolutionary idea, in Westeros or anywhere else. A queen who declares that she doesn’t serve the interests of the rich and powerful? A ruler who doesn’t want to control the political system but to break the system as it is known?”

Wind at your back in the primaries, Senator. A few dragons wouldn’t hurt either.

Meanwhile, Sunday’s second episode of its final season, A Knight of the Seven Kingdoms, featured no appearance by Cercei (though she was mentioned enough times to make a drinking game of it).

This was because the whole thing took place at Winterfell, in an episode that was very much like one of those old war movies, the “smoke ‘em if you got ‘em” night before the battle, when everyone makes peace with their Maker and each other.

That would have been a disappointment to anyone tuning in expecting at least some violence. But the last time they ratcheted up the pre-fight tensions to this extent, the result was The Battle of the Bastards, which to my mind remains one of the greatest depictions of war ever seen on TV or film.

Happily, the Night King’s advancing “army of the dead” dragged its heels (the dead will do that), leaving plenty of time for:

-Jaime to apologize for pushing Bran Stark out a window and leaving him a paraplegic, lo those many seasons ago. Apology accepted. We’ve got a war to fight. And Bran has a plan to lure the Night King into the open using his magic tattoo. And ravens, there’s always ravens.

– Queen Daenerys to have a long-overdue talk to smooth things over with Sansa Stark over the hold she has over the dragon-enchanted Jon Snow.

-Arya Stark and the Hound coming to terms with whatever.

-Arya ending that conversation and hopping into bed with Gendry, the blacksmith who’s forging her some killer Dragonglass weaponry. (Hey, if it’s your last night on Earth…).

-The formidable Lady Brienne uncharacteristically joining the guys for a few drinks — Jaime and Tyrion Lannister, Davos, Podrick and — seriously, my favourite character —Tormund, the flame-haired wild-man who’s crazy in love with Brienne.

In a show that’s often mired in its own direness, you’ve got to love a guy who brags about killing a giant as a child, having sex with his widow and then breastfeeding off her for three months, cementing his manly strength. Who knows how many women have fallen for that line?

In any case, as will happen after a few drinks, Lady Brienne got knighted by Jaime (about time), and is now A Knight of the Seven Kingdoms (hence the title of the episode).

Finally, and most importantly, Jon Snow broke the news to his erstwhile lover Queen Daenerys that she is actually his aunt, and that his real name is Aegon Targaryen (they’ve explained that relationship in both episodes this season, and I’m still going, “Okay, let me see if I’ve got this straight…”).

Though this was in effect an it’s-not-you-it’s-me break-up talk, Daenerys’ first thought out loud was, “If this is true, It would make you the last male heir of house Targaryen. You’d have claim to the Iron Throne.”

Yes, there’s a war to fight, but you could see the wheels turning in the Mother of Dragons’ head. After all is said and done (and possibly a character or two is killed off), methinks Khaleesi may turn out to be more Machiavellian a politician than Senator Warren thinks.