Dressing One’s Age? Sexy After Sixty Ain’t No Sin (Or Forty, or Fifty…) 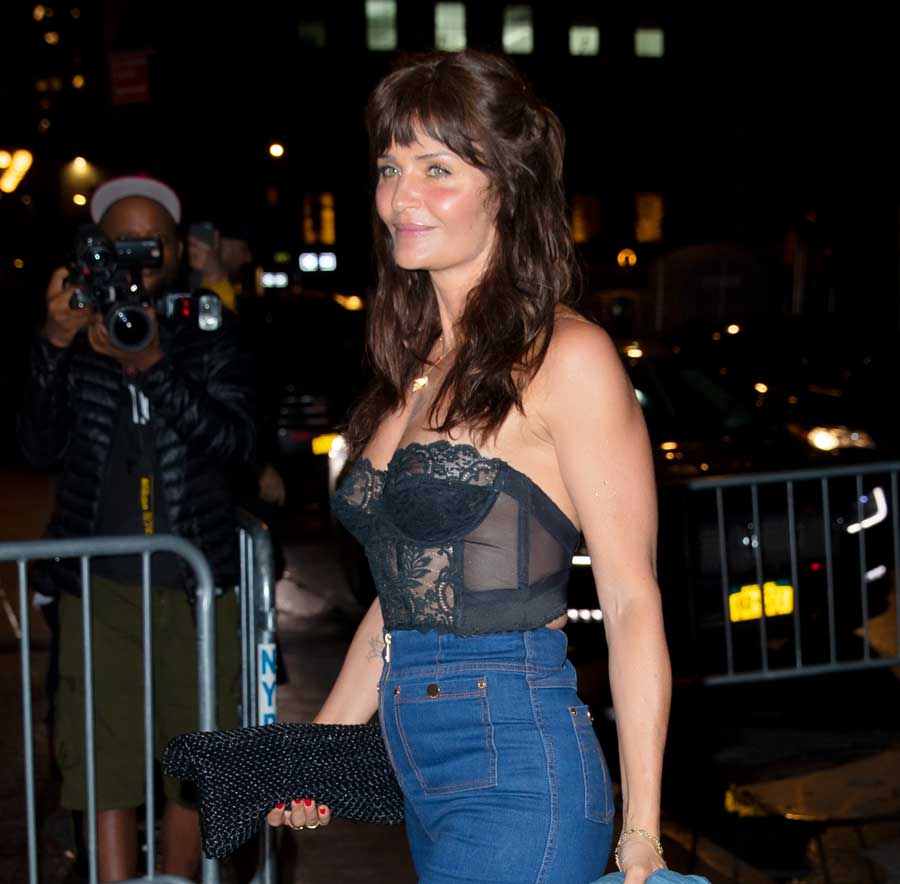 When Helena Christensen stepped out to a friend’s birthday party last week wearing high-waisted jeans and a lacy black bustier, her look was panned by journalist Alexandra Shulman. In her regular and now-infamous weekend column for the Daily Mail, the former editor-in-chief of British Vogue slammed Christensen and likened the look to “the madam in a one-horse town.” The Danish model and photographer, 50, looked ravishing (naturally) yet the headline screamed: “I’m sorry Helena Christensen, you ARE too old to wear that.”

“There comes that point in every woman’s life when, however reluctantly, you have to hand over the fleshpot-at-the-party baton to the next generation,” Schulman, 61, wrote.

You can practically hear the tsk-tsk finger-wagging from the ex-Voguer who disapproves of a model who isn’t 19 dressing in an overtly sexy manner. Leaving aside the obvious (if a supermodel who won the genetic lottery isn’t allowed to dress sexy, what hope is there for the rest of us?), Shulman should know better.

At her age. That’s such an old cliché. For her next trick, maybe Shulman can dispense with the pleasantries and just send women of a certain age away on an ice floe? She sounds less like someone who was previously a juror of the Women’s Prize for Fiction and smart author of two well-regarded novels and more like the unenlightened fellow Mail columnist Piers Morgan.

If a corset is too skimpy, too racy, too sexy for a 50-year-old then I’d best not mention Yazemeenah Rossi, the slinky sexuagenarian who recently starred in a major swimsuit campaign.

And whatever you do, don’t tell Shulman about Paulina Porizkova.

Czech-born supermodel Porizkova unwittingly became part of the argument this week simply by turning the other cheek, so to speak. Three decades after her first appearance in its pages the face (and body) of the 1980s returned to Sports Illustrated’s latest swimsuit issue at the age of 54, wearing nothing but a thong.

Admittedly, while on press tour to promote the new issue the model says she initially gulped when she was told there would be only minor photo retouching — wouldn’t you be? — but is outspoken about the way we talk about women and age. Because even the vocabulary around embracing aging is subtly flawed. Porizkova suggests doing away with any compliment about looking good that comes with a qualifier — ‘for your age.’

That’s in line with the general progress that the body acceptance movement has made on body positivity and attitude, because reforming words matters too. Major brands have ditched the term ‘anti-aging’ (and its claims) and similar claims to age-defying and reversing in favour of verbs like renew, radiate, restore. Even beauty magazine Allure banned the term anti-aging from its pages back in 2017.

In fashion, as much as we’ve done away with other so-called rules and shifted to seasonless dressing, there are ever-fewer ‘dress your age’ tutorials and closet listicles like Things to Banish After 50.

Strangely, Shulman also writes that, “When women’s bodies no longer serve any child-bearing purpose, we find flaunting them disturbing and slightly tragic” and that it isn’t fair but it’s true. But she’s clearly out of date. Generations of women may have internalized the toxically narrow, youth-centric message pushed by mainstream society, fashion and beauty media, but the industry has finally started getting past the era of age-shaming.

Policing women’s closets by age is the same as policing their bodies, whether they’re civilians or supers. The issue isn’t really about dressing sexy, it’s about being sexy. Sheer black lace shouldn’t be shorthand for bordello any more than imposing ridiculous limits to sexiness — and by extension, liking sex unless it’s for having children. It’s repressive and regressive to equate a right to sexiness with fertility.

One of the early storylines on Grace and Frankie, you’ll recall, was about the dynamic duo manufacturing vibrators for older women, to ensure that empowering older women’s pleasure in sexuality was represented in popular culture. “It should be expected,” Lily Tomlin said in an interview about the issue at the time. “It shouldn’t be threatening or so fearful.”

Maybe that’s why the backlash against the ex-Voguer’s opinion has been swift and resounding.

In response, for example, when Christensen posted a photo of herself from the party many of her famous friends like Julianne Moore, Karen Elson, Caroline de Maigret, and Angela Bassett chimed in on Instagram with supportive comments, as did Shulman’s successor Edward Enninful. “She should be ashamed of herself,” Linda Evangelista said of the column, while Naomi Campbell called the piece a “cheap shot.”

“There isn’t a guidebook on how brazenly women can dress as the years pass,” Shulman wrote, hoisting her own pétard. At least she got that right — there isn’t any more, because there shouldn’t have been one in the first place. We don’t dress according to prescribed life stages but based on attitude, circumstance, style and taste. There’s no best-before date on a sense of self— it’s timeless. Whether confidence and attitude expressed by wearing a bustier, pencil skirts, or a polka-dot bikini.

Do you love it? Do you feel great? Then remember the real story behind the first known use of the dismissive term ‘mutton dressed as lamb’ that dates back to 1811 and is attributed to the Prince of Wales in a society gossip journal. But here’s the thing: he used it not in derision but in praise of older women who did not go gently. That’s just one of the reasons to love Kim Cattrall’s Samantha Jones on Sex & the City: “I am fifty fucking two, and I will rock this dress.”