Day 2: As Royals-in-Waiting, Kate and William Are Polished and Professional in Pakistan, as Memories of Diana Abound 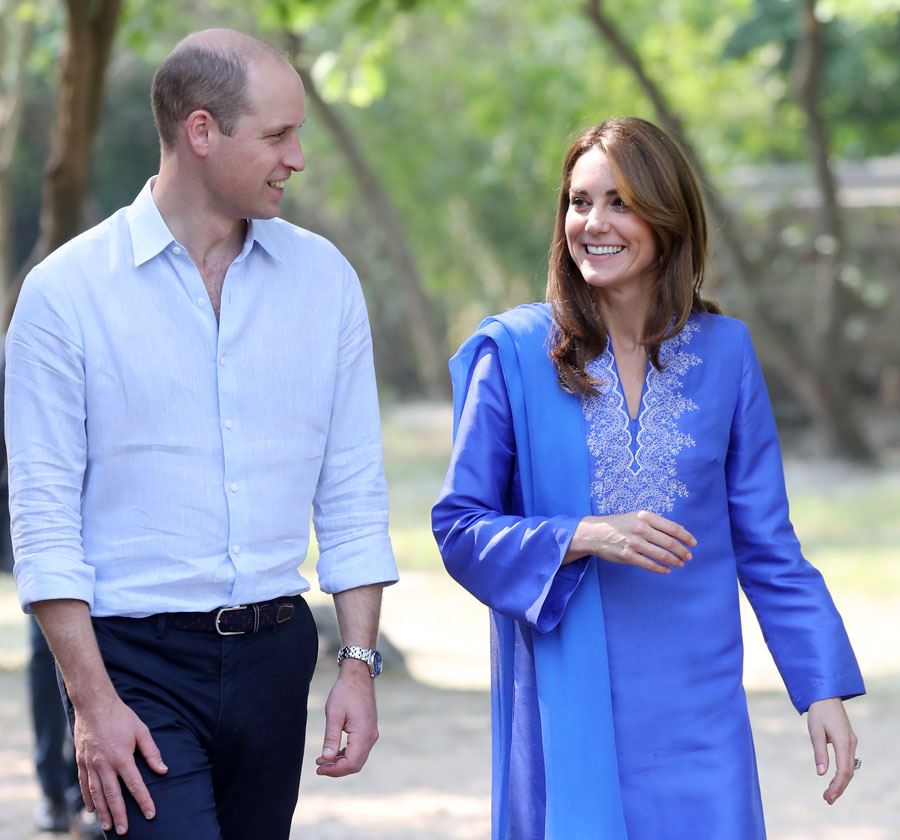 The Cambridges have arrived in Pakistan. The whirlwind five-day royal tour is a glamorous and polished undertaking, in marked contrast to the low-key, “relatable” tone of the Sussexes recent tour of southern Africa. The Kensington Palace Instagram account — @kensingtonroyal — bested the press pack at the airport right out of the gate. The palace’s official photographer was quick to splash online an instantly iconic photo of Catherine and William, silhouetted from behind as they strode off the plane and into the klieg lights of the red carpet rolled out on the runway. The parents of three had their first photo op as they disembarked their British Government Royal Voyager airplane after touching down Monday at Pakistan Air Force Base Nur Khan in Rawalpindi around 9:30 a.m. local time.

Like Prince Harry walking in Diana’s footsteps in Angola, this 2019 royal tour touches on places and causes close to Diana’s heart as well. It was in Pakistan that Diana came into her own as a force on the international stage. During the first visit in 1991, amid rumours of her troubled marriage with Prince Charles, she laid wreaths at Commonwealth graves, visited holy shrines like the Badshahi mosque in Lahore — where she was photographed barefoot in a green coat dress — and first heard about the horrors of landmines when she visited a centre for wounded Afghan refugees in Peshawar.

On later trips, after her divorce from Charles, Diana helped raise funds for a heart hospital with her old friend Imran Khan, who is now the prime minister.It was on the May 1997 trip that Diana, in a relationship with London-based heart surgeon Hasmat Khan, was said to have made a stealth visit to the doctor’s family in Lahore to meet his mother and discuss marriage. But Khan soon broke up with Diana, driving her into the arms of Egyptian socialite Dodi Al Fayed. In August 1997, Diana and Al Fayed were killed in a car crash in Paris.

Duchess Kate was clearly channelling her late mother-in-law, Diana, when she chose to get off the plane in a salwar kameez, a traditional garment of long tunic over pants worn by both men and women in the religiously conservative, predominantly Muslim country. Kate’s custom version by a royal favourite, designer Catherine Walker, in a delicate aqua, did double duty as diplomatic dressing: green is the national colour of Pakistan. The look was decidedly feminine and very chic, accompanied by Rupert Sanderson heels in the Duchess’s signature nude colour. She jazzed up the whole with a flawless blow-out and glittering drop earrings. Considering she has had to negotiate plane steps with multiple babes in arms on the couple’s recent family tours, on Monday she only needed to worry about the little cream clutch in her hands.

This is a high-stakes tour for the couple, and for royal diplomacy in general, with Brexit on the horizon. Security is very tight — some 1,000 Pakistani police officers are involved in keeping the second in line to the British throne safe. The goal of the “complex” tour is to showcase a modern Pakistan, “a dynamic, aspirational and forward-looking nation,” in the wording of the palace. For the country, which has suffered through years in the shadow of terrorism, the presence of the young royals is hoped to help encourage a return to tourism and investment. It is the first royal tour since Charles and Camilla came to the former colony in 2006.

Not since the Cambridges’ ambitious — and wildly successful — tour of Canada as newlyweds has a royal visit been so pivotal. After separating their household from that of the Sussexes, this trip marks the beginning of William and Kate’s grown-up, royals-in-waiting phase. They are assured, polished and professional in deploying their charm offensive. Yet more echoes of William’s mother in Pakistan, at a similar age.

Because Islamabad, where the couple will be based at the High Commissioner’s residence for the week, is nine hours ahead of Eastern Standard Time, the royal couple has already had a full day, and Kate has made a number of wardrobe changes already. The first stop was a school in the city, as education and supporting young people remain a firm focus especially for the Duchess. And the Duke took the opportunity to tie the visit to the government-run Islamabad Model College for Girls to mental health, a major focus for both of Diana’s sons and their wives.

For this outing, the Duchess wore a hand-embroidered kurta, a loose-fitting, collarless garment, in saturated blue. She chose a scarf by Pakistani designer Maheen Khan to complete the look. She kept that outfit on — with a quick change to flat shoes — as she and the Duke went on to Margalla Hills, where they set a leopard camera trap. Conservation is another cause that runs in the royal family.

We hope they were able to sleep on the royal private plane because this was all before lunch. For that meal, where they met with President Arif Alvi and Prime Minister Khan, Kate upped the fashion wattage with another Catherine Walker piece. The bright green coat-dress mimicked a salwar kameez, and she paired it with slim Maheen Khan trousers. She switched up her hairstyle as well, with a sleek “up-down” style.

Pulling out all the stops for maximum Instagram impact, the royal couple arrived tonight at their evening reception in a gaily painted three-wheeled tuk tuk. The event, held at the National Monument in Islamabad, is intended as a showcase for Pakistan’s music and culture industries.

The pair wore complementary green outfits: Kate in a sparkling, long-sleeved column gown in deep green by one of her most-trusted designers, Jenny Packham. She added a touch of the host country with her O’nitaa earrings, sourced locally. Kate offered up a glamorous and major fashion moment, topping a jam-packed first full day in country.

But for once, William might just have outshone his impeccably turned-out wife. The second in line to the throne chose traditional formal dress in the form of a dramatic, lattice-patterned teal sherwani. Cue the internet cheering his sense of occasion. And William pulls off the daring look quite handsomely.
The glam duo two mingled with the cream of Pakistan’s music, film and art scenes, with political and business leaders rounding out the mix.