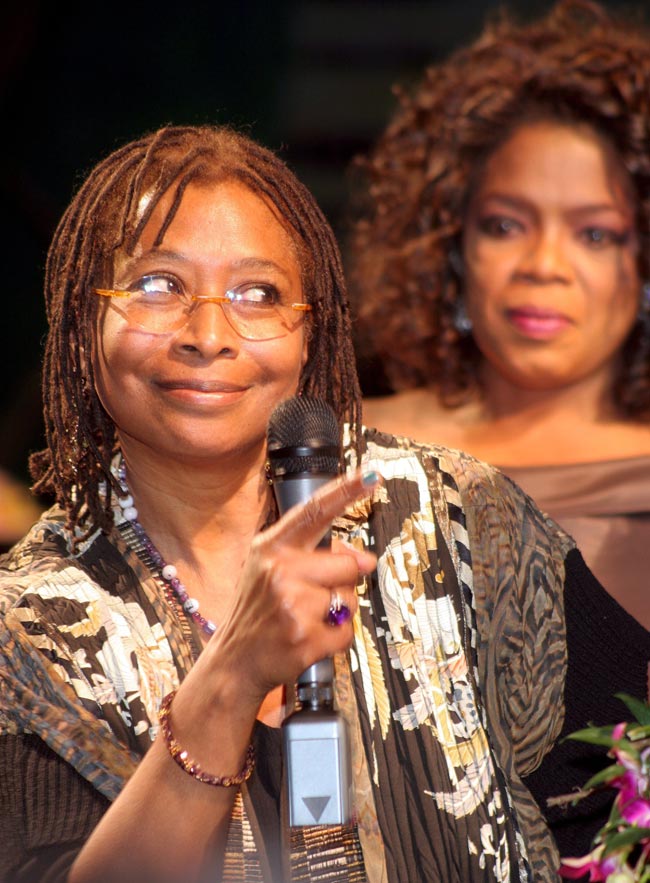 Writer, poet and activist Alice Walker celebrates her 76 birthday on February 9. Here she is with Oprah Winfrey for cast curtain call of The Color Purple in New York. Dec 1, 2005. Photo: Frank Albertson/Gamma-Rapho via Getty Images

“I think it pisses God off if you walk by the color purple in a field somewhere and don’t notice it. People think pleasing God is all God cares about. But any fool living in the world can see it always trying to please us back.” — From The Color Purple by Alice Walker, who turns 76 on Feb. 9.

It’s been 35 years since the movie The Color Purple and its breakthrough performances by Oprah Winfrey and Whoopi Goldberg. Based on Alice Walker’s 1982 novel about the abuse and spiritual triumph of a Black woman in the sharecropping American South, both the movie and book have been hailed as a “cultural touchstone for Black women in America, a kind of lingua franca of familiarity and friendship.”

With The Color Purple, Walker was the first Black woman to win both the Pulitzer and National Book awards. Her publications include seven novels, four collections of short stories, four children’s books and several volumes of essays and poetry. The child of sharecroppers in Georgia and the youngest of eight children, Walker has been a life-long campaigner for Black and women’s rights.

She famously championed the term womanist for Black feminists, “committed to survival and wholeness of entire people, male and female … Womanist is to feminist as purple is to lavender.”

To celebrate Alice Walker’s 76th birthday on Feb. 9, we’ve compiled some of her essential works. Walker’s most famous novel has sold more than five million copies in the U.S. and been translated into 26 languages. It was on the New York Times bestseller list for an impressive 25 weeks. The story depicts the lives of Black women in early 20th-century rural Georgia through a series of letters that span 20 years between sisters Celie and Nettie, who were separated as young girls.

Whoopi Goldberg starred as Celie in Spielberg’s movie adaptation, which earned 11 Oscar nominations —  but took home none. She did, however, win the Golden Globe. Oprah Winfrey, making her feature acting debut, also earned Oscar and Golden Globe nominations. Before Winfrey started her juggernaut book club, she bought and gave out multiple copies of Walker’s book.

Twenty years later, in 2005, the novel was adapted into a Tony Award-winning musical by Winfrey, Quincy Jones and Scott Sanders — and the same team is giving it the movie musical treatment with Spielberg on as a producer.

Why War Is Never a Good Idea In an interview with the New York Times in 2018 that sparked much controversy for another recommendation, Walker named this title as the one she wished U.S. President Trump would read.

“It is a book for children that I wrote many years ago. I believe it is immoral for adults to distort the reality of war to children. As a writer, I felt I could introduce war as the disaster it is for creatures — including children — and the planet.”

While it is presented as a children’s book, it should come with a warning. Publishers Weekly called it a startlingly graphic exploration of the horrors of war. In this 1996 memoir, Walker revisits the film set of The Color Purple, describing her personal reactions to the whole experience. This is not your standard “making-of-the-movie” indulgence. Walker received much criticism for allowing a white director to adapt her novel. And she was vilified for her depictions of black men abusing black women. As Walker writes, “I was called ‘liar’ and ‘whore’ and ‘traitor’ for no other reason than that people who have been made to depend on the approval of the powerful grow afraid of criticising themselves because the powerful may hear.”

The Way Forward Is With a Broken Heart

While this is a collection of short stories, there is a heavy autobiographical element.

“These are the stories that came to me to be told after the close of a magical marriage to an extraordinary man that ended in a less-than-magical divorce,” Walker writes. “I found myself unmoored, unmated, ungrounded in a way that challenged everything I’d ever thought about human relationships. Situated squarely in that terrifying paradise called freedom, precipitously out on so many emotional limbs, it was as if I had been born; and in fact I was being reborn as the woman I was to become.”

A keystone piece is the preface, “To My Young Husband” about her marriage to a Jewish civil rights lawyer and their time together in Mississippi and Brooklyn.

Her writing in this collection has been praised for the way it “probes the hidden corners of the human experience, at once questioning and acknowledging sexual, racial and cultural rifts.”

Anything We Love Can Be Saved: A Writer’s Activism Most profiles of Walker describe her as an activist as well as a writer. This 1998 collection of personal essays, remarks, letters, speeches and statements examines that identity. Covering a wide range of topics from religion to feminism and race, family to politics and social justice — it even includes some advice to Bill Clinton — the book begins with an autobiographical essay in which Walker examines her own spiritual growth and roots in activism, tracing it back to her  ancestor, May Poole, a former slave who outlived her owners and died at the age of 125.

Taking the Arrow Out of the Heart No roundup of Walker’s work would be complete with a collection of poetry. These new works — alongside their Spanish translations — were written between 2015 and 2016 and aim to speak to that particular time. Walker memorializes the lives of activists and artists, past and present, who’ve used their voices to fight on behalf of those most vulnerable.

It won the 2019 NAACP Image Award for Outstanding Literary Work  and has been celebrated for the way it asks readers to harness the divine that is inside all of us.