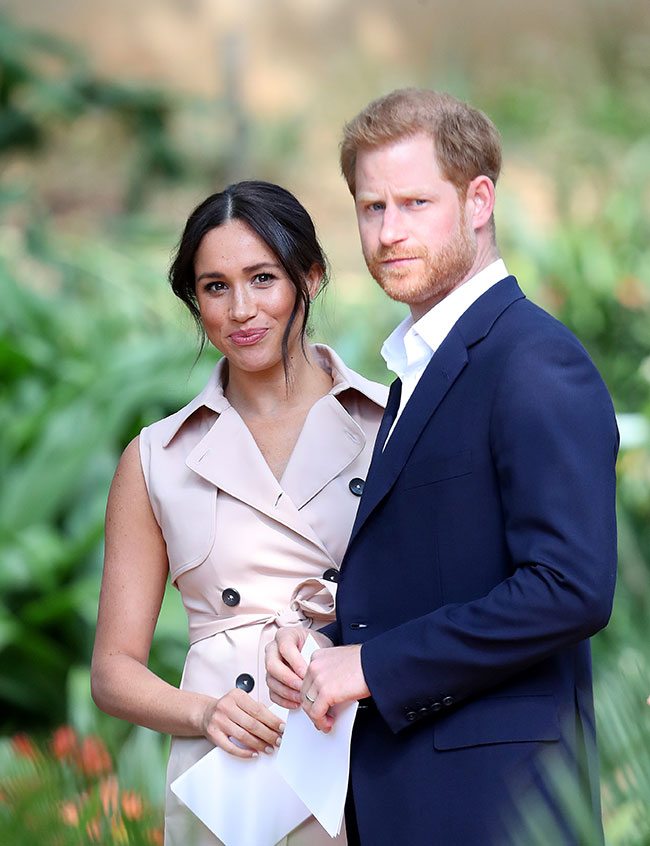 In a letter sent out Sunday, Harry and Meghan let the editors of four major media outlets know that they would no longer be engaging with them. Photo: Chris Jackson/Getty Images

It’s yet another strongly worded salvo showing that their relocation to Los Angeles has done nothing to ease tensions between Prince Harry and Meghan Markle and the British tabloid press. In a letter to the editors of The Sun, The Mirror, The Express and The Daily Mail released last night, the couple says, “We will not be engaging with your outlet. There will be no corroboration and zero engagement.” They describe the publications as “an influential slice of the media who seek to insulate themselves from taking accountability for what they say or print – even when they know it to be distorted, false or invasive beyond reason.”

The purpose of the letter is to set “a new media relations policy” as “the Duke and Duchess of Sussex now settle into the next chapter of their lives and no longer receive any publicly funded support.” But it is also meant to draw a clear battle line ahead of the first hearing – to be conducted virtually – this week in Meghan’s case against the Mail on Sunday, sister publication of The Daily Mail. Meghan is suing the paper for publishing extracts of a “private and confidential” letter she wrote to her estranged father, Thomas Markle, shortly after her 2019 wedding to Prince Harry.

The claim is that the Mail “chose to deliberately omit or suppress” some of the letter, and “intentionally distorted or manipulated” its meaning. Meghan “is seeking damages for alleged misuse of private information, copyright infringement and breach of the Data Protection Act. ”

The paper claims that Markle only released his daughter’s letter to them to prop up his side of the story after five anonymous friends of hers revealed its existence to People magazine for a cover story meant to defend Meghan.

An interview that Meghan gave last summer to promote her voice-over work for the Disney documentary Elephants – her fee going to Elephants Without Borders – which aired on Good Morning America was overshadowed by new revelations from the court documents. The show reported that they show Meghan denies any involvement in her friends’ interviews with People and that she blames the paper for the breakdown in the relationship with her father. Markle was besieged by the press before the royal wedding and, while the couple was asking them to give him his privacy, they were paying him for staged paparazzi shots. Markle then had a heart attack and was unable to travel to Windsor from his base in Mexico to walk his daughter down the aisle. The new documents say that despite reports to the contrary, she did offer her father a security detail and inquired about his health, and she has the messages to prove it.

At the time of the lawsuit, filed last October, Prince Harry had released his second letter excoriating the press for the wave of attacks on his wife, comparing it to the way they hounded his mother, Diana. He first returned fire with the unprecedented statement he put out in 2016, after the couple’s relationship was discovered, calling out the press for their racist and sexist treatment of Meghan and harassment of those in her life. In much the same vein, last night’s letter cites “lives completely pulled apart because salacious gossip boosts advertising revenue” and a refusal to “offer themselves up as currency for an economy of clickbait and distortion.”

The couple is reaching for higher ground, and the letter is careful to emphasize their belief in a free press “as a cornerstone to democracy, especially in times of crises” that “shines light in dark places.” It also insists, “This policy is not about avoiding criticism. It’s not about shutting down public conversation or censoring accurate reporting. Media have every right to report on and indeed have an opinion on the Duke and Duchess of Sussex, good or bad. But it can’t be based on a lie.”

Amidst it all, the couple has continued on their path of service. Although no longer senior working royals, last week both connected with British organizations they are still patrons of via Zoom. And on the ground in L.A. on both Easter Sunday and last week, they went door to door, still recognizable in the required face masks, delivering meals to the vulnerable and the most likely to be susceptible to the coronavirus on behalf of Project Angel Food, a charity created by spiritual guru and erstwhile Democratic presidential candidate Marianne Williamson in 1989.

Plans also continue for the launch of their American-based non-profit to replace their now defunct British foundation, SussexRoyal. Last month, it was revealed by The Telegraph, a newspaper not on the banned list, that the couple’s new philanthropic organization will be a many-pronged entity, involving multi-platform content for education, training and entertainment; health, mental health and emotional support services and counselling as well and volunteering and mentoring to launch under the name Archewell.

In a statement to the newspaper, the couple said: “Before SussexRoyal came the idea of Arche – the Greek word meaning ‘source of action.’ We connected to this concept for the charitable organization we hoped to build one day, and it became the inspiration for our son’s name. To do something of meaning, to do something that matters. Archewell is a name that combines an ancient word for strength and action and another that evokes the deep resources we must draw on upon. We look forward to launching Archewell when the time is right.”

As The Duke and Duchess of Sussex now settle into the next chapter of their lives and no longer receive any publicly funded support, we are writing to set a new media relations policy, specifically as it pertains to your organisation.

Like you, The Duke and Duchess of Sussex believe that a free press is a cornerstone to any democracy — particularly in moments of crisis. At its best, this free press shines a light on dark places, telling stories that would otherwise go untold, standing up for what’s right, challenging power, and holding those who abuse the system to account.

It has been said that journalism’s first obligation is to the truth. The Duke and Duchess of Sussex agree wholeheartedly.

It is gravely concerning that an influential slice of the media, over many years, has sought to insulate themselves from taking accountability for what they say or print — even when they know it will be distorted, false, or invasive beyond reason. When power is enjoyed without responsibility, the trust we all place in this much-needed industry is degraded.

There is a real human cost to this way of doing business and it affects every corner of society.

The Duke and Duchess of Sussex have watched people they know — as well as complete strangers — have their lives completely pulled apart for no good reason, other than the fact that salacious gossip boosts advertising revenue.

With that said, please note that The Duke and Duchess of Sussex will not be engaging with your outlet. There will be no corroboration and zero engagement. This is also a policy being instated for their communications team, in order to protect that team from the side of the industry that readers never see.

This policy is not about avoiding criticism. It’s not about shutting down public conversation or censoring accurate reporting. Media have every right to report on and indeed have an opinion on The Duke and Duchess of Sussex, good or bad. But it can’t be based on a lie. They also want to be very clear: this is not in any way a blanket policy for all media.

The Duke and Duchess of Sussex are looking forward to working with journalists and media organisations all over the world, engaging with grassroots media, regional and local media, and young, up-and-coming journalists, to spotlight issues and causes that so desperately need acknowledging. And they look forward to doing whatever they can to help further opportunities for more diverse and underrepresented voices, who are needed now more than ever.

What they won’t do is offer themselves up as currency for an economy of clickbait and distortion.

We are encouraged that this new approach will be heard and respected.