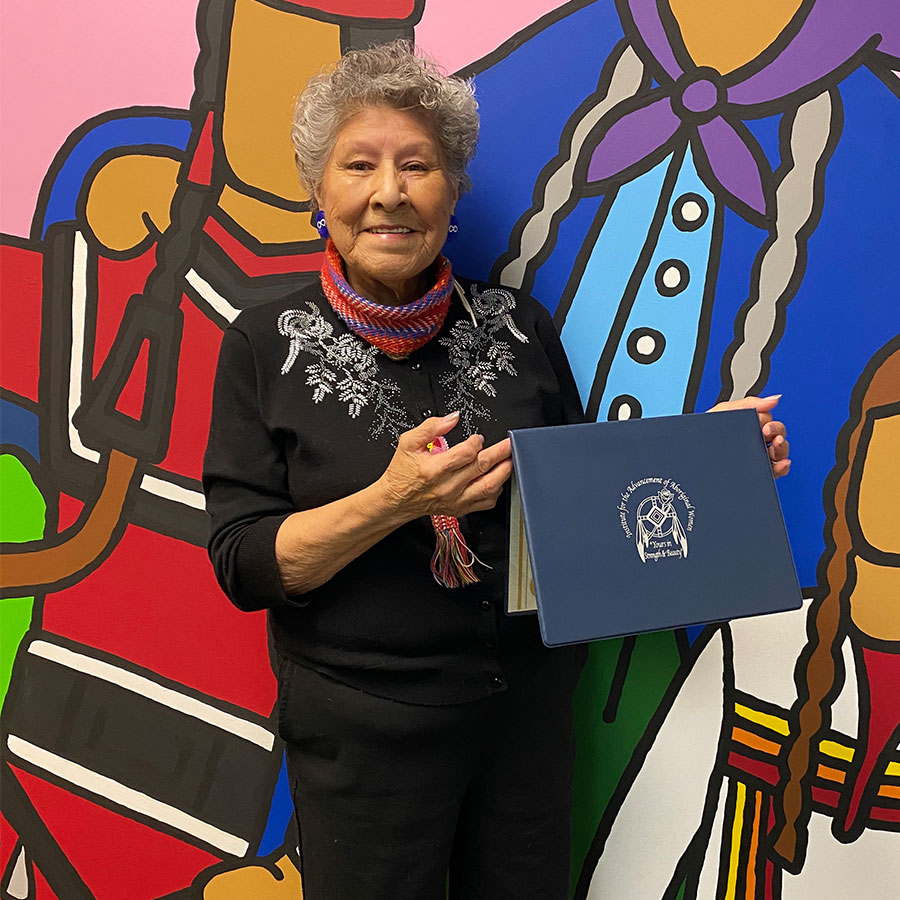 Indigenous Elder Elsie Paul, 78, seen here in a 2000 photo holding her Esquoa Award from the Institute for the Advancement of Aboriginal Women, has earned more than 64,000 followers on TikTok with her traditional Métis-Cree teachings. Photo: Courtesy of APTN

August 9 marks the United Nations’ annual International Day of the World’s Indigenous Peoples — an occasion during which “people from around the world are encouraged to spread the UN’s message on the protection and promotion of the rights of Indigenous peoples.”

This year’s theme is “The role of Indigenous women in the preservation and transmission of traditional knowledge.” To mark the occasion, we revisit our story on Métis-Cree elder Elsie Paul — a retired social worker who, at age 78, is utilizing the social media platform TikTok to spread knowledge of her Indigenous culture to younger generations.

Amidst all the dancing trends on TikTok you might find Elsie Paul, a Métis-Cree elder who’s mission on the app is more ambitious than simply accumulating likes or follows.

The 78-year-old retired social worker — who was born in Wolf Lake, a former Métis settlement in Alberta located a three-hour drive northeast of Edmonton — joined the platform so she could continue teaching younger generations about the heritage and traditions of her people during the pandemic.

“I learned from the elders, whatever your difficult journey, don’t focus on it,” she says of the pandemic. “Try, because it’ll give you extra credentials once you overcome the barriers.”

Known by the nickname Techno Kokum (Techno Grandmother), the Edmonton resident has amassed more than 64,000 followers — many of whom are Indigenous youth.

“It’s so important that we teach the younger generation,” Paul says of her work.

A skim through her TikTok videos sees her dole out teachings on everything from the significance of the eagle feather to the traditional understanding of kinship in her culture.

Paul can empathize with the youth’s disconnection from their culture. Like many Indigenous people, she’s felt the impact of the generational trauma inflicted by colonization and the residential school system.

At the age of two, Paul relocated to Saddle Lake in central Alberta after the province withdrew the Wolf Lake Métis settlement and displaced the entire community. Her parents, who suffered the horrors of the residential school system growing up, protected Paul from the same fate. But when Paul finally attended a day school on the reserve at the age of 11, she was punished for speaking Cree, the only language she knew.

“When I was speaking Cree in school I got strapped. I was so confused about that,” she says. “And then I would be staying all afternoon. I couldn’t go for recess because they told me I didn’t deserve to go.”

Paul adds that residential school left her parents ill-equipped to teach her about her culture as well.

“We lost our culture and trauma set in. They don’t have to be on that same journey,” she says of the younger generations. “They can all be aware, have the knowledge and wisdom.”

Paul’s teenage years also included some dark times. After moving to Edmonton at the age of 16, she began abusing drugs and alcohol. But she says reconnecting with her culture signalled a major turning point in her recovery.

“Even though there’s so much trauma, once we know the history we go into recovery. That’s why I do what I do right now.

“There’s a reason why we went on that hellish journey,” she says, before reiterating her unwaveringly positive mantra. “Once we heal, we get gifted with extra credentials.”

Paul’s troubled youth would guide her toward a new path. Working closely with a social worker through her addiction, she was inspired to join the profession. After earning a social work diploma as well as an addictions certificate, she carved out an impactful career counselling at-risk members of the Indigenous community in various social service positions. In 2000, her work with women in conflict with the law earned her the Esquao Award from the Institute for the Advancement of Aboriginal Women, which recognizes and celebrates the accomplishments of Indigenous women.

For Paul, culture can go a long way in uniting us as well.

“Once we spend time to get to know each other, we develop a different view,” she says. “It’s because we realize other cultures are not that different. We all have similarities.”

Indigenous Day Live’s focus on highlighting 2SLGBTQ performers, for example, brought to mind what settlers can learn from the Indigenous community’s understanding of gender roles — specifically the importance of Two-Spirited people in their traditions. The gender identity, which has been present in Indigenous culture for centuries, describes members who had both a masculine and feminine spirit and occupied a distinct alternative gender status. They also took on important roles in the community, such as healers, matchmakers and counsellors.

“There was no discrimination against Two-Spirited people a long time ago,” Paul explains. “If there was a Two-Spirited person, if a man was feminized and he wanted to do woman things, they made him a special dress and gave him woman things to do.

“They’re part of the family [and] the community.”

Older Indigenous people also held an important position in the community well into old age. It’s a role that Paul has strived to recover, not only for herself, but also for other Indigenous grandmothers.

Soon after retiring at the age of 65, she started the Kokum Kisewatisowin Society, a group of retired professional Indigenous women who work to reclaim the traditional ways of kokums (grandmothers).

The Cree word kisewatisowin, Paul explains, translates to “the unconditional love of grandmothers.”

“I started listening [to] grandmothers. They were going through the same journey as I was,” Paul says of how she came up with the idea for the group.

“They never retired traditionally. Grandmothers and grandfathers were always involved with the community, teaching the younger generation and the community, because they have lots of wisdom and knowledge.”

Meanwhile, her teachings on social media have earned her celebrity status in her community. Upon arriving at one of her workshops recently, she says a group of young men recognized her from TikTok.

While she admits it’s a strange feeling, she says the newfound fame helps her identify with one of her personal heroes.

“Elvis Presley has been my hero for years,” Paul says, adding that they share the same initials. “I read somewhere, that when he started getting famous, he said ‘there’s no privacy.’

“That’s where I’m at right now, it feels a little uncomfortable,” she adds with a laugh. “But I have to adjust to it. It’s God’s journey in action.”