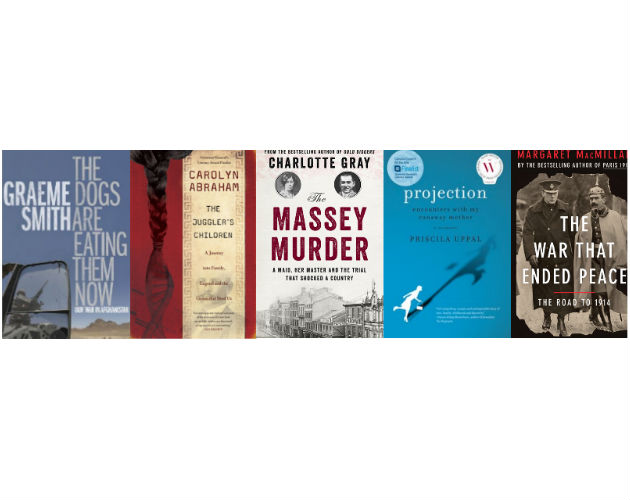 From true crime, to wartime chronicles, to personal family narratives, non-fiction offers many windows on our world and this past year offered a plethora of enlightening reading experiences. Not sure where to start? Consider one of these engaging titles.

The War That Ended Peace: The Road to 1914 by Margaret MacMillan
A richly explored account of the calm before the storm, this is a fascinating look at Europe from 1900 up to the outbreak of World War I, one of the defining periods and events of the twentieth century. As we approach the centenary of the Great War, MacMillan sets out to show that the path to this war was not inevitable, as widely accepted, and that this seminal period in time has many parallels to the present.

The Massey Murder A Maid, Her Master and the Trial That Shocked a Country by Charlotte Gray
Gray revisits the headline-making 1915 murder of Charles Albert Massey, a member of the prominent Toronto family, who was gunned down by his maid, a young British immigrant who said she feared his sexual advances. A gripping courtroom drama that also illuminates life in Toronto at the turn of the 20th century.

The Dogs Are Eating Them Now: Our War In Afghanistan by Graeme Smith
An eye-opening account of the war in Afghanistan from reporter Graeme Smith, who covered the conflict for the Globe and Mail from 2005 to 2009. This highly personal narrative of the war looks at the corruption of law enforcement agents, the tribal nature of the local power structure, and the economics of the drug trade—and at the mistakes, catastrophes, and ultimate failure of the West’s best intentions.

The Juggler’s Children: A Journey into Family, Legend and the Genes that Bind Us by Carolyn Abraham
This engaging family memoir that takes readers on a ride through history and modern science, as Abraham searches for answers about her widely scattered family tree in India, China, Jamaica, the United States and Canada. Using her investigative journalistic skills and taking advantage of the most recent genetic science, she explores the power of our DNA to the solve the mysteries of one’s family.

Projection: Encounters With My Runaway Mother by Priscila Uppal
Poet Priscila Uppal was just eight year’s old when her mother drained the family’s bank accounts and disappeared, abandoning Uppal’s quadriplegic father. After Uppal finds her mother decades later she travels to Brazil to see her — an emotional reunion that is alternately shocking, hopeful, humorous, and devastating. A brutally honest memoir that takes a probing look at a very unusual mother-daughter relationship.