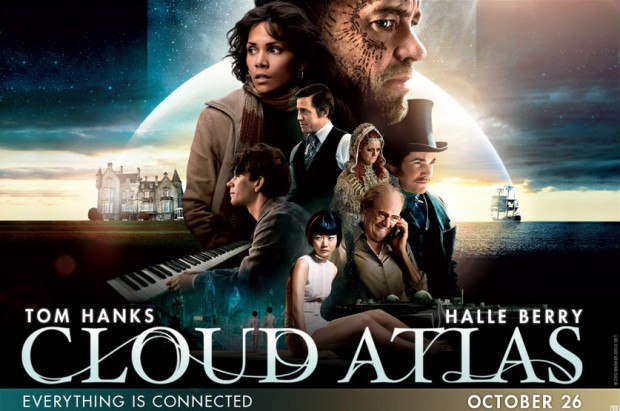 Choice Quote “Our lives are not our own. We are bound to others, past and present. And by each crime and every kindness, we birth our future.”

What’s it about? Deep breath, and here we go: Cloud Atlas tells multiple stories, simultaneously, of souls reborn throughout time, from the Pacific Islands in 1849 to 1930s Cambridge, 1970s San Francisco, modern-day London, a futuristic totalitarian state in the year 2144 and an even further futuristic time in which humans essentially return to a more primitive life. These characters (the souls) illustrate the effect past actions can have on future civilizations and how lives are bound to each other, unable to be separated by time, age or evolution. Also, there are aliens. Confused yet?

Is it any good? This is the million-dollar question. The principle cast, including Hanks, Berry, Broadbent, Weaving and others, play multiple (up to seven) roles each – represented in each time and age as a different character. The makeup and special effects used to alter the appearances of the actors, from doctors to demons to tribal warriors and opposite-sex characters, are some of the best you’ll ever see and deserves every statuette it’ll likely scoop up come award season. Some of the actors playing the various characters are obvious while others are not (if you can spot Halle Berry during the futuristic totalitarian age, you deserve some sort of prize. Hint: she doesn’t play a woman). While there isn’t a weak link in this all-star cast, performances from Hanks (brilliant as usual), Broadbent (the film’s much-needed comic relief), Weaving (the most versatile and impressive of the bunch) and South Korean actress Bae Doona (emotionally evocative and powerful) stand out from the pack and, again, will likely generate lots of award talk.

So, you say, if the acting and effects are so good, why balk at full praise for the film? Well, a few reasons. First, the plot is quite complicated and, clocking in at almost three hours, Cloud Atlas is a lot to take in (at times, it feels that some scenes could have been taken out). There are a number of instances when the film seems it might be heading for the end, and then it keeps going. The directing is fine, and the special effects overall are magnificent, but there is some cheesy dialogue, like rhymes about our lives from womb to tomb, that comes off more like a morbid lullaby than an iconic movie line. Most of the plotlines are intriguing while a few of the stories seem to drag on.

Overall, the merits of this film can only be judged by each individual viewer. You will either proclaim it an epic or nothing more than an epic bore. There’s little middle ground. And the fact that it proves so polarizing is reason enough to check it out for yourself.

Can I bring my kinds and grandkids to see it? There’s some nudity and violence, but the length of the film is the main issue. It’s rare to get kids to sit still and watch one thing for three hours straight, so you may want to wait for the DVD so you can fast-forward to the explosions and chase scenes if need be.

See it in theatres or rent it? Theatres, unless you want to show the grandkids, in which case see the above.

Overall Popcorn Rating: 3.5 kernels out of 5.