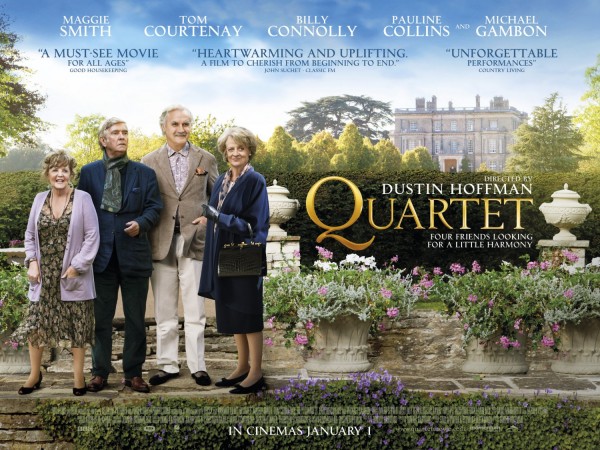 See what we thought of Dustin Hoffman’s first film as a director and his boomer cast!

Choice Quote: “Old age is not for sissies.”

What’s it about? Beecham House, a retirement home for opera singers and classical performers, is in need of a financial injection. The solution: a grand concert to mark composer Giuseppe Verdi’s birthday and raise the much-needed funds. What ensues is a battle of wits and egos in a desperate plea to get the show off the ground and keep the home’s doors open.

Is it any good? Dustin Hoffman had an eventful 2012. The 75-year-old received Kennedy Centre honours for his remarkable career while making his directorial debut with this film. Like many Hoffman fans, I really, really wanted to like Quartet.

The movie is not bad. In fact, it’s likable in many ways. Dame Maggie Smith, not surprisingly, is fantastic as cantankerous soprano Jean Horton, who drops lines like, “I never took less than 12 curtain calls.” The major conflict in the film is between her and ex-husband Reg Paget (Courtenay), who is none too pleased with her arrival at the home. The hopes of the show are pinned on a headline quartet performance from Verdi’s Rigoletto by Paget, Wilf Bond (Connelly), Cissy Robson (Collins), and Horton, so a lot of the film focuses on Paget’s stubborn refusal to be involved if Horton is.

Courtenay and Smith possess a natural chemistry, and Collins is lovable as Cissy, who remains eternally cheerful as her mental faculties decline. Connelly, no surprise, is the comic relief, though his sex-crazed character wears thin when he strays into creepy old man territory, making advances on anything with breasts and a pulse.

Hoffman added a nice touch by featuring a number of real-life former opera singers, composers, and classical musicians, identified during the closing credits with a name and photo from their performing days. The film’s score is a treat, and Paget’s discussion with a group of visiting high school students, philosophizing on opera (“Rich people took opera and made it something it’s not”) and drawing comparisons with rap music, proves an intriguing exchange.

Yet, taken as a whole, the film is a very modest work. Yes, we see the effects of aging on these performers – some are played for laughs while others are played for sympathy – but there’s more to aging than memory loss, bad tickers, and sore joints. Quartet feels most authentic when Horton is forced to accept the toll the years have taken on her talents, or the relationship between her and Paget, or even the conversations between Paget and the high school students – in other words, when it digs deeper than the ailments you see discussed in television commercials for pain relief pills.

Dustin Hoffman’s first turn in the director’s chair isn’t a disappointment by any means, but had it been an unknown talent at the helm this film wouldn’t necessarily prove a career jump starter.

Quartet certainly has its moments, and it’s not a bad film per se. Perhaps we were just expecting a little more.

Can I bring my kids and grandkids to see it? Unless they’re old enough to understand sexual innuendo, you’re going to have to explain a good deal of Billy Connelly’s dialogue.

See it in theatres or rent it? Theatres if you have time, but renting won’t ruin the experience.

Overall Popcorn Rating: 3 kernels out of 5