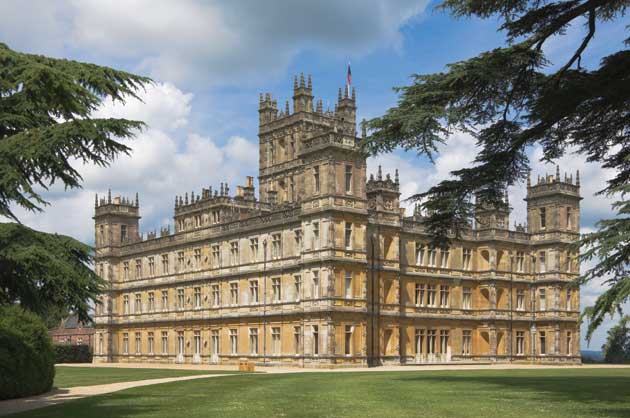 Highclere Castle, where the show is filmed

Below Stairs is the memoir that started it all, written in 1968 by actual kitchen maid Margaret Powell who toiled in an English estate in the 1920s. This book was the inspiration for the 1970s television serial Upstairs, Downstairs and its 2010 reboot, which has subsequently ceased production. But for Fellowes, his lifelong interest and exposure to England’s upper crusts inspired his screenplay for Robert Altman’s 2001 film Gosford Park, which netted him an Oscar for Best Original Screenplay.

Like Downton Abbey, the film is set in a stately country manse with aristocrats and the help getting up to no good (think murder and mayhem). Also starring Maggie Smith, Helen Mirren and enough English acting luminaries to give the Harry Potter franchise a run for the money. His screenplays for Vanity Fair and The Young Victoria also kept him abreast of all things aristocratic.

In the tradition of taking the brass ring and running to the hills comes Great Houses with Julian Fellowes. This two-part series has Fellowes uncovering the lurid secrets and amusing anecdotes of England and Wale’s best-known mansions. As yet, no air date has been set for Canada.

And we’re not just talking about Shirley MacLaine’s much ballyhooed appearance during season 3. No, we mean Fellowes’ latest creative venture – The Gilded Age. This American period drama is set among New York’s finest and wealthiest during the late 19th-century (Edith Wharton fans should also tune in). While only at the pilot stage for NBC at this time, we have high hopes for a similar soapy romp in the colonies.

It’s a grand time to be in England if you’re over 60, a man and a television writer. The unprecedented success of the Emmy Award-winning Downton Abbey was sure to spawn other period piece miniseries and, with the 63-year-old Fellowes at the helm, it paved the way for other men of letters and longevity to take the reins.

First up was Parade’s End, which premiered on HBO in February and stars British heartthrob, Sherlock actor Benedict Cumberbatch, as an aristocrat in a love triangle with his nasty wife and a suffragette. Set during the First World War, the series was written by Sir Tom Stoppard, 75, the playwright and Oscar-winning screenwriter (for Shakespeare in Love), who returns to the small screen after a 30-year absence.

Produced by the same networks as Downton, the U.K.’s ITV and America’s PBS, Mr Selfridge premieres in North America on March 31. Created by 76-year-old Andrew Davies based on the book Shopping, Seduction and Mr Selfridge, it tells the story of Harry Gordon Selfridge, the Yankee who started the super chic department store in London of the same name. The remarkably prolific Davies has a long string of hit adaptations including Pride and Prejudice (the 1995 miniseries that catapulted Colin Firth to superstardom) and Charles Dickens’ Bleak House and Little Dorrit as well as the feature film script for Bridget Jones’s Diary. Take that, Baron Fellowes!

You may not have a lab named Isis at your feet or a butler named Carson to bring you a snifter of brandy but you can settle into your wingback chair and peruse this collection of books fit for the most ardent Downton fan.

• The World of Downton Abbey and its follow-up, The Chronicles of Downton Abbey: A New Era by Jessica Fellowes (Julian’s niece) promises the secret history and behind-the-scenes drama of the series.

• Beyond Downton Abbey: A Guide to 25 Great Houses is a guidebook to the grandest houses, castles and palaces in England and Wales.

• The Real Life Downton Abbey: How Life Was Really Lived in Stately Homes a Century Ago is a reference book that examines the morals, etiquette and style of the Edwardian period, using the TV show to reel you in.

• Lady Almina and the Real Downton Abbey: The Lost Legacy of Highclere Castle is the tale of the stately pile where the show is filmed. Written by current resident, the Countess of Carnarvon.

• While We Were Watching Downton Abbey, a novel by Wendy Wax, is about a group of friends who gather to watch the show and how their own lives become as complicated as the characters on it.

“If you have the misfortune to be born into a generation which must earn its living, you might as well do something amusing”

–Julian Fellowes, recalling a bit of inspiring advice from his father